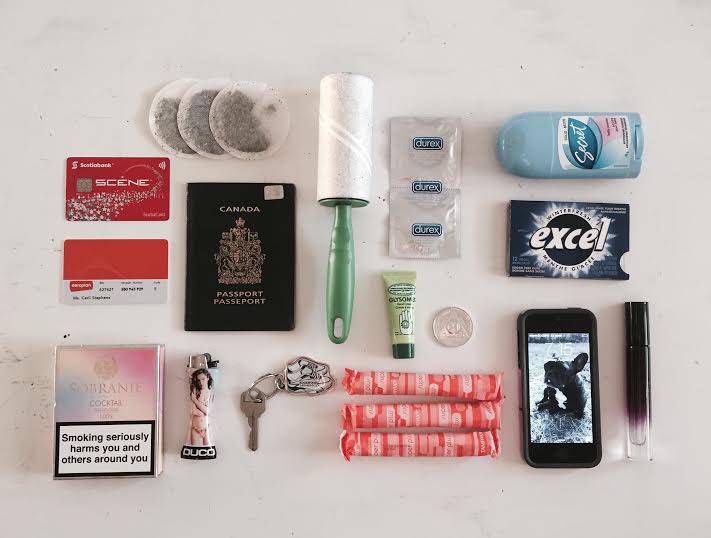 PURSONALITY: WHAT YOUR BAG SAYS ABOUT YOU

I was sitting on the bus this morning and the woman across the row revealed her whole self to me. She didn’t know she had done it, but with one miscalculated move, she presented me with every bit of data I needed in order to fully analyze her entire existence. While juggling her phone, a travel mug, and a stack of papers, she dropped her bag and laid its contents out before me, offering an unaudited look into the most private corners of her world, the depths of her purse.

In less than a minute, while she scrambled to corral her possessions, I was able to assess, understand, and then judge this complete stranger. Based on my findings, I learned that she was a germaphobic (two bottles of Purell. TWO!) and a sugar fiend with a scratch and win gambling addiction. Based on the fact that she also had two Slimfast shakes, I ascertained that she was a weight-conscious individual, in spite of the open bag of Nibs that were now mostly spilled out across the floor of the bus. A metal nail file glinted in the light, and was in express disagreement with her deeply bitten nails.

This is a woman in conflict, I thought. Trying to shed pounds while sneaking bites of candy, wanting to maintain her nails, and sneaking bites of those too. My guess is she was a fiercely self-conscious woman who has spent much of her life trying to reconcile the difference between the person she wants to be, and the person she is. I felt sad for her.

Of course, I could be totally wrong. But this has never stopped me before. Then I got to thinking. If someone were to see inside my bag, what would they think of me?

Currently in my bag, I have my bank card, an Aeroplan card, a passport, some tampons, some perfume, a lint roller, hand lotion, a 24-hour chip, some tea bags, deodorant, gum, one key, two condoms, my phone, some rainbow smokes, and a lighter with a naked girl on it.

This actually says more about me than I’d like it to. Let me explain.

I have a bank card. Nothing else. I don’t have a credit card or cash because I don’t trust myself with either of those things. I find cash hard to keep track of (“Well I’ve got it, so I should just spend it!”) and the idea of spending money before I have it gives me anxiety. This would indicate, accurately, that I am a mixture of the worst kind. A careless person with control issues.

I carry my passport with me because I’ve never had a driver’s license. Ever. That’s right, I’ve never driven a car. When I really think about it, it’s because I’ve never really had to. With two older brothers all throughout high school, the subway in Toronto, cabs in New York, and friends in Vancouver, there has never been a city I’ve lived in where driving was a must. This illustrates my laziness, as well as my sense of entitlement.

I have perfume, deodorant, and gum. These are all, in effect, different ways to mask scent. A normal person might have one of these things, but likely not all three. This might suggest that I’m in some ways quite insecure, and I go to great lengths to hide a secret that all of us share. Sometimes people smell. I’m just not confident enough to own that.

I have an iPhone because, after all, it’s 2015. I’m a woman of the times, though never on time, despite the fact that my iPhone tells time.

In one purse, there are two things that go in my vagina. Tampons and condoms. This shows that I am prepared for anything, all the time. Not often do you need both of these things readily available at once. Usually if you’re using one, you don’t need the other. This would either point to the fact that I’m a dirty, dirty little girl who’s always DTF, or that I am generally indolent and don’t cycle the contents of my purse often enough. (But you’ll never know! Wink.)

I have no clue why I have an Aeroplan card.

A 24-hour chip is something you pick up at 12-step meetings to signify that you have been clean and sober for one day. I grabbed this one probably five or six years ago, and have managed to hang on to it ever since. Unfortunately, this was not the last of the many, many 24-hour chips I have collected. At the very least, this shows that I’m profoundly sentimental.

I have only one key. I used to have a key ring with thousands of keys on it. It took me until my 28th year to realize that I didn’t know what most of them were for. From this, you can tell that I am a fan of simplification these days.

I have hand lotion because my hands are uncharacteristically rough. Ask anyone who has ever touched them. This might suggest I’ve been doing manual labor all my life. But this would be the wildcard element. I’ve never even mowed a lawn.

The lint roller is because I have a dog. The tea bags are for when I am thirsty for tea. From this, you’ll know I’m practical.

The rainbow cigarettes and ridiculous lighter speak volumes. These are symbolic of a gratuitous need to overcompensate. I am actually terribly embarrassed about my pack-a-day smoking habit, but I choose to draw attention to it with pastel coloured bitch-sticks, and boobies on my lighter. This shows that when my shame flares up, I use humour to ease the tension.

It’s actually kind of interesting to consider the contents of your bag and wonder if just a few small changes were made to what you carry, perhaps you can also alter the way in which you carry and conduct yourself.

What’s in your bag? And what does it say about you?