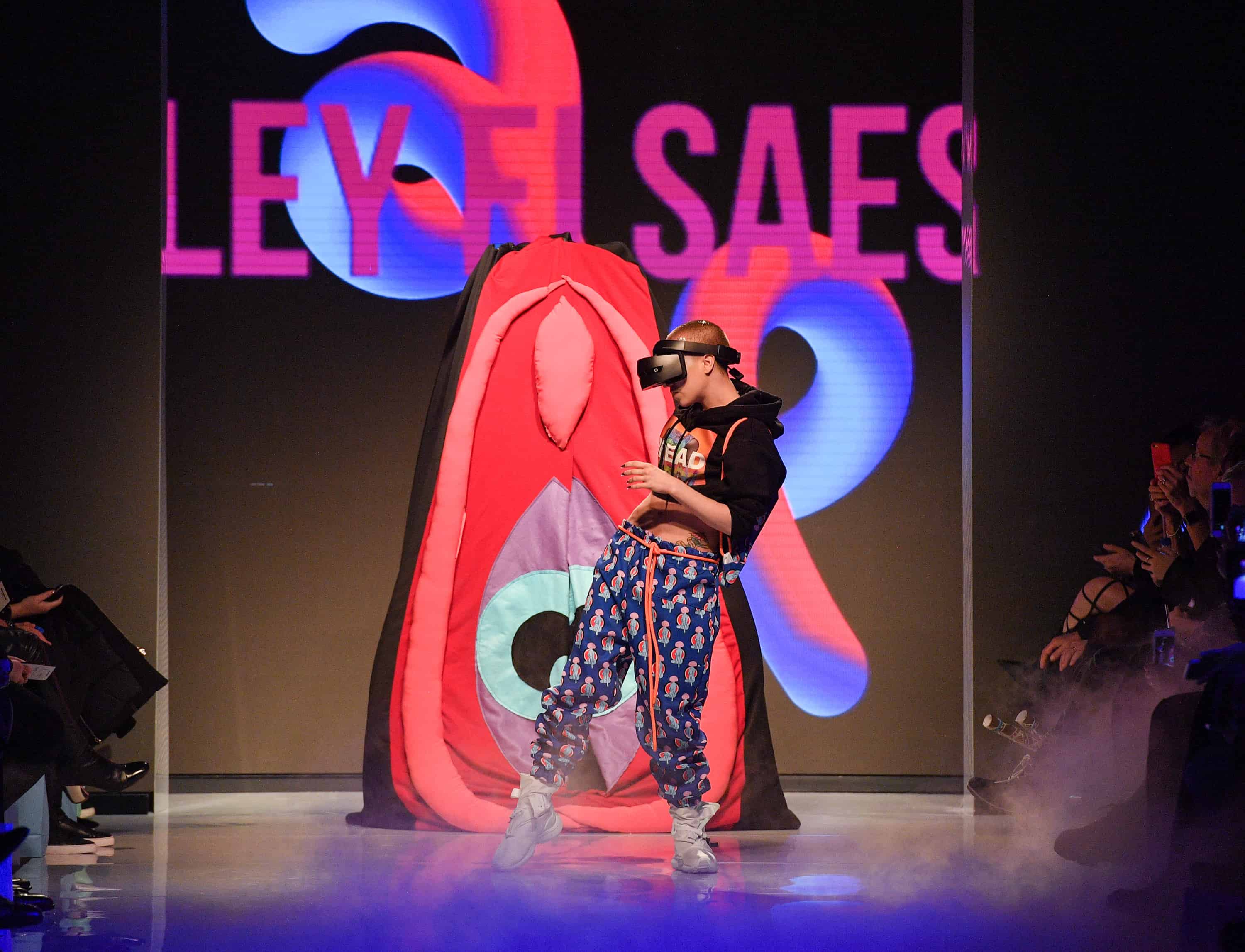 Fashion designer Hayley Elsaesser is known for the neon-bright gender-defying apparel with out-of-this-world prints, but her latest show, “Cosmic Dread” (at Toronto Fashion Week), took us deeper into space where we realized the future is nothing to dread and everything to hope for.

Last week, I met Hayley at her Queen West boutique to check out the new vagina-eye (#eyegina) prints and also get inside the Aussie/Canadian designer’s head. No, but really: I was asked to put on a Windows Mixed Reality Headset to get a 360 immersive view of Hayley’s brain, as created with the help of a team at Microsoft who, like most of the fashion world, are awed and inspired by her brilliant digital drawings. 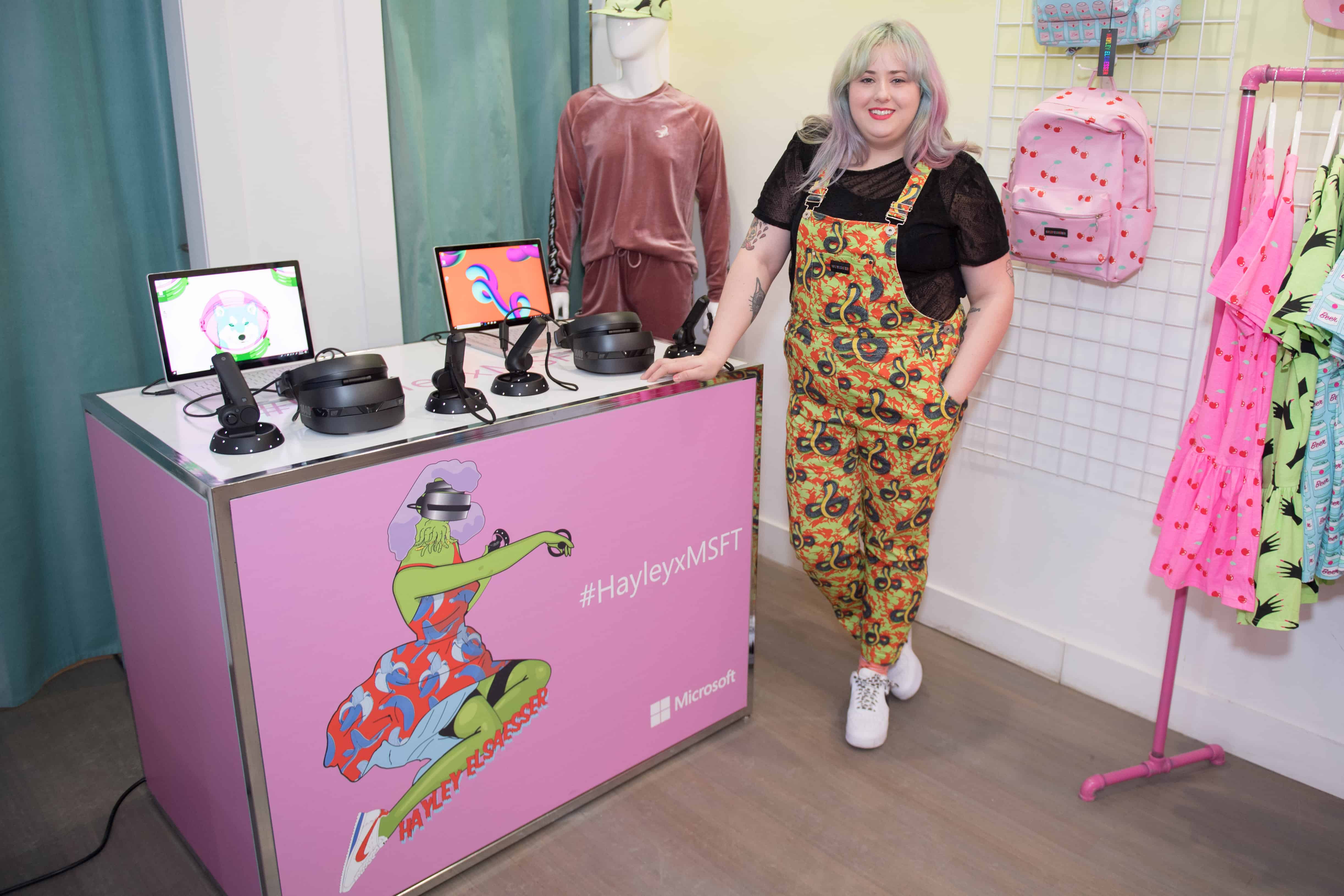 So, while I was standing in the store exploring Hayley’s imagination of floating Shiba Inu Dog Astronauts (inspired by her own dog, Miso/Misato) and cat-eared planets, interacting with VR thumb-size Hayley, the real life-size Hayley was talking in my ear and describing her creative process: “If I get really stressed out, I zoom out and out to picture how small I really am.” It was trippy, and at one point, I nearly fell to the floor while enthusiastically exploring the cartoon-like intergalactic Hayley Elsaesser galaxy.

I discovered that while I think it’s magnificent, I’m not quite ready for the VR world just yet; my body can’t quickly adapt to the virtual footing. Luckily the Microsoft team was there to guide me to the couch and pass me a Perrier. Space travel is fun, but I am still just an earthling who finds regular feet-on-the-ground life challenging enough.

The floating-in-space vantage was cool, but when I was seated at the fashion show, watching Cosmic Dread unravel before me, things became abundantly clear: I realized that the future planet in Hayley’s imagination–where no hierarchy exists between beings, where uniqueness is celebrated, and where confidence is self-defined, where fashion is fun and boundless, where usual catwalk heels are replaced with metallic Nike sneakers, and where models strut and smile–is already alive and present. It may not be everywhere but it definitely is in Hayley’s world. It was both electrifying and arousing to watch.

With a cloud of smoke, gender illusionist William Lavinia emerged from the giant vagina eye cave, VR headset on, landing on the brand new planet. Trepidatious at first, William got comfy fast, which is when we–row after row of eager fashion beasts–felt equally curious, but at ease. For this, my friends, is an exciting planet bursting with colour and full of possibility. Then one after one, old ideas were crushed as humans of all shapes and sizes stormed the runway, wearing #eyegina prints, faux snakeskin, bright textural fabrics, and patches that read “The Future Is Accessible.” Oh yes, the new world is invigorating.

Be brave / be kind / be bold / be you, and fuck the establishment. In the new world, we create the rules, and all are treated equal. Or, at least, that was my takeaway that still has my body buzzing. Total hotness. 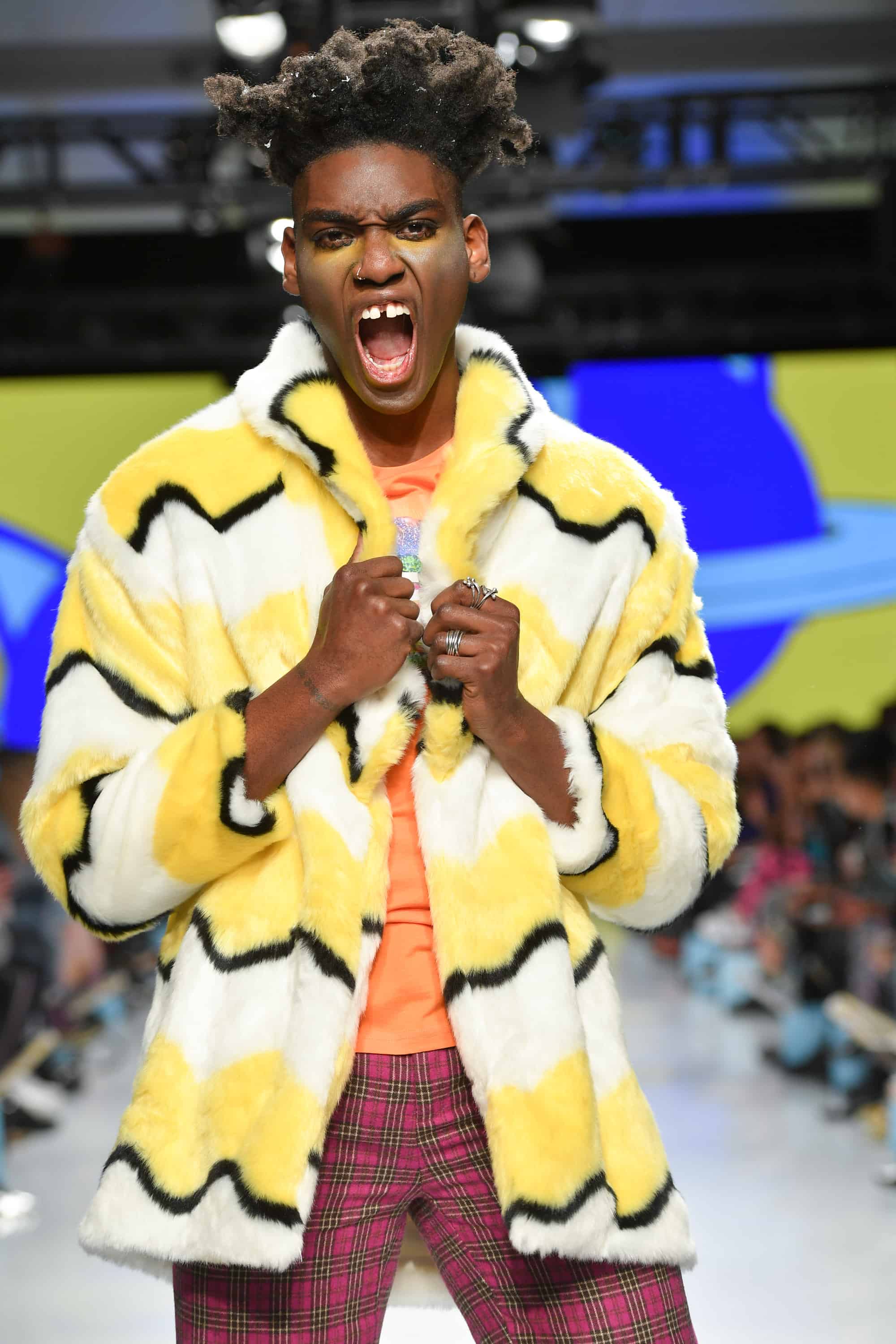 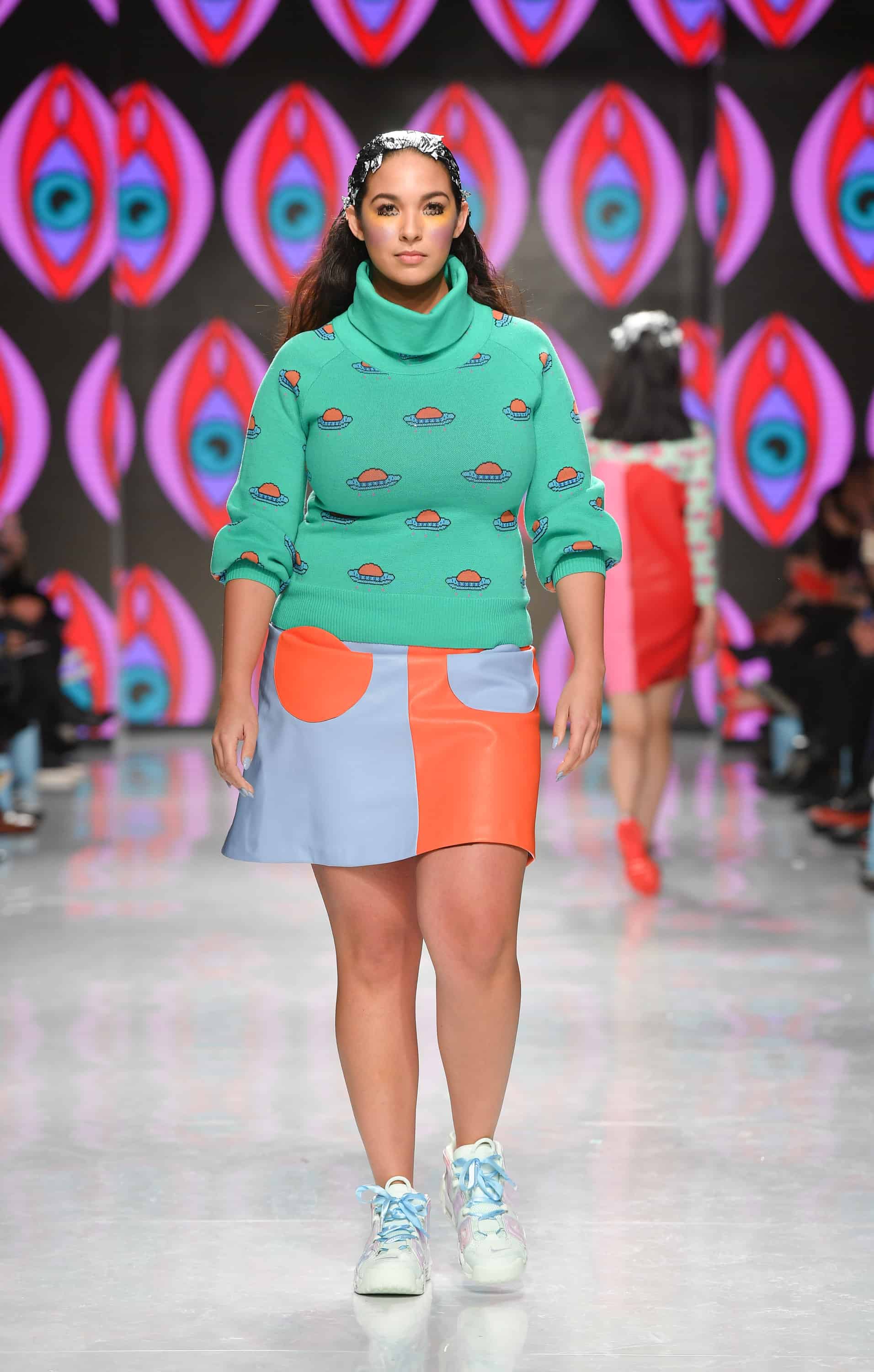 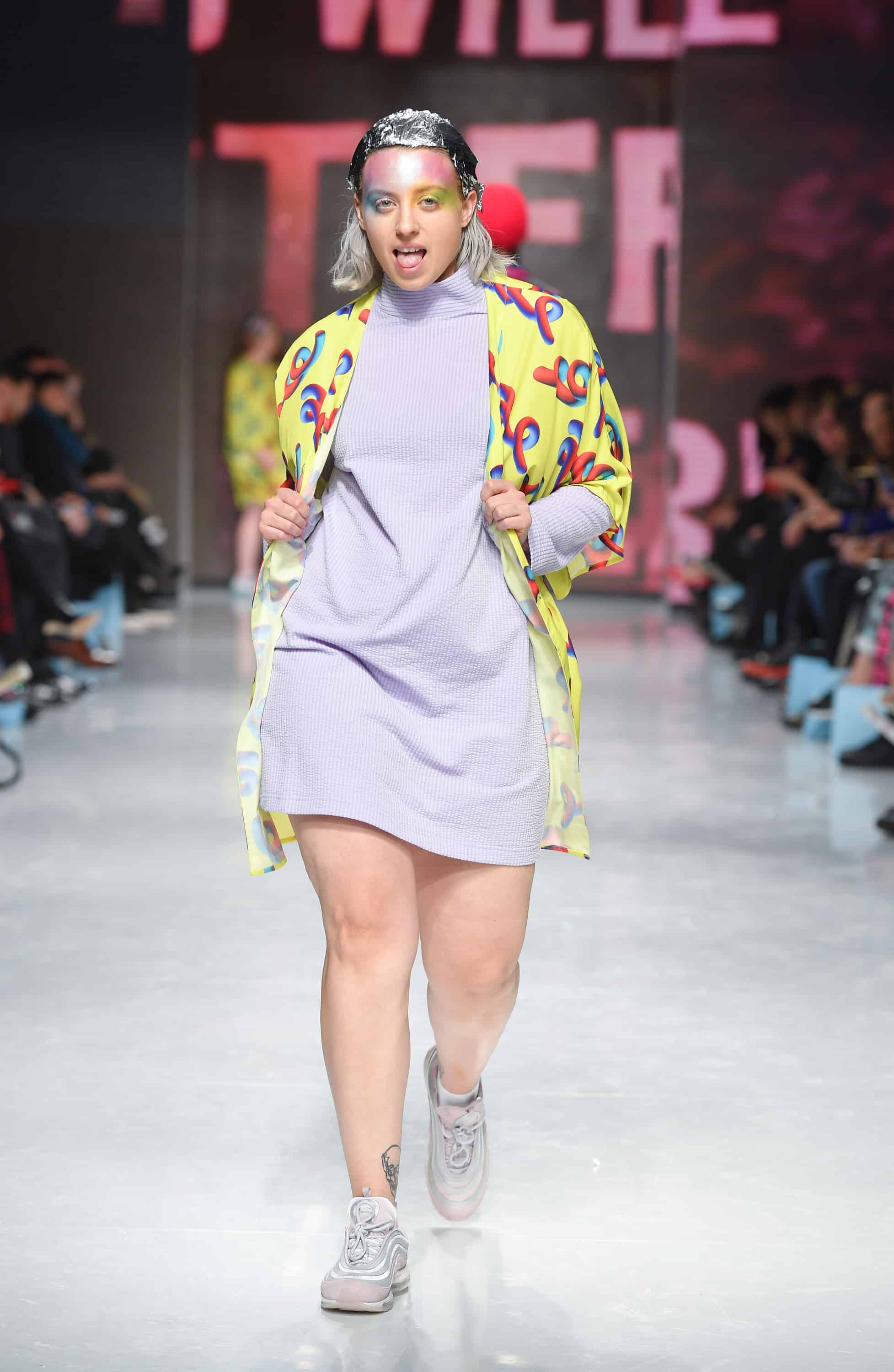 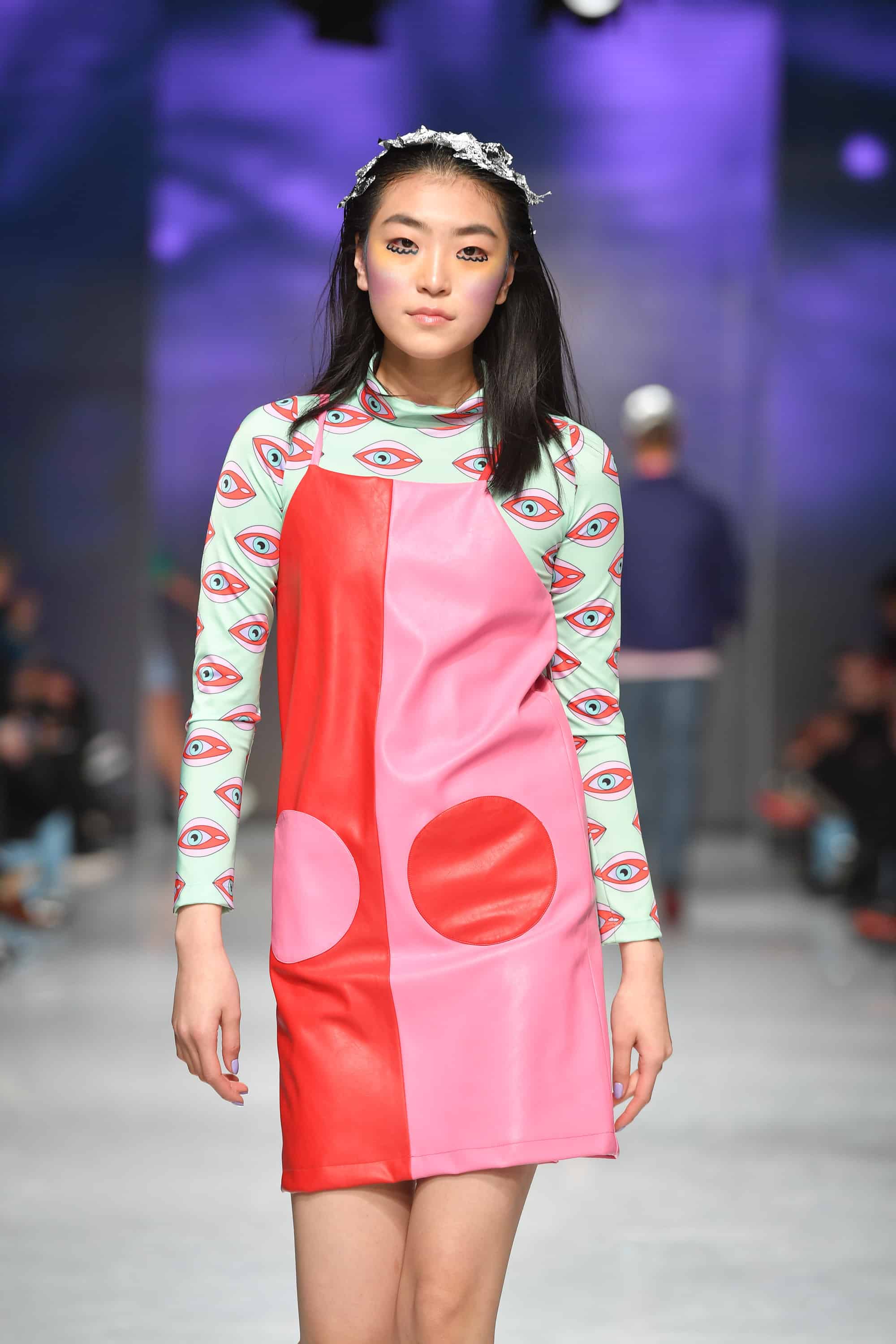 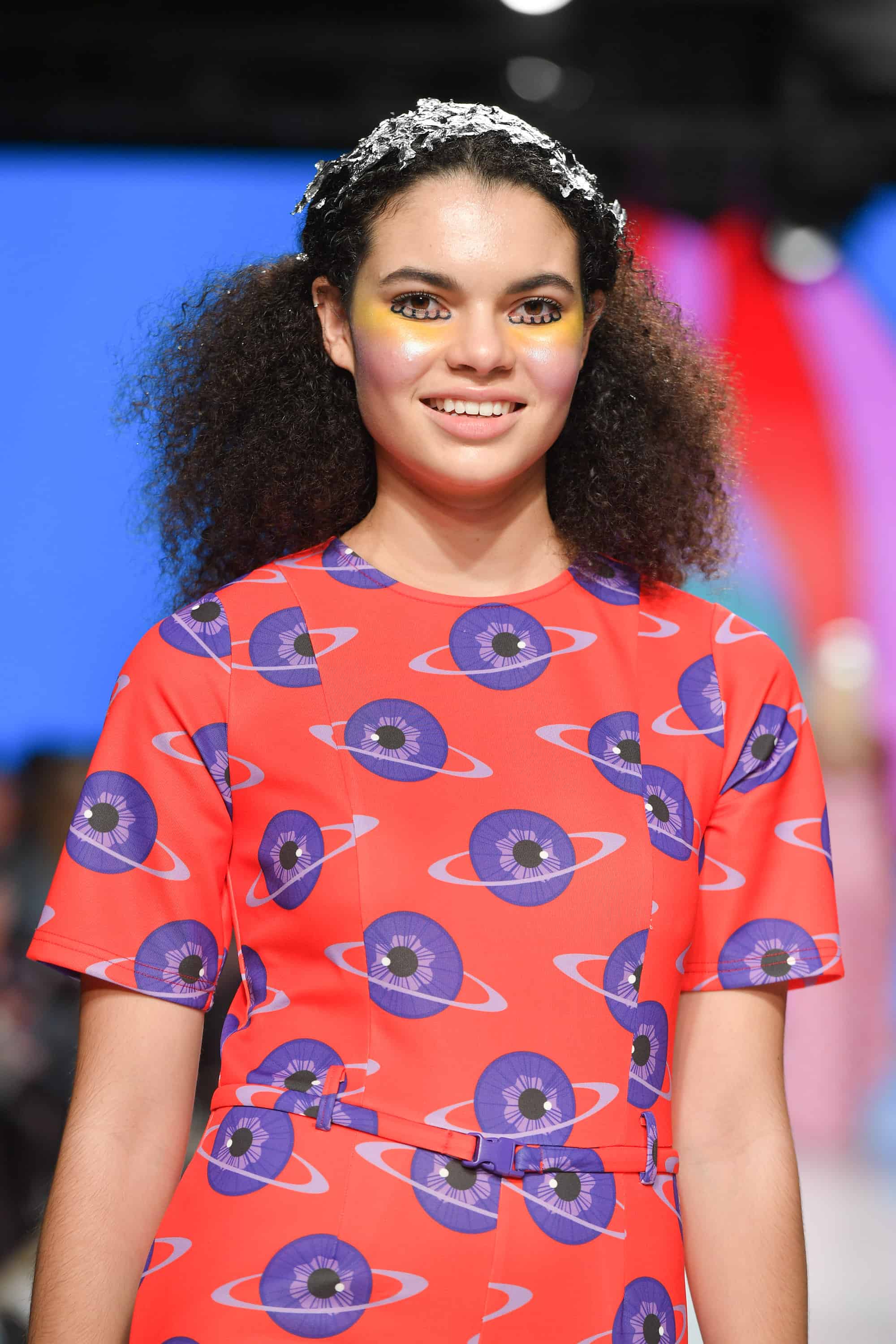 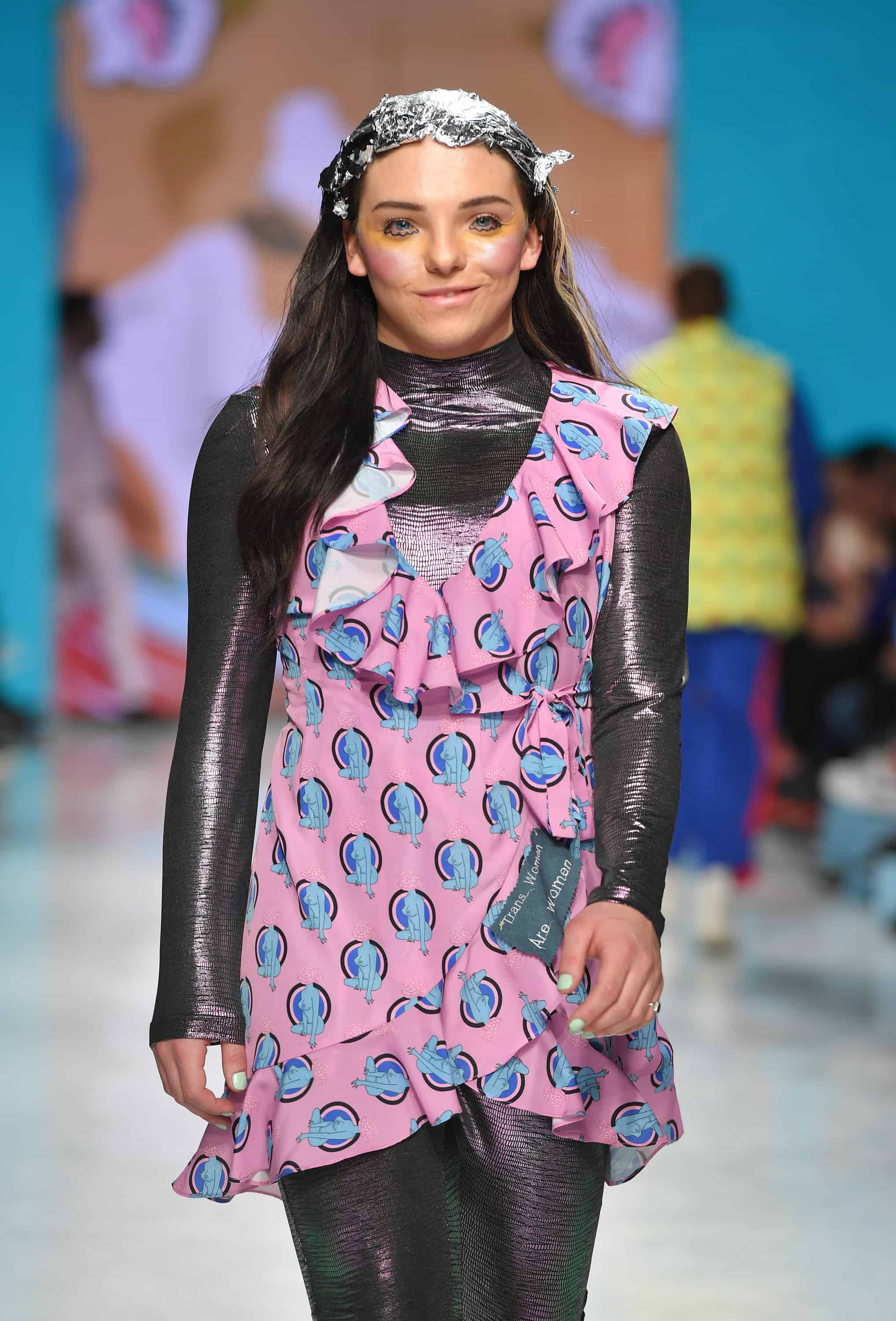 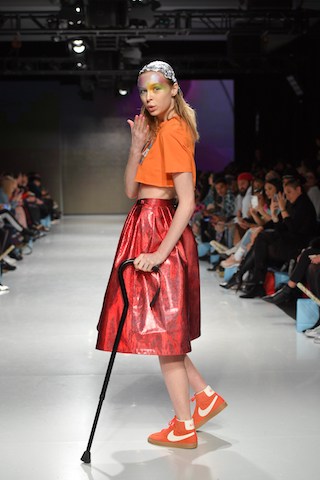 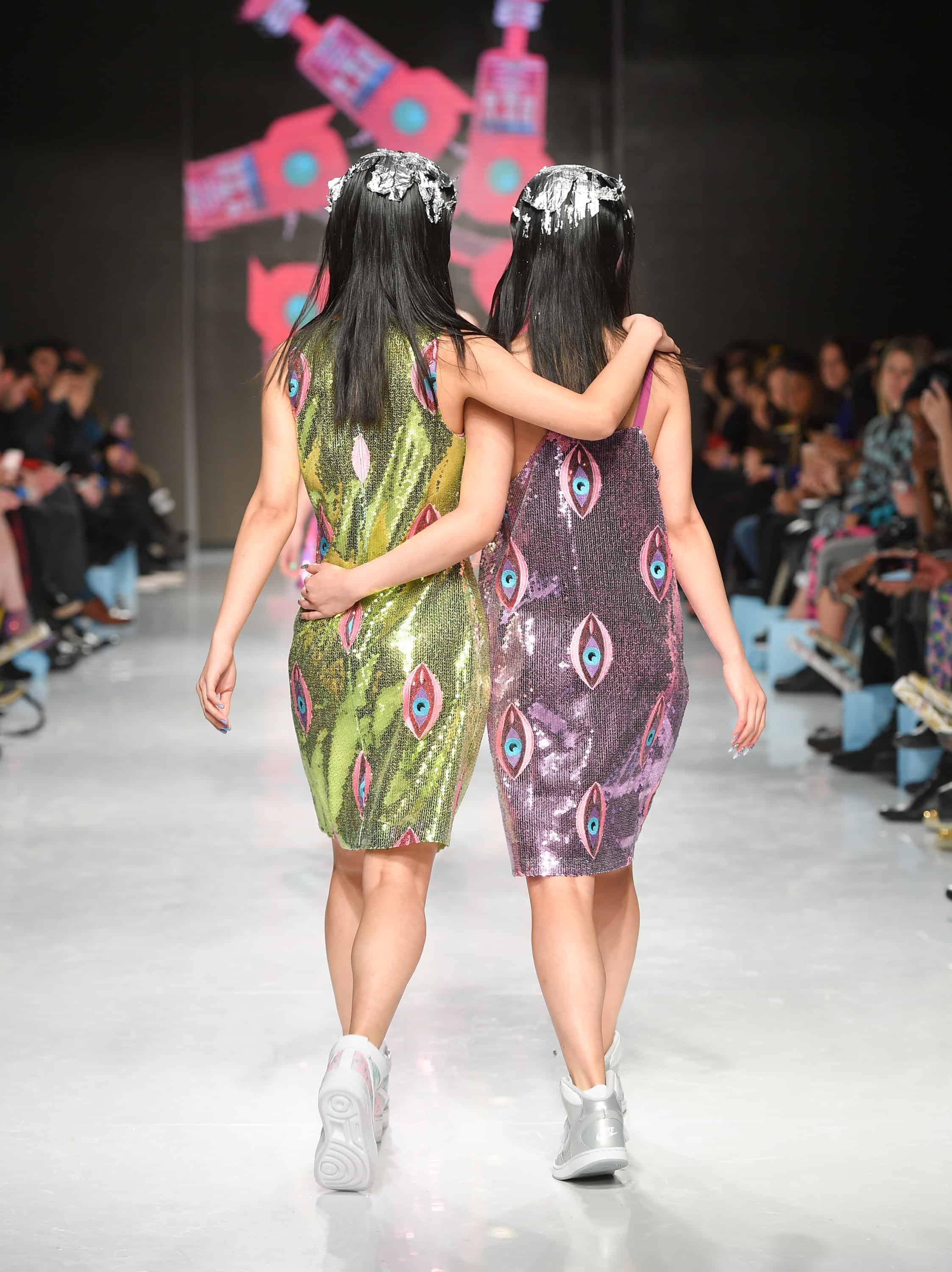 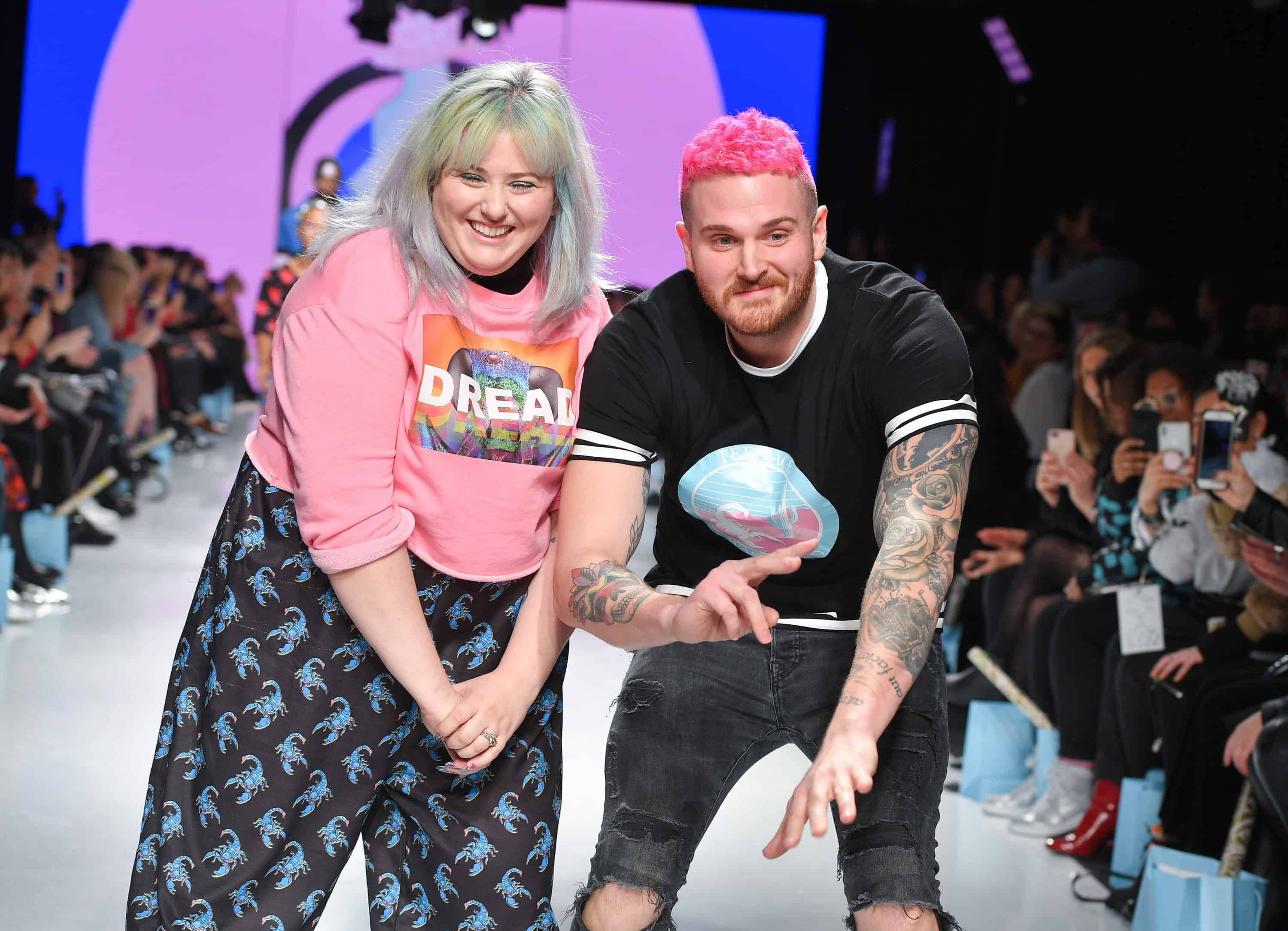