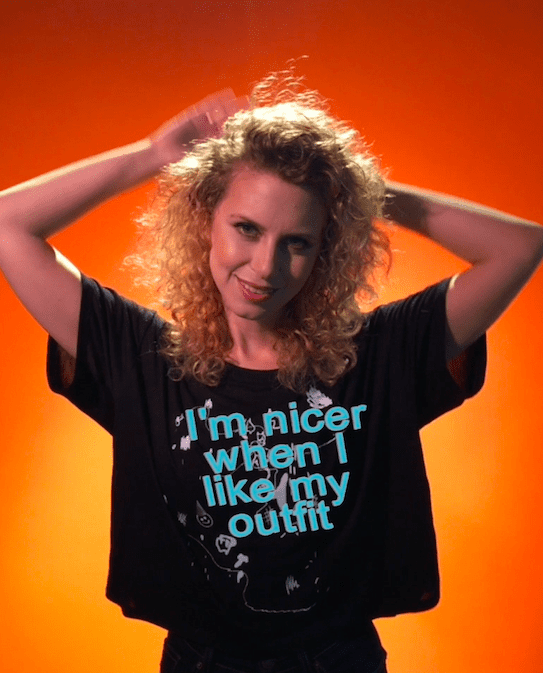 Remember Clashist? If not, you missed out. Clashist was an online apparel company that was *crazy* popular during its prime. Each piece had a unique and recognizable collaged aesthetic, making waves with both the Tumblr teenage girl crowd and celebrities alike. To refresh your memory, here’s a photo of James Franco wearing the Clashist James Franco shirt, another of Mindy Kaling wearing the Clashist Seth Rogen shirt, and another of Lena Dunham wearing the Clashist Sex and the City shirt. I never got around to ordering one myself, but I vividly remember pouring through their online shop time after time and wanting their Steve Zissou shirt more than I wanted to find true love.

Clashist was founded by creative guru Heather Lipner, but that part of her life is history. She’s moved on to bigger, better and more innovative things. And by bigger, better and more innovative things, I mean Drawsta. Drawsta is a wearables brand that mixes fashion, art and technology. Basically how it works is you buy a t-shirt from their online shop, download the free app, and open the camera/video feature in the app. The shirt contains augmented reality animations and when using the app, and animations will appear and move with the shirt. The animations for each shirt change weekly, and you can also now customize the shirt yourself — I did this for Vegan Girlfriend a few weeks ago here.

For a short-but-sweet period of time last year, I got *very* into wearable technology and augmented reality – obsessed, even — which is why I’m so into Drawsta. It all started while I was working a short contract position at MaRS Discovery District over the summer. For an article I was writing for the website, I attended Electric Runway – a wearables fashion show curated by Toronto-based tech writer Amanda Rebecca Cosco – and I was hooked. It led to me doing hours and hours for research, and I particularly became fascinated with 3D printed wearables. For those who are interested in geeking out, you can read my piece “Recycled Fibres Enable Limitless Creation in the 3D Printing World” here.

The topic still fascinates me, but has been less of a focus lately – until now. Amanda is actually the one who introduced me to Heather (welcome to the cruel small world that is my life). As a long-time appreciator of girl bosses as a greater collective, I thought that Heather would be an excellent addition to the interview series I’ve been doing for SDTC.

MS: Tell me about your inspiration to start Drawsta.

HL: I wanted to design and distribute in real time so as something happens in the world, people can artistically react and wear the animated graphic.

Why the switch from hyper-real prints (Clashist) to the digital extension of a simple print?

Fast fashion has been getting faster and with that, there’s a lot of waste. The idea with Drawsta is that there’s no physical waste by wearing digital culturally relevant graphics.

As the creator, what is your favourite part about Drawsta?

Being able to change what is on my shirt (as well as all of our audience’s shirts) in real time. We just uploaded a new multi-media animation to the server and it auto downloads on everyone’s device.

What demographic do you think Drawsta appeals to the most and why?

People in their early 20s who like Snapchat, are open to new technology, and like to wear new things often.

I love the stars being devoured by a black hole because it was representative of how NASA had just captured it for the first time and it also looks/feels pretty wonderful.

How will you adapt Drawsta to “keep up” with wearable technology, as its competitive industry advances?

Listen to what our audience wants – now it’s about animation requests, feature requests and growing with the audience demands.

Do you plan on extending Drawsta past an app? If so, how?

No immediate plans – the iPhone app is the best distribution platform right now and I imagine Apple will come out with Augmented Reality glasses so we’ll update the app to be compatible – that will be very cool.

What do you think is so appealing about Drawsta?

The ability to choose what is on your tee, customize what it says, and share it all in real time. It’s a very fun experience.

Drawsta has been described as your “brain child.” What are your hopes for the future of Drawsta?

Growing with the demand of Augmented Reality and reinventing how we think fashion should work.

Is there anything in particular that customers should know before buying the shirt/downloading the app?

It’s a ton of fun and a unique way to experience fashion.