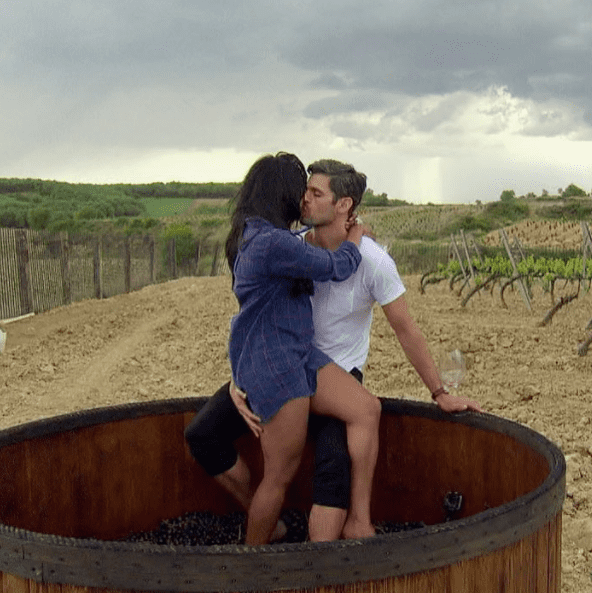 The Bachelorette Recap: Episode 9, Wherein We Debate The Meaning of The Word “Engaged”

This week we learned many things, one of which is that Rachel’s mother believes the entire Bachelorette franchise is a sham. Man, does that woman have an amazing use of side eye! However, we’re not there yet. Let’s start at the very beginning of the installment, when Peter met Rachel’s family.

Because Rachel’s sister Constance is eight months pregnant, the producers decided to introduce the brood of boys to her family now. You know, because if they wait any longer, Constance could be in labour, and ABC is way too prudish to show a woman crowning on their tentpole reality show.

Peter was the first young man to meet the Lindsays. Rachel wanted him to make a good impression, so she took her paramour shopping for a gift to bestow upon Constance’s unborn child. Rachel didn’t take any of the other men shopping, so are we to assume that Peter is the frontrunner? He did finally declare his love for our leading lady, but then he informed both Rachel and her family that he was not ready to propose.

Rachel was miffed at Peter’s perspective on proposals. According to her worldview, getting engaged is not necessarily a promise to get married. Now, as a scholar of The Bachelorette, I appreciate the show’s engagements do not always end in matrimony. At the same time, to enter an engagement believing it’s just a slightly more serious version of monogamy feels foolish. I agree with Peter that you ought not get engaged when you feel unsure about whether you want to get married. If you’ve yet to make up your mind about whether someone could be your life partner, it’s a waste of everyone’s time to put a ring on it. In my professional opinion as a former high school debate nerd, Peter won that argument.

The second suitor to meet the Lindsays was Eric. I thought Eric put in a good performance. He was affable, affectionate to Rachel, and came off as genuinely excited to meet her family. Rachel’s sister, however, took issue with the fact that Eric has never been in love before. Because apparently not having loved women in the past means he’ll love Rachel less or something? I’m not sure I followed Constance’s logic, but I’d overthink things too if my sister were considering marriage to a guy she met on reality TV. I get you, Constance!

The last guy to meet the family was Bryan, who put in a…poor performance. As a former teacher, I am pretty good at grading things, and he definitely gets a D, if he’s lucky. Bryan went in claiming to be madly in love with Rachel, but creepily declared his mother will “always be the number one woman” in his life. It was all very Oedipal. Bryan needs to see a Freudian psychologist, STAT. Those are some epic mommy issues. He did not do himself any favours with Rachel’s family by suggesting Rachel will always play second fiddle to his mom.

For her part, Rachel’s mother was the voice of reason for this episode, and probably for the entire season. She declared that it is not, in fact, possible to fall in love after two months of televised courtship. This seemed to upset Rachel, which I get; she’s just invested a large chunk of time into an experience about which her mother is skeptical. At the same time, Mama Lindsay makes a very valid argument about the improbability of making it work with someone you met as part of your harem of travelling men. Rachel’s mom spilled the tea before it was even time for dessert!

After everyone met Rachel’s highly skeptical family, she and the boys departed for sunny Spain to enjoy Fantasy Suites Week! In case you aren’t familiar, The Fantasy Suite is basically the Super Bowl, but for sex. The way it works is Rachel takes turns going on a one-on-one date with each guy. At the end of dinner, if they’re feeling it, they can sneak off to a special sex den provided by the show. The Fantasy Suite provides the titular bachelorette and her suitors with off-camera alone time where they can “talk in private,” but obviously we the viewers hope they’re just boning.

The first gentleman to get The Fantasy Suite treatment was Eric. Over dinner, he reminisced about his and Rachel’s greatest hits. Foremost in his mind was the time they enjoyed a soak in a hot tub together. When Rachel asked why that memory stood out, Eric insisted it was because of the great “eye contact” they enjoyed in the Jacuzzi. Needless to say, all of North America fell out of their chairs laughing. I love Eric, but no straight dude in the history of the world has ever enjoyed a dip in a hot tub with his bikini-clad girlfriend because her “eyes” were killing it that day.

The second fella to go on a Fantasy Suite date was Peter. He and Rachel went to a vineyard, where they crushed grapes with their feet. While doing so, they made out a lot and it was hot. In fact, it felt soft-core porn-adjacent. I wouldn’t have wanted to watch that scene with my mom, is all I’m saying.

There may be trouble in paradise for Peter and Rachel, however, because the episode ended on a cliffhanger: Peter and our girl are still in disagreement about the definition of the word “engaged.” Rachel is determined to be proposed to on the season finale, but Peter continues to insist he isn’t prepared to propose. These two impossibly pretty people are at an impasse. But that’s okay, because Peter is totally going to be the next Bachelor anyway.

Until next week, dear readers! Now please excuse me while I re-watch that scene of Peter and Rachel erotically crushing grapes on loop for the rest of the day.