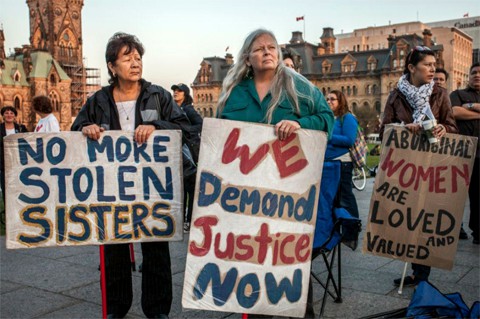 This week, the body of Loretta Saunders, a 26-year-old Innuk student at St. Mary’s University in Halifax whose thesis focused on missing and murdered aboriginal women, was found near a New Brunswick highway. Her roommates are in custody and it is expected that they will face murder charges. Her thesis advisor, Darryl Leroux, has written a tribute to his student on Halifax Media Co-op.

What happened to Saunders fits in to a too-often-neglected narrative surrounding the disappearance and death of indigenous women in Canada. A fact sheet from the Native Women’s Association of Canada provides an important picture of the over 582 cases of missing women the association has gathered. Nearly half of these cases remain unsolved.

How can you help? Consider supporting some of these organizations, just four of many doing good work to help stop violence against women:

No More Stolen Sisters: Amnesty International Canada
A good factual overview of the systemic and societal problems contributing to violence with links to organizations.

Justice for Missing & Murdered Indigenous Women
Location: Montreal
Mandate: “Missing Justice is deeply action-based. Our goals are to raise public awareness and create a safer environment for Indigenous women by tackling issues of systemic racism, sexism, classism and negligence that are present in the media, the justice system and police forces. ”