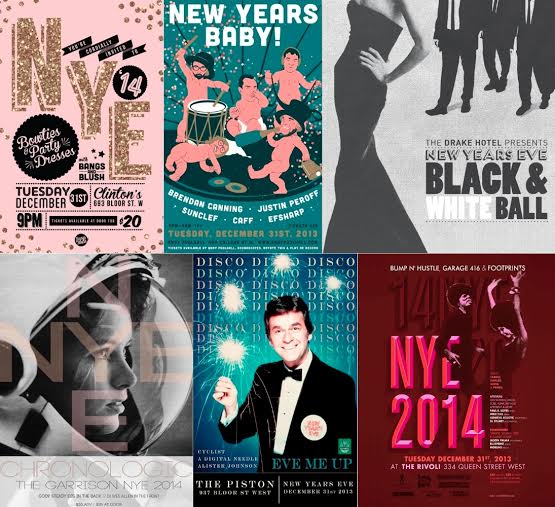 From carnivals to beach parties, and a castle soirée – we’ve got 31 different ways for you to bid farewell to 2013!

8 pm NYE Black & White Ball @ The Drake Hotel, 1150 Queen St. W. Channel Frank Sinatra and Audrey Hepburn or just use your favourite monochromatic Instagram filter all night at the Drake’s building-wide Black & White Ball! Whether you want to say farewell to 2013 with a sumptuous feast or take your glam outfit for a twirl on the dance floor, NYE at Drake has got your ticket. (For dinner reservations, email specialevents@thedrakehotel.ca or call (416) 531-5042 ext.1.) $23.05-$100.22 advance tickets available online.

9 pm The Dude’s New Year’s: The Big Lebowski @ Bloor Hot Docs Cinema, 506 Bloor St. W. Last year, a sold-out crowd of “Little Achievers” joined Bloor Hot Docs to ring in the New Year with bevvies, bowling, and a raucous screeing of The Big Lebowski. The Dude, Walter, Donny and the gang are back for another round of White Russians, Creedence, and unforgettable hijinks. This may be the only New Year’s party where wearing a bathroom and sunglasses is encouraged! $20 tickets (includes screening, one drink, popcorn, and party favours) available through Bloor Hot Docs.

9 pm Eve Me Up: A Disco NYE @ The Piston, 937 Bloor St. W. Funky, soulful, and boogie-laden disco tunes brought to you by A Digital Needle, Cyclist, and Alister Johnson. Complimentary Steamwhistle toast at the groove of that midnight rhythm (that’s when things will really come alive)! $10 limited advance tickets available online. $15 at the door.

9 pm Bangs & Blush Present: Bowties & Party Dresses @ Clinton’s, 693 Bloor St. W. Bangs & Blush play all your favourite party songs from the ’50s to now! LADIES: sport your sparkliest party dresses; and GENTS: class it up with a suit and/or bow-tie. Advance tickets sold out but there will be more $20 tickets available at the door.

9 pm Rule Breakers’ NYE @ Souz Dal, 612 College St. No cover. No champagne. No hype. Bring your own vinyl and hear the music YOU want to hear as you enter the New Year! Midnight shots brought to you by Luksosawa Vodka and Jameson Irish Whiskey.

9 pm Prohibition: NYE 2014 @ 559 College, 559 College St. Slip into your most dapper 1920s threads and prepare for a night of Prohibition Era decadence. The bar will be transformed into a vintage-style speakeasy emporium taking you back to the 1920s as you sip on Manhattans and Sidecars, nibble on delicious canapés amidst tap and Charleston dancers, gambling tables, and silent movie screenings. Though, it wouldn’t be anything without a fabulously dressed crowd – think flapper dresses, feathered headbands, tuxedos, top hats, and spats. $25 advance tickets (includes a classic cocktail upon arrival and champagne at midnight) available by emailing play@559college.com or calling (416) 640-5536.

10 pm Chronologic New Year’s Eve @ The Garrison, 1197 Dundas St. W. Ring in the New Year with a dance party through the ages! The Goin’ Steady DJs play the absolute best dance tracks from every era – unexpect the accepted except exceptional exceptions and DANCE. Pop and antipop from 1890 to 2014, played in chronological order. DJ Wes Allen holds down the front room, all night, into the future. $20 advance tickets available at Rotate This, Soundscapes, and online; $25 at the door.

10 pm P&L NYE ’14 @ Parts & Labour, 1566 Queen St. W. Kick off the party with White Girl in the Shop (rap music from 2001-now with DJs Patrick McGuire and ItsMattLangille) then move upstairs beginning at 11:30 pm for DJ sets by Josh Mcintyre and Josh Voynovich. $15 for both floors (or free with dinner if you feel so inclined).

10 pm CrushTO NYE @ Club 120, 120 Church St. Get ready for a night of glitter and glam at I’d Tap That’s first New Year’s Eve Bash! #CrushTO is a flirty event series for hot, nerdy people who want to make sex-positive like-minded friends. An invitation for any and all: hetero, homo, queer, trans, kinky, lesbian, gay, vanilla, bi, flexible, poly, and open-minded young people (or young at heart). Featuring burlesque and drag shows + private consent-monitored booths to get hot and heavy in. Dress code: silver and white. $10 at the door ($15 gets you a glass of champagne at midnight).

10 pm New Year’s Eve with DJ Lazarus @ Velvet Underground, 510 Queen St. W. Celebrate the end of 2013 and the start of a new year with the best soundtrack possible! DJ Lazarus plays classic alternative, retro, EBM, synthpop, minimal wave, post-punk, and your requests until 5 am. $15 advance tickets available at Velvet Underground and (soon-to-be) online; $20 at the door.