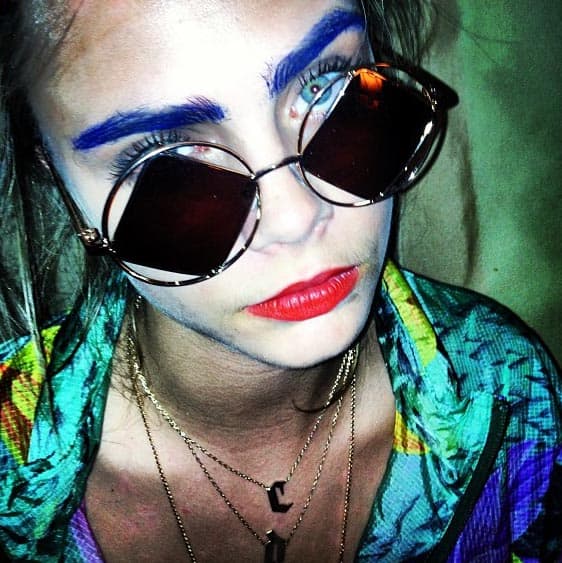 Something Is Happening With Eyebrows

When it comes to beauty, I’m somewhat like an easily-distracted third grader. (When it comes to a lot of things, I’m somewhat like an easily-distracted third grader.) I’ll do the activity, as long as something more interesting doesn’t come along. I can remember to paint my nails, but only when I have to spend an extra three minutes in line for something and notice how chipped they are while manically scrolling through Twitter on my phone. I only remember to trim my bangs when I can’t see, or when my boyfriend makes an appointment to see our mutual hairdresser and I can piggyback a ten minute touch up. I’m not opposed to grooming, I like beauty stuff when I can get it, I just have a tendency to forget.

So, like when tall, bald, bespectacled Mr. Sparry called everyone to the carpet to teach us some sort of witchery like “maths” but I was so engrossed in the book I was reading I just stayed at my desk, I recently had a moment of “Is there somewhere I’m supposed to be” regarding my eyebrows.

Brows, in case you haven’t noticed, are A Thing right now, mostly thanks to ladies like Cara Delevingne and Grimes, very beautiful women with very pronounced eyeball-framers. Strong brows are gaining prominence, so I shouldn’t have been surprised when a bunch of my friends started excitedly bonding over their use of eyebrow-darkening pencils and powders. Brow grooming, it seems, has transcended my usual appointment of tweezing in the bathroom once I’ve watched so much Netflix my feet are asleep and I’m getting on a train tomorrow to see my boyfriend. Then, SDTC Boss Jen McNeely posted a foxy-as-usual picture on Twitter of herself with “new brows.” New brows? Waxed? Threaded? Nope, dyed. WHAT DOES IT ALL MEAN?

According to different schools of thought, eyebrows mean a lot. Chinese face reading says that the shape and size of your brows can predict everything from the number of siblings you have to how detail oriented you are. Sometimes, a brow can indicate status. Pre-modern Japanese aristocrats would remove their natural eyebrows and draw in new ones using soot (some guess this was done to ease the application of white face makeup). According to How Stuff Works, it makes sense that we worry about our eyebrows so much: They’re one of the most expressive of our facial features. As the Clone High episode tells us, they’re so important to our emoting abilities that celebrities don’t even have them. They’re added in post-.

In evolutionary terms, brows do more than indicate emotion:  we have them to keep sweat and rain out of our eyes (those aristocratic ladies probably weren’t sweating too much). While we obviously spend a lot of time thinking about our own (and unwittingly expressing those thoughts by how we move them), how much do they matter to the people around us? I asked some friends, and it was suggested that a man’s brows matters a lot less to his overall attractiveness than a woman’s, although the grooming industry hardly ignores men’s desire to tame dem tings. But perhaps my friend Rudy put it best. When I asked him how much eyebrows meant to a person’s overall appearance, he responded, “Not nearly as much as a person’s high brow.”