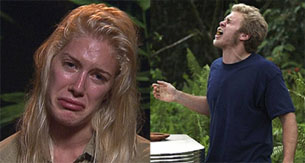 Instead of doing something or anything real lately, I’ve found myself sucked into YouTube clips of the newest and lowest “reality” show that isn’t anybody plus eight: I’m a Celebrity: Get me Out of Here! The highlight of NBC’s stupidest summer filler is something called Speidi: her a makeup-less (aah!) crybaby and him the blondest douchebag since Billy Idol. Since “super-celebrities don’t belong in the jungle,” however, Speidi quit on the first day, returned on the second, re-quit on the third, etc. Says some other non-Baldwin: “Waking up without Heidi and Spencer was like waking up to a rainbow,” which got me thinking: What would the world be like without Speidi?

Firstly, there won’t be any drama on The Hills (SDTC twitterers will stare sad-faced into their Blackberrys), and passive aggressive bitches everywhere will be forced to gossip about each other. With no Hills, the world’s second-biggest d-bag Doug Reinhardt will have no legitimate claim to fame or Paris Hilton’s thighs. Without his hunky distracting presence, Paris would never have dumped her gross Boy George of a boyfriend Benji Madden, and they’d marry as promised on Letterman after eight months of surety.

Hold on to your LC jersey knits, girls, cause Paris Madden is now the half-sister of Nicole Richie, and ripe for The Simple Life: Sis’ ‘Dis. Still riding her last coattail to tv fame, Nicole won’t need to pretend she’s square now and will instead be the round heroin-flavoured disaster we knew and loved. Now no longer the fattest girl in LA, Jessica Simpson’s deep-rooted self esteem issues won’t terrify away John Mayer, who’d skip the swimsuit ordeal (what nightmares are made of) and the awkward Jennifer Aniston hookup.

Our saddest Friend, now not repeatedly humiliated by her small-bulged emo twitterer, won’t need to make He’s Just Not That Into You in a desperate attempt to prove that men are into her in real life. They’re not. Aniston’s replaced with blank slate Kate Hudson, who’ll learn her own lesson and decide she’s not that into A-Rod, who’ll cry from the estrogen and crawl back into bed with Madonna.

Now too busy shagging on Primobolan to kidnap African orphans, Madonna will personally veto the international adoption trend. Brangelina makes only boring white babies, and no one cares if they went to the park this weekend or not. Now Brad and Angie can marry normally like you know they want to: for love and schadenfreude. Since Brangelina’s doing it, marriage is totally in this season, and Prop 8 passes with the same logic that made Mr. and Mrs. Smith a $478 million success. Adam Lambert marries his boyfriend, but admits nothing.

Gay marriage now legal, Perez Hilton asks Carrie Prejean about her new President, John McCain, who without the tanned thumbs-up from Speidi herself, retained just enough dignity to steal the election. Prejean doesn’t mention the Iraqs, and wins by a landslide. No one watches, and I have nothing to write about that isn’t hypothetical. So God bless you Speidi, for keeping me real for just another day.