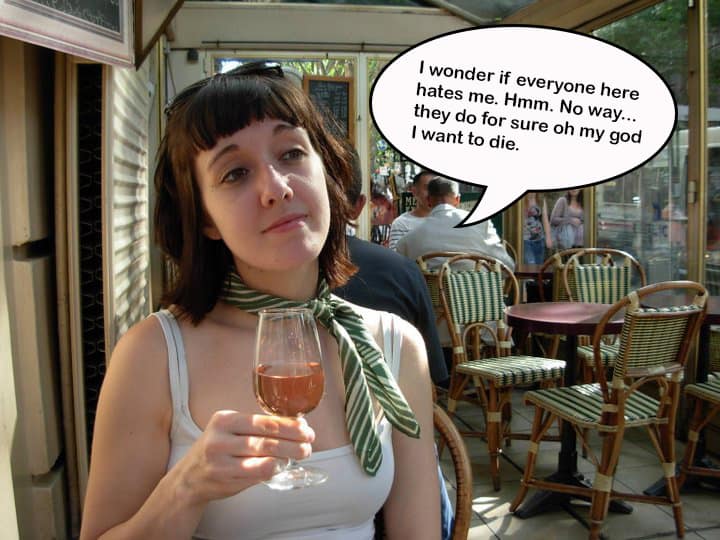 My Struggle With Taking Things Personally

“Don’t take it personally, Jess. Why are you upset? We’re only trying to help.”

Also, I was born in early July and with that came the astrological sign of Cancer and with that came lifelong, unceasing, overwhelming emotional turbulence/public washroom heave-crying at every corner. Specifically in response to perceived judgement/dislike/not-interested-in-smooching-the-face of me from others.

I am a paranoid individual and when I say “paranoid” I mean I convince myself that everyone in every coffee shop knows my name/what I do/sees my outfit and despises all of it with vehement rage. This could be interpreted by some as a form of delusion. Far beyond the reaches of mere false perception. But I like to call it ‘“Jess being Jess!” (my therapist likes to call it “let’s work through this together” and my mom likes to call it “Do you have diarrhea again? You look panicked”).

The concern that I am being watched and analyzed oscillates in intensity between quick passing thoughts and full-on conspiracy theory developments. Some of my conspiracy theories include: Friends organizing birthday soirees in secret Facebook events in an attempt to avoid my presence, bosses being aware that I spend most of my work hours not being productive and making a record of how many times I re-blog photos of a dolphin instead of making spreadsheets, and sexist dudes coming to my comedy shows in hordes to heckle me away from my career (the last one is less of a theory and more of a lived nightmare). Roughly 37 more involve strangers on the TTC hating my natural scent and my roommates taking revenge on me by consuming the last of my mayonnaise.

Why do I have such a collection of unnecessarily detailed conspiracy theories? Well, that’s a heated question with several heated answers:

1) I mega care what people think of me

2) I take everything way too personally

Now, both of these nuisances, the caring and the personalizing, have become less nuisance-y over the years. As my confidence has grown and my giving a shit about idiots has lessened, so has the worry that people I barely call acquaintances have negative perceptions of me. What still remains is my anxiousness regarding the opinions I am most preoccupied with and hold in the highest esteem, which are those of my friends and colleagues. I conspiracy theorize the ones closest to me more than anyone else, because their opinions actually matter to moi. And if a feeling is ever shared with me that isn’t a construction of my “think the worst always” mind, if it is a legitimate criticism, that usually results in me crawling into a ball in the corner of my room and sobbing into and around a box of wine/crackers/donuts.

People will comment and rip apart and go on tirades about anything and everything, and again these are frequently total strangers. But individuals I actually know have done the same in the past. Either told me in person, or via text, or left their thoughts on a piece I’ve written in the comment section on Facebook (including a mix of compliments, passive-aggressiveness, or “I disagree with all of it forever YOU’RE WRONG FOREVER OKAY BE RIGHT ALREADY”).

Whenever I find my feet guiding me towards the Wine Rack and the Metro and the vegan bakery at Lansdowne and Bloor, I say to myself “Jess, you are incredible. You are truly incredible. And they are insane/incorrect/partly correct but give yourself time to digest before collapsing into sadness/accepting their evaluation as truth/throwing it in the garbage and setting said garbage on fire”. I follow this up with: “But still,  get the wine and the crackers and the donuts ‘cause that sounds like a good time.”

Self-love is key to your soul not being personally bruised by others on the regular. When I shove the alcohol and sugar and salt into my mouth in a celebratory manner it’s definitely less of a shame-fest and more of a “I’m the best and I deserve a feast”-fest, which is my favourite kind of fest. And even more than self-love, knowing what to take seriously and what to disregard makes a huge difference. If it’s nonsense, into the burning garbage you go. If it’s got some merit, have an open ear but only open it up to the point that you are still comfortable and not feeling attacked.

When a person lashes out, either towards your work or at your personality or in response to an action you took in relation to them, it typically has more to do with them than you. This ain’t always the case, sometimes people say things with some veracity that should be contemplated by your brain. And sometimes they don’t. Sometimes a dude had a fight with his girlfriend and him ranting about how my piece about relationships is THE WORST is him dealing with his shit and has nothing to do with me. Or someone saying that me openly discussing my period is THE GROSSEST THING THEY HAVE EVER HEARD AND THEY NEED TO VOMIT NOW IN RESPONSE has more to do with their own issues with their own body, for sure. Or a friend claiming I AM LAZY because they feel they’re lazy. Or a family member demanding I get a “stable”, “good”, “respected”, “not embarrassing our heritage” job is really their concern about me going hungry, losing shelter and worrying about my safety.

Basically, they’re saying they hate me ‘cause they love me.

What’s interesting is that as the amount of real or perceived judgement tossed in my direction increases, its’ effect on me (and my sensitivity to it) decreases. The more it happens, the less you feel it, although as it builds it does get worse until it gets better. I found there was a moment where I was about to lose my mind, either in a relationship, or in a friendship, or in regards to my creative work, and then that “losing my mind” sensation began to dissipate.

To clarify, I’m not accepting terrible treatment from others. If a relationship is toxic and I am dealing with constant negativity and criticisms I will get the hell out of there before you can say box-wine-cracker-donut. I’m referring to those who are honestly trying to help and don’t mean harm against me, or those who do but are nobodies and simply not an opinion I ever take seriously. All I’m saying is it gets easier as you age, and mature, and learn to recognize the glory that is you – and more importantly learn how not to let what’s happening around you shake that glory, while at the same time hearing the truth from those who love you.