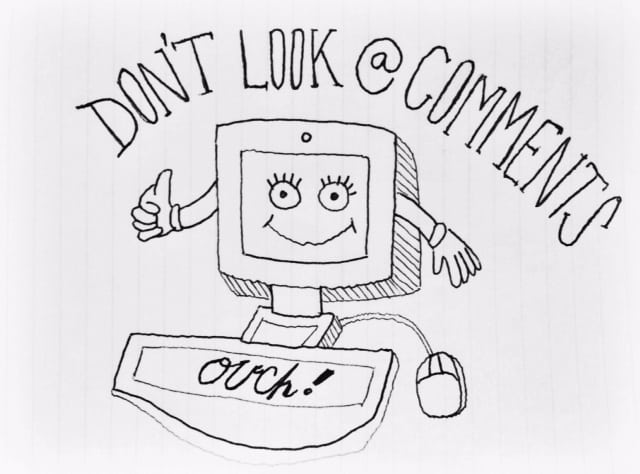 STUFF ON THE INTERNET: HOW TO DEAL WITH NEGATIVE COMMENTS

I am a writer on the Internet. My name is @drakecereal. There is a full-grown woman attached to that handle who lives on West Queen West and microwaves coffee after dark. Stuff on the Internet is an introspective series, how-to manual and news update that I’ve written to help women like me, who need non-solicited help online. Lord knows, there isn’t a Dummy’s guide to saving us from the awkward, terrifying, hysterical moments that make the Internet feel way too IRL. Read if you like, LOL and share honest comments as I cry to the Internet gods and weep for the sake of humanity.

Last April, I wrote an article called, “Top 10 Things That Women in Toronto Say but Don’t Mean” for She Does The City. During that time, I relied heavily on top ten lists to help me advance my career as a writer. I abused this template until I felt clever enough to write short stories and essays I felt proud to share online. For three consecutive months, top ten lists were my crutch: they performed well and spread my tail feathers as an amateur Internet writer.

But then something peculiar happened.

I was in the middle of writing another top ten list when an email suddenly appeared. It was from a woman I had never met before and addressed directly to me. She read my “Top 10 Things That Women in Toronto Say but Don’t Mean” and was enraged about a comment I made about declaring bankruptcy. I was horrified and promptly defensive: IT’S NOT MY FAULT LADY! Oh wait, it was. Those words were mine, and rather foolishly, I had written something ignorant without thinking. But, wait, I’m not a mean person. Ugh. I’m such an idiot. But still, I was joking. Surely she missed my sarcastic tone. I devised responses to prove my innocence in the matter. I fell short of words.

Instead of responding, I re-read the piece and empathized with her. She was hurt and offended by my crass comment that “nobody is broke.” It was insensitive, and while it didn’t occur to me that someone might be terribly outraged by such a joke, I hadn’t considered this whatsoever. After a week or two of loathing in shame, I deleted her email and forgot about it entirely. I felt embarrassed and knew that there was nothing to say to amend my actions. Sorry felt outdated; forgetting was easy. I figured this stuff happens all the time to writers on the Internet; it was just my turn. That’s all.

Up until that point, I didn’t think my opinion mattered much. I was a no-name writer still figuring out my voice in the world. I mean, how many people could possibly read my writing and care? Not many, I thought. But then my article went sort of viral and overnight, hundreds of people had read it. I suddenly felt important; like a glamorous somebody with something glamorous to say. It was electric. And even then, I felt like a criminal for saying such horrible things on the world wide web. I was a phony.

I’ll admit right now that I’m not proud of everything I’ve written online. I’ve got to make a living, and there are going to be times when I write things that I don’t want to share on my LinkedIn (“17 Ways to Hold Back a Fart in Yoga Class” or “69 ways to give a blowjob with your eyes closed” etc.). Chances are, readers are going to disagree with things I say. The Internet is a conversation after all. The way I see it, the writer is the big red target, and the comment thread is the shooting range. Not everyone will comment, but some will. And for the writer, the comments are the encore to the concert – we know it’s coming. And that’s the yay, scary, fuck, ugh, wow, crazy part about writing online. We crave feedback from our peers, but only the encouraging ones. It’s hit-or-miss, and we’re darting bullets like our future online prosperity depends on it. Writers aren’t made of steel, you know. We’re made of gooey fluff, dark stains, coffee spills and glitter.

Don’t get me wrong. Positive comments exist – alongside unicorns, rainbows and funny cat videos on YouTube. But a person with a negative comment is 99% more likely to comment than a person who found my writing to be amusing or relatable (I made that stat up btw). If a comment thread forms, the avalanche hits, and readers are itching to jump into the forest fire of smoke and screams. It’s here, under the anonymous territory of threads, that faceless users battle to the death in battle. It’s raw and unfiltered, and spectators can’t help but join in the gang mentality. It’s hilarious, amusing and heart-wrenching. Not to mention, websites guarantee more traffic when there’s a blood trail in the comment thread. It’s human nature to gawk over stuff like this.

But who’s right and who’s wrong anyway? Nobody. That’s who. The winner of the comment thread isn’t awarded a Noble Peace Prize, free pizza or tickets to The Nutcracker. It’s a never-ending brawl of users that will continue to comment, until one day the article gets buried in the search engine graveyard of old and outdated Internet things. Until then, new audiences will watch in curiosity, disgust and admiration. Because if there’s one thing we can all agree on, it’s that comments are compellingly real. They’ve got spelling mistakes, missing commas, no capital letters and profile pictures with occupations in them; they’re unforgivingly human. We can’t help but take comments to heart.

I guess it’s flattering as a writer to have caused such a rumble — it may be the purpose of writing. But at what cost? If negative comment threads spin out of control, it’s only a matter of time until angry trolls take things to the next level; a personal attack on the writer. She’s the one who started this argument after all. It only seems right to turn the argument back to her and make her feel stupid. That’s why we love the Internet: we can hate and love to such extremes with anonymity. It’s a beautiful incoherent mess of opinions and identities we curate. Love it or hate it, the Internet is an obscene circus with orders, rules, and etiquette. An ecosystem of crazy, insane, beautiful people.

That said, as a writer, we repeatedly remind ourselves: Don’t look at the comments. My brother often warns me, “Sarah, you have no shame,” and I agree – I don’t. Great writers don’t give a flying fuck, therefore I couldn’t possibly let shame step in the way of my brilliance. Even for respected writers and academics, the rule stands tall. Don’t look. But then we peak out of curiosity, because we are masochists; we humiliate ourselves in a personal way that’s self-deprecating and honest. The comments exist to tease us. They live beneath our words in a separate entity.

We’re curious, sensitive and intrigued to see how the world outside will react to our thoughts, opinions and cry for justice. We put ourselves out there after all; we deserve to feel the pain and humiliation of strangers. The dirty looks, empathy, fear and disgust in the comment thread. We thrive on it.

And that counts for everyone. Whether you’re a smoking hot chef, pretty little liar, vegan Instagram celebrity, mom blogger, starving student, swimwear model — we’re all hyper-aware of the way our content resonates and interacts with friends, family, and strangers. It comes with the territory of Internet stuff: that moment before we hit the publish or send button – when the world decides to fucking love it, set it on fire, or worse, totally ignore it. Welcome to the wacky, scary, obsessive-compulsive, shiny, depressing world of the Internet.