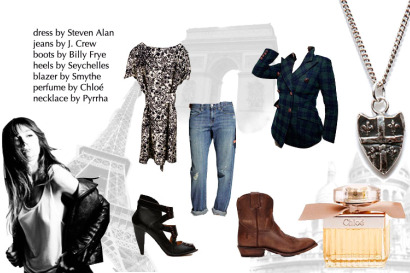 When it comes to genetics, Charlotte Gainsbourg hit the jackpot.

With parents like French pop legend Serge Gainsbourg and British actress Jane Birkin , it’s no surprise that Charlotte has been in the public eye since she was born.

The French chanteuse has been acting since 1984, and made her controversial music debut the same year. Lemon Incest, the song and music video that introduced her to the biz, featured a 12-year-old Charlotte in a button-up chemise and panties on a bed with her shirtless father. Most people didn’t quite “get” the Lolita feel of the video and the provocative lyrics. The video sparked huge controversy, but it was a learning experience to fuel her music career, which didn’t take off until 20 years later.

Since then Charlotte grew up to establish a fine career in music and acting. She’s starred in countless French and American films, notably Lars Von Trier’s Antichrist and her bombshell appearance vis-a-vis Cate Blanchett in the Bob Dylan biopic I’m Not There, and has released three albums.

The concept of her latest album came to her after recovering from a near-death waterskiing accident in Hawaii in the summer of 2007. The mechanical rhythm of the many MRI’s used in treating her cerebral hemorrhage was soon translated into her latest musical endevour. Produced by Beck, IRM (the French acronym for MRI) was released in late 2009, a follow up to the critically acclaimed 5:55 from 2006.

Aside from being a chanteuse and an actress, Charlotte Gainsbourg has become an accidental style icon. Her mandate of not trying is exactly what caused this. Her well-worn signature cowboy boots tucked under jeans, delicate blouses and well-tailored blazers offer a European elegance as well as a delicate femininity through simplicity. The pieces we chose represent this; the Steven Alan dress and Seychelles shoes recall the ones she wore to the premiere of Antichrist at Cannes Film Festival, and the rest to convey her effortlessly constructed aesthetic.