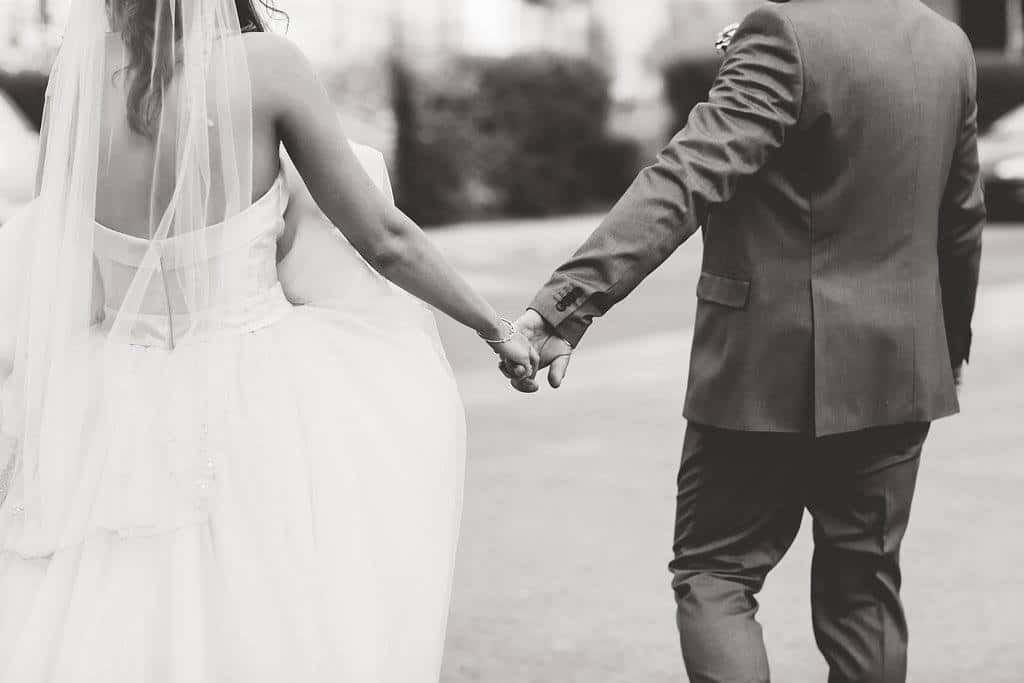 The Feminist Wedding Diaries: Why I’m Tying the Knot After a Lifetime of Fearing Marriage

Hello, my name is Sarah. I am a 29-year-old feminist and I’m getting married. Welcome to my new column, “The Feminist Wedding Diaries,” where I navigate the minefield of tying the proverbial knot while attempting to stay true to my feminist identity.

Since this is the first entry in my wedding planning diary, I should start by telling you how I came to be who I am; a person who considers feminism her job. Whether I am writing an article for She Does The City or working on my doctoral thesis, my goal in life is to do my part to advance intersectional notions of gender equality.

I have been a feminist for about 25 years now. I started a Girls’ Issues club in my junior kindergarten class. Our group met by a giant rock underneath a pathetically sparse tree every day at recess. Maybe two or three other people attended these meetings. We discussed how the boys wouldn’t let us play on the swings and how they pulled our ponytails. It was my big feminist break.

I realized I wanted to get married a little bit later than that. Well, okay, a lot later than that. Feminism was always a certainty to me, but entering matrimony wasn’t. For example, my little sister once went as a bride for Halloween. All dressed in white with rosy cheeks, she looked freaking adorable. That same year, I went as Anne Boleyn, the second wife of King Henry VIII and perhaps most famous for having been beheaded on the orders of her husband. This story explains the profound suspicions I had about marriage as a little girl.

In Middle School, I seriously considered the idea that instead of getting married, I would grow up and conceive a child with a friend. In this scenario I thought, said friend and I would co-parent without ever being romantically involved. It’s a plan I still consider a sound one, but unfortunately I cannot take credit for having come up with it myself. The idea was prompted by a screening of The Next Best Thing, a film where Madonna plays a straight woman who raises a child with a gay male friend, portrayed by the dashing Rupert Everett. It was not a particularly good movie, but at 13 I had only a vague appreciation for how limited Madonna’s acting range really was. Sorry Madonna fans. I’m not saying she isn’t a brilliant and totally revolutionary musical artist, I’m just saying I prefer my Madonna having sacrilegious sex on an altar.

By university, I was waking up in the middle of the night with cold sweats from nightmares about marrying former camp counsellors from when I was 11 or 12. These nightmares were not a reflection on those camp counsellors as people. When I knew them, they were all upstanding citizens with relatively clean fingernails. They might well make excellent partners for all I know. It was simply the idea of getting married to anyone that panicked me. In these nightmares, there was always a scene of me hyperventilating in a wedding dress right before I woke up in my dorm-room bed screaming, “NOOOOOO!” The wedding dress was usually a frilly monstrosity, the likes of which no one has worn since 1991. So in my dreams, apparently I was a time-traveler too. That last part’s kind of cool.

Then, when I was 26, a PhD candidate in Gender Studies living in Toronto, I decided on a sunny spring morning, once and for all, that I would never get married. NOT EVER. I decided marriage was a retrograde institution mired in compulsory heterosexuality. I decided I wanted no part in a practice that has been used to disempower women for millennia. Then, about three months later, I started dating the man who became my partner. The very same partner I am going to marry on October 1st, 2016. Yes, life is weird. I am the walking manifestation of dramatic irony.

After being engaged for only a short period of time, I have already learned planning a wedding as a feminist is no easy feat. Being someone who is fortunate enough to have had a robust education on gender issues, I am painfully aware of the sexist history of marriage. Marriage is an institution that has oppressed countless individuals. Let us remember that, in many contexts, women were considered their husbands property until the twentieth century. Not only this, but in Canada, spousal rape was only made a crime as recently as 1983. In some countries, such as India, it is still not illegal. Today in The United States, raping one’s wife or husband is technically a crime, but that does not mean it is always adequately addressed.

And of course, let’s not forget that gay marriage has not even been legal in Canada for 15 years. In the US, it’s basically brand new.

Ultimately, I know enough to know that marriage is a problematic institution that has been used as a tool to perpetuate hetero-normative and sexist notions of how we ought to live. So, why the hell do I want to enter it? For me, getting married has two main draws. Firstly, I like parties so a wedding sounds like fun. Secondly, and at least as important, I never want to leave my partner. I like to think of legally binding myself to him as a message to my future self. It’s a message that says, “Hey guys, if your life together ever becomes so overwhelming one of you wants to hightail it out of there, this dandy marriage license is there to put a block in your way!”

Yes, I know divorce exists. I know a marriage license does not guarantee a happy life-long future for any couple. We could still end things definitively if we spent the time and money to get divorced, but at least that legal hurdle would force us to take the decision seriously, to put thought into it and maybe reconsider. I get why legally tethering oneself to another person to prevent an impulsive breakup may not be for everyone, but to me, it’s a romantic gesture that says, “I love you so much I agree to pay a lawyer thousands of dollars should I ever want to leave you.”

It’s cliché and it makes me want to vomit, but after years of thinking marriage wasn’t for me, I changed my mind when I got together with someone I could see myself being with forever. Marriage may not be for everyone, and I’m not here to proselytize, but it’s something I’ve come to believe actually is right for my relationship. So, we have the date and it’s officially on. But how do I do my “Special day” the feminist way? I’m not sure yet. All I can say is: Watch This Space!