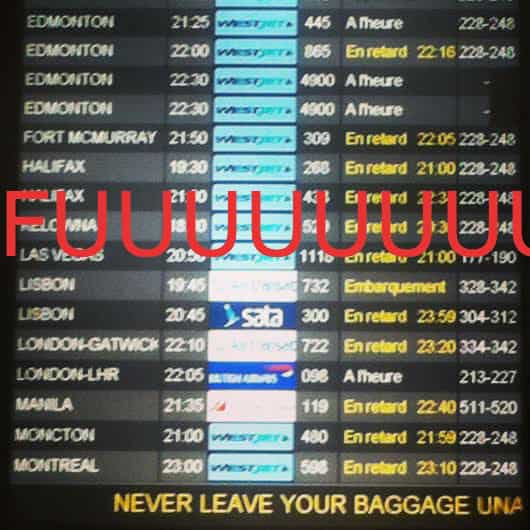 " Probably the only thing worse to be than at 'an American airport' is stuck in traffic in a cramped car where the heating is broken and for some reason Nickleback's Here and Now is stuck on repeat and you can't turn it off and someone barfed a bit in the back."
Life Stories

You’re a grown-ass woman. You think. Honestly you’re not even sure what you are anymore—the cramped, sweaty world of the interior of this plane is all you know. What was life like, before you boarded hours, if not days, ago? You can’t remember.

Sometimes in life, there are delays. Things happen. The bus breaks down or the train crew are late or a POLAR VORTEX SWEEPS THE CONTINENT or, honestly, you have no idea what’s wrong but you’ve literally been sitting on the tarmac longer than the duration of the actual flight you feel like maybe, now, you will never take. Sitting here clutching a cup of warm ginger ale and sad, salty nuts is all there is. This is your new life now. This is where you’re going to die.

WHEW. Heavy, right? But spend six hours sitting next to an intertwined couple of open mouth sleepers with bad breath in a (weirdly heated) (stubbornly stationary) plane during the middle of an ice storm and tell me your brain doesn’t go somewhere dark. Daniel Defoe was right: nothing is certain but death and taxes, and that when the captain asks you to “please bear with us, folks,” you know the delay is going to be at least an hour. Here are some other travel delay truths, from my frazzled, tired brain to yours:

Pay attention to the tone of the driver/flight attendant/whatever
This will be the first sign that something is amiss. The person on the other end of the microphone will even breathe apologetically, a sharp intake of oxygen to steel themselves before letting down dozens if not hundreds of tired travellers. As mentioned above, any use of the word “folks” is a bad sign. A casually dropped “my friends” suggests you might be there all night. A warning: the people in charge of this trip will lie to you. Any delay you are experiencing will always, always be “under an hour or so.” Under-an-hour upon under-an-hour later, they will tell you the real truth: “we should be on our way in five minutes… or so.” ‘Or so’ covers a world of sins. Instead of railing against your captain, crew, or George Stephenson, inventor of the first steam-powered locomotive, just accept that the people in charge are doing the best they can. Also: they already know how annoying this delay is for you. You don’t have to tell them.

Cut the Fun Guy some slack
Sometimes the transport staff will attempt to make the delay “fun.” This is almost always unsuccessful, but you can’t blame them for trying. And kudos to the Air Transat customer service rep last week who tried to get the waiting passengers to bring him “delay snacks” from duty free because “I can’t leave my desk… something could happen at any moment.” Nothing happened for hours, but I did share a few peanut butter M&Ms (the official snack of tired women with their hair in a greazy bun) and some LAUGHS with him.

It will be very tempting to get drunk.
As soon as the delay is announced, your brain will be like, “Right. That’s enough. The world is a terrible place, time to become a cartoon version of a sad drunk hobo from an old movie.” Try not to do this. You don’t know how long the delay will last in its entirety, leaving you stuck with two possible scenarios if it is a reaaaal long one: a) you are stuck at the airport’s weird iPad bar ordering drinks from your shiny e-server until you are too drunk to know which app is for ordering food and which takes pictures, resulting in a series of unflattering and, moreover, unsettling airport selfies that go viral when the bar’s staff share them after you leave, or b) you arrive at your location INCREDIBLY hungover, on top of the general travel hangover and/or jet lag you may already be experiencing. Not nice.

Location vs. Duration
European or Canadian airports are actually a very pleasant place to be stuck for a few hours, provided you have a bit of money and are well-rested. Train stations can vary in quality and comfort but there is almost always a heated, indoor waiting area with comfy chairs and a little kiosk that sells machine coffee and dry sandwiches. Bus terminals are… well, there’s nothing to be done if your bus is delayed. Long-haul bus stops are some of the direst places in the world, next only to American airports, a surprising but stalwart winner of #1 Worst Place in the Western World for ten years running, unless you happen to enjoy being squished in a hot space with a bunch of loud people all eyeing each other like everyone is probably a terrorist and where everything smells strongly and persistently of frying oil (I realize this sounds like a wild, horrible stereotype but it is actually just my experience of Washington Dulles airport on Christmas Eve last year. Sorry, Washington Dulles.). Probably the only thing worse to be than ‘at an American airport’ is stuck in traffic in a cramped car where the heating is broken and for some reason Nickleback’s Here and Now is stuck on repeat and you can’t turn it off and someone barfed a bit in the back.

Treat yo’self to pass the time
“My life is extremely hard. I was supposed to go on this trip at 4 and now… now, I have to go on the trip at 6:30. It is almost unfathomable how much strength and bravery I am showing in the face of what might be the most adversity anyone has ever faced. Probably someday a newspaper will run a moving piece on my Important Struggle, but until then, it’s time to make do the only way I know how.” This is how I ended up the proud owner of several fancy lipsticks. No regrets.

All told, I feel like a travel delay in 2014 is not really that big a deal. Presuming you’re wearing good travellin’ clothes (ie. pyjamas disguised as regular clothes (big sweater, leggings, comfy shoes, a nice scarf)), waiting around in a train terminal or an airport really just means you’re playing with your phone in a different location than normal, with people around. It’s not ideal, but you’re still going to end up where you need to be, and you have all the information the human race has ever discovered plus music and books and films at your disposal in a magical handheld device, so just pipe down and live-tweet the terrible time you’re having for the amusement of others. It’s the civilized thing to do. Bon voyage!

" Probably the only thing worse to be than at 'an American airport' is stuck in traffic in a cramped car where the heating is broken and for some reason Nickleback's Here and Now is stuck on repeat and you can't turn it off and someone barfed a bit in the back."