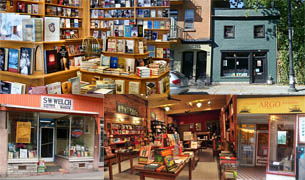 I want to live inside this store. And I’m not even trying to be funny. Nicholas Hoare is magical. Well most bookstores are magical but this one is just the magicalest. With wood furnishings, a distinctly British decor, and tall shelves abounding with face-out displays of beautiful, high-quality merchandise, this elegant shop, quietly tucked away on Greene Avenue, calls for hushed reverence the moment you step in the door. If they had eyes, my bookshelves would cry at the sight of the magnificent collection of literature. And the fashion, art and photography tomes! Ahhhhh.

This store is dangerous territory for me; I want to buy everything every time I visit. I mean I don’t, ’cause obviously, but the desire makes my heart veritably ache. A refuge from the city, I could (do) spend hours browsing here. Also, Adam Gopnick, New Yorker writer and former Montrealer called it his “favourite bookstore in the world” so, no bigs. BUT, go quickly: this beloved bookshop will CLOSE on July 31st of this year due to an insanely ridiculous 72% rent increase by the National Capital Commission. I know! It’s like The Shop Around the Corner all over again! ’90s Meg Ryan needs your help! But seriously, go. Greene – no, the city – won’t be the same without it.

A simple but powerful name for a simple but powerful place. This small, nondescript-on-the-outside secondhandbookshop is smack-dab in the heart of the McGill Ghetto, two blocks from the university, on tree-lined, student-filled Milton Street. On the inside, its teeming, chaotic shelves house works of literature, philosophy and poetry, a scattering of history, political science, religion and drama books, and a few literary mags and zines here and there. Going inside is like stepping into someone’s cluttered home library. Which, in case this isn’t clear, is awesome. It’s been around since 1975 and was originally run out of the apartment next door as an underground bookstore and literary salon.

It’s difficult to pop in for a quick visit on my way home and not leave with ten new-old books under my arm.

Another small-ish space with much inside to offer, at S.W. Welch, you can find pretty much any book on pretty much any subject. Fiction, non-fiction, poetry, history, religion, psychology, fantasy, mystery, philosophy, sex, sports, music, mystery and I don’t know what else but I bet that it’s there. Would you like a book on the history of prostitution in addition to your Steve Martin autobiography? No problem! This place is a Mile End staple and a great weekend pit stop: grab a tea from the new David’s location just down the street and browse the eclectic collection for hours. Also: hang around the neighbourhood often enough in the summer and you just might happen upon one of the store’s surprise $1.00 book sales. Yes, that’s correct. $1.00. YOU COULD FINALLY HAVE ALL THE BOOKS, EVER. Or get a lot closer to it, at least.

In addition to its assortment of independent lit mags and reviews (The Paris Review, Granta, New York Review of Books, helloooo) and novels, both new and classic, this cute ‘n tiny local shop offers a huge collection of comics, art books and graphic novels from cartoonists and artists throughout the world. I don’t know anything about comics though, so I always stop in for the distinctive selection of fiction and non I’m guaranteed to find. Stocking relatively unknown authors and artsy, small press publications alongside The Hunger Games and Jeffrey Eugenides’ latest, at Drawn & Quarterly, I always, always, find something awesome I’ve never seen before and didn’t know I needed, badly, until I saw it (Emma Straub’s Other People We Married and Apartamento magazine this most recent time, fyi). It also hosts book launches, readings and graphic novel classes on the reg.

A downtown fixture since 1966, Argo is one of Montreal’s oldest and smallest independent Anglo bookstores. You could almost walk right by it, so modestly does it sit on busy Ste. Catherine street. Walk inside, however, and it’s a small cave of books by the thousands. The shelves on shelves on shelves of literature and literary theory and criticism are an English grad student’s wet dream. The store also hosts monthly Open Mic nights for aspiring authors and regular readings by published writers so you know its slogan – “Where Montreal Readers and Writers Gather” – isn’t just trying to be catchy.