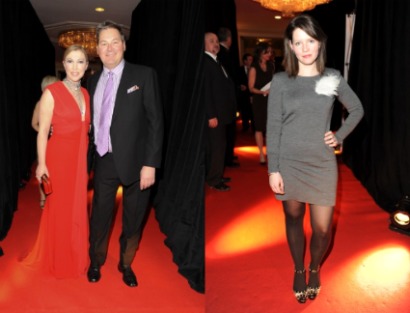 The Book Lovers' Ball at The Farimont Royal York was Black and White and Read all over.

On my way to The Book Lovers’ Ball Thursday evening, I was feeling a few butterflies in my basket. It was my first black tie gala, in so far as black tie events at Trinity College really don’t count, and I would be attending as media, meaning toute seule and definitely sans couture. A few frantic BBMs to my BFFs and some emergency comfort food (read: a Snickers bar) later, I emerged from the blessed PATH at the Fairmont Royal York Hotel, only to find myself face to face with my number one TV crush, Dragons’ Den’s Robert Herjavec.

After confiding in me that he’d figured out how many copies of his book Driven he’d need to buy every week to keep it on the best sellers’ list (for the past four months, I might add), I left my new billionaire friend to mingle, check out the silent auction and partake in some delicious nibblies provided by none other than celebrity chef Marc Thuet.

Held annually in support of the Toronto Public Library, the theme of this year’s Ball was Black and White and Read All Over, a theme most expertly interpreted by FLARE’s Editor in Chief Lisa Tant who stood out like a beacon of literary light in a very red Wayne Clark gown.

At the $600 per person dinner, each table was anchored by a celebrity author, the likes of which included Claudia Dey, Stuart McLean, Carla Collins and Shinan Govani. That dashing CBC radio man, Jian Ghomeshi, host of Q was also in attendance.

After a three course meal guests were treated to a fashion show featuring outfits inspired by our favourite best sellers, such as Nadya Toto and Shan’s interpretation of Eat Pray Love.

As a book-aholic, a former library circulation assistant and a Master of Arts, I cannot emphasize enough the importance of public libraries, where I practically grew up (anyone else remember card catalogs?) and which are used by 73 percent of the GTA’s population. I can think of no better reason to celebrate.

Contest: Win all the goodies from the Bask-It-Style Gift Lounge!