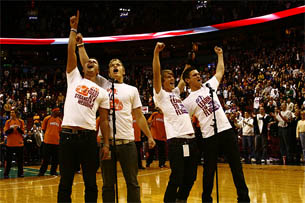 The boys from The Buried Life on the “Obama-era” of MTV, disappointing Hugh Hefner, and six hours in a prop cake.

Ben, Duncan, Jonnie and Dave wanted to make a TV show before they die. They also want to kiss Rachel McAdams, camp at the Playboy Mansion and play ball with Obama. These are all items on their List, a collaborate effort compiling the things they want to do before they kick it. On January 18th with the debut of their show The Buried Life, which chronicles the pursuit of the List, they’ll be triumphantly crossing off number 38 (make a TV show). To prove that their show doesn’t follow the boys-doing-dumb-shit routine a la Jackass, Viva La Bam, Kenny VS Spenny et al, they’re vowing to meet people along the way and help them cross things off their lists as well. So turn up the Coldplay, because while these boys will indeed be boys, they’ve got heartfelt stories on the side. Here’s what they had to say when I caught up with Jonnie and Dave at the MTV Masonic Temple.

What’s the most terrifying item you’ve crossed off your list?

DAVE: Number 33 on the list was to compete in a crump competition. We went to the heart of LA to some rougher neighbourhoods, had to find some friends and find a coach to teach us how to crump. And then we went on stage in front of a thousand people in the heart of Compton against one of the top crump crews in the United States.

How’d you guys do?

Dave: You’ll have to see. Some would say terrible, others would say awesome.
Jonnie: Somewhere in the middle

So Why Rachel McAdams?

Jonnie: Actually it was a bit of a bet, it was right when this thing started, I was with a friend of mine at the time –
Dave; A girlfriend at the time! She was a girlfriend!
Jonnie: – I was seeing her, and we were watching The Notebook, and I told her I had a crush on the girl, she said she had a crush on the guy and we somehow ended up having the conversation, if you really like that person, would it be possible to go out with them? If you’re a regular person and they’re a celebrity? I thought so, I bet that I could kiss her, And it turned into this challenge and now it’s on the list. One day we’ll know.

How do your parents feel about what you’re doing?

Has Duncan used the Minister license that he got online? (Task number 21)

Dave: He hasn’t used it! But my brother is getting married this summer, and he really wants him to do it! We’ll see. Hopefully this summer he’ll finally do it.
Jonnie: Yea, man up, seriously.

How did you decide what goes on the list? What got left out?

Jonnie: That’s a good question, each of us has our own individual things of what we want to do before we die, in addition to the ones we share. For us, the list is kind of emblematic of the feeling of this thing, you know? Go do something, go try something new or seize the opportunities that are around you. As for things left off?
Dave: The list always changes as we meet people and ask them the question…it was about finding what people wanted to do [before they die], and if it was cool then, ‘yea! We want to do that too, that sounds amazing!’ So the list is always expanding.

So you had already been offered a show, but you turned it down because you said it wasn’t the right time. Why is this the right time?

Dave: One thing for sure is the last time they were going to take the creative control of it, and we weren’t about to give that up. We knew what we wanted to make and we didn’t want anyone to come in to make some cheesy reality show out of the concept. So we held out and we commend MTV for picking it up this time. We’re the executive producers, the editors and the people doing it.
Jonnie: And that’s the list item, it’s make a TV show, not be in one… So MTV gave us the opportunity because they’re going through their shift.
Dave: Exactly, their going through their “Obama era” shift in their programming, and I guess we’re the first show.
Jonnie: We’re their test flight.

What do you mean the “Obama era” shift?

Jonnie: The feeling that they had was that they could sense that youth were kind of in revolt. There were changes happening. No one could really figure out what it was, though. They said from their research people this age wanted more than they were getting. They wanted substance and real stories as opposed to this fake stuff.

So that’s where you guys come in. How do you feel that the show is going to change the dynamic of what you’re doing?

In the episode where you break into the Playboy mansion, does Hugh Hefner really have no idea about any of this?

Dave: The first episode you see is us trying to attend a Playboy party.  We came up with the most ridiculous plan to get in – the most ridiculous thing I’ve ever taken part of- it was Jonnie and myself dressing up as oompa loompas and getting into a prop cake, and Duncan delivered us to the back gate of the mansion for a playboy party. And I don’t want to say too much more, but we were in the cake for six hours… After we finished shooting it we needed permission from everyone on camera- so we told Playboy about it and they said “there’s absolutely no way that we’re going to let you air you guys breaking into the Playboy Mansion, dream on.” After a while we finally got hold of Hugh Hefner, sent him a hand written letter and the episode. He watched it and gave us permission.
Jonnie: He wrote back and said, “I want you boys to know that I’m not very pleased.”

Jonnie: He’s a rapscallion himself.

Have you guys gotten in trouble at all?

Dave: we get in trouble about every episode because of the situations we put ourselves in.

What was it like hanging out in the cake for six hours?

Dave: Um, it was a quiet time. It was a tense time. Johnny had a bottle to pee in. It was so tense it only felt like an hour.

So when you’re off changing people’s lives, and doing all this gratifying stuff, who’s the most likely to cry?

Jonnie: Helping people takes a toll out of you. Each time you do it you put yourself into their lives. For each of these people we meet, it’s one of us that becomes particularly connected to that person
Dave: And usually one person will take on the role of really organizing everything to happen
Jonnie: It’s a big responsibility to step into someone else’s life and then leave. We stay in touch with people we meet –especially with a TV show- because we don’t want them to feel exploited.

So it it emotionally straining?