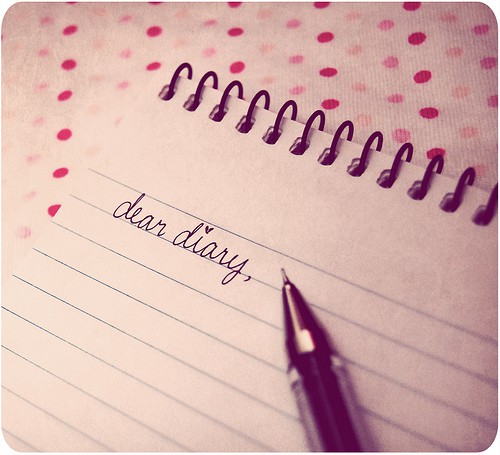 I recently found my high school diary. Reading through it was simultaneously the best and most embarrassing hour of my day.

I apparently had the notion that I was quite profound. Across many pages were inspirational quotes, followed by my own attempts at meaningful commentary. A magazine clipping that said “shoot the moon” was followed, in pen, by my thoughts:

Dream big and go for it. Remember Leah: you’re not just given dreams, you’re also given power to make dreams come true.

And dream big I did.

Later in the book I had a “list of things I wanted to do before I die”, which included:

But I think my favourite entry of all was one that began like this:

“Everyone has someone in their life that inspires them. That makes them see the world differently, and makes them believe in themselves. Someone that makes them want to be better.”

I smiled to myself as I read this, eager to get to the punch line and discover who my 2004 self had been referring to. My Grandma? My Mom?

I turned the page.

“That person to me, is Gwen Stefani.”

I laughed out loud and took a looooong sip of wine.

I read more. I laughed more and read them out loud to people and we reminisced about how young and stupid we once were.

And then I came across this entry, dated March 2004.

“Ohhhh look at me. Just a pathetic loser with a million wishes that will never come true.”

I so vividly remember writing that, tucked away in my bright pink bedroom missing my ex-boyfriend and knowing he was at a party that I hadn’t been invited to. I remember crying so much the skin under my eyes was literally rubbed raw and I had these weird lines across my face for days and days. I remember lying in bed at night stifling sobs that would be sure to wake up my parents in the next room. But more than that, I remember how truly hard that time in my life was; to be young and naive and think this was literally the worst thing that could possibly be happening.

A lot has happened in my life since then; things that have mattered much more and have left much greater impacts on my heart. Luckily, I’ve stopped being a pathetic loser with a million unfulfilled wishes and instead discovered who I am and how fucking great life is.

But I can honestly say nothing has hurt me as much or made me feel as absolutely helpless as I felt those long nights in grade 10. And it’s because I just didn’t know any better. I was too wrapped up in myself (and new to this whole idea of loss in general) that I had no reason not to think it was supposed to be life shattering. So I let it shatter my life, and it took me many years and broken hearts later to realize that perhaps life couldn’t shatter quite as easily as I thought it could.

I have since discovered that life, in fact, goes on. That things happen for reasons that you don’t need to understand but need to accept, and it’s simply easier and more fun that way. And perhaps that’s why we have life – to just try hard and be nice to each other and have a fucking good time.

When I first read my diary I had an overwhelming urge to go back in time and shake my 14-year-old self. To scribble out those horrifying motivational quotes and shake some sense into this insecure, pathetic loser. But I quickly realized I more so loved that I could laugh at it now; that I had experienced the naive love of a 14-year-old girl and had simply had the opportunity to grow up and change.

It is now 2015. I no longer keep a diary and have long since stopped turning to Gwen Stefani to guide me through life. I have, however, dreamed big. I’ve realized my dreams and embraced the power I have to make them come true.

But perhaps more importantly, I have eaten shrimp. And yes. I’ve even worn a trenchcoat.