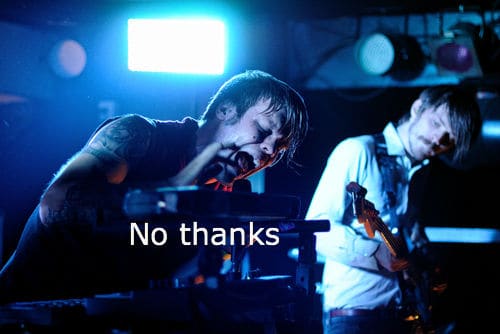 "In my formative years the musician seemed like a rare, exotic bird, but mid-way through my twenties I can authoritatively say that these dudes are bona fide pigeons."
Sex & Relationships

As I get older I’ve been trying to implement higher standards in an attempt to keep up appearances as a functional twenty-something: doing laundry on the reg, not lying to my mother when she calls and asks if I’m still in bed, tentative forays into physical exercise, that sort of thing. The confidence that comes from these minor changes is pretty great and so, in an effort to be a more posi person in general, I’ve applied similar standards to my relationships with men. The first rule is: NO MORE MUSICIANS.

In my formative years the musician seemed like a rare, exotic bird, but mid-way through my twenties I can authoritatively say that these dudes are bona fide pigeons (as in they are EVERYWHERE, shitting on you and being generally lazy).

My interest in music began in middle school and really took off in high school, ticking along like clock-work in correlation with my increasing angst. As I was exercising the shit out of my Gen 1 iPod, I realized that music was also a topic that guys wanted to talk about. Not only did they want to talk about it, they were also playing their own music (or barely recognizable covers), and eagerly seeking the groupie archetype. Well, hello! I think we can come (wink) to an arrangement! I proceeded to date musicians from the age of 17 through the age of 24. After six years, I’ve listened to a lot of shitty music, hung out in a lot of places that smell like stale beer, and know a thing or two about music fellas:

1) You will feel obligated to like their band, even if they suck.
You may even lose sight of what good music sounds like because your musically-inclined rock god will almost certainly shove a bunch of garbage bands down your throat in their infinite wisdom and desire to mansplain music to you.

2) They will not buy you drinks.
It’s not like you need a man to do this, but the gesture is always appreciated, right? You may get a free one via a wet, crumbling drink ticket they deign to pass your way. TAKE IT. ALWAYS TAKE IT.

3) The sex is almost always vanilla.
These guys get it on with younger girls on the regular, so expect a decent amount of finger-banging. I once dated a music guy who could only climax while hammering home in missionary. That being said, about 10% are pure freaks in the sheets.

4) Bring your own condoms.

6) Don’t expect them to write a song about you unless you break up. Even then, don’t expect it.
If it happens it will be terrible.

7) They are 60% likely to become mildly famous or tour.
Their ego growth when this happens is projected at 110%.

8) You will be the breadwinner.
This is great and empowering and don’t ever think otherwise.

Now, NO MORE MUSICIANS isn’t a hard and fast rule because almost every guy is, has, or will at some point moonlight as a Music Dude, making it impossible to swing a proverbial dick without hitting a man who plays an instrument. So, do the legwork, make your own conclusions, and go with bassists when you can!

"In my formative years the musician seemed like a rare, exotic bird, but mid-way through my twenties I can authoritatively say that these dudes are bona fide pigeons."