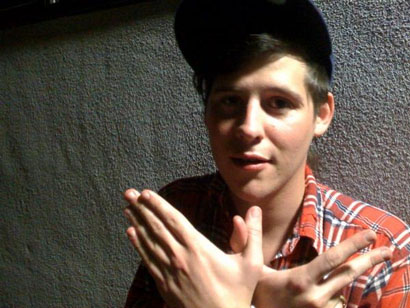 by Ivana Markotic
Before his MySpace friend list boosts to 50,000 and his songs have one million plays, take this moment to be there before the rest and listen to Wavves.

So the story goes: One bored kid in California decides to start laying down some tracks, puts them on MySpace, people like it, start writing about it, before he knows it there is a record deal and he is on tour. More or less, this is the plotline to Nathan Williams’ start in the music industry when the San-Diego based musician started recording his lo-fi tunes on GarageBand and releasing them.

His self-titled debut, Wavves, was released in November 2008 and four months later the follow up Wavvves (yes, that is three V’s in the second album title, and two V’s for the pseudonym) was released. Blogs have their panties all tied up over this guy and his lo-fi sound (it helps that the 22-year old is also easy on the eyes). The result of the hype? A tour. A drummer was brought on board for the live performances and they hit the road.

After an exhausting set of days performing at the 2009 SXSW, Wavves took the stage at Toronto’s Sneaky Dees on March 31st. Reviews were positive about the performance, although a little concerned about the show lasting only thirty minutes.

The appeal of the music rests with the rustic sound combined with the simplicity of repetitive lyrics. “So Bored” is the stand out song with the fuzzy riffs and wails about being bored. Interestingly, five of the fourteen tracks on Wavvves are an infatuation with goths, with songs including “Beach Goths” and “Summer Goth.”

Wavvves was released in February 2009 on Fat Possum Records, which is perfect timing in preparation to being the soundtrack to your summer.