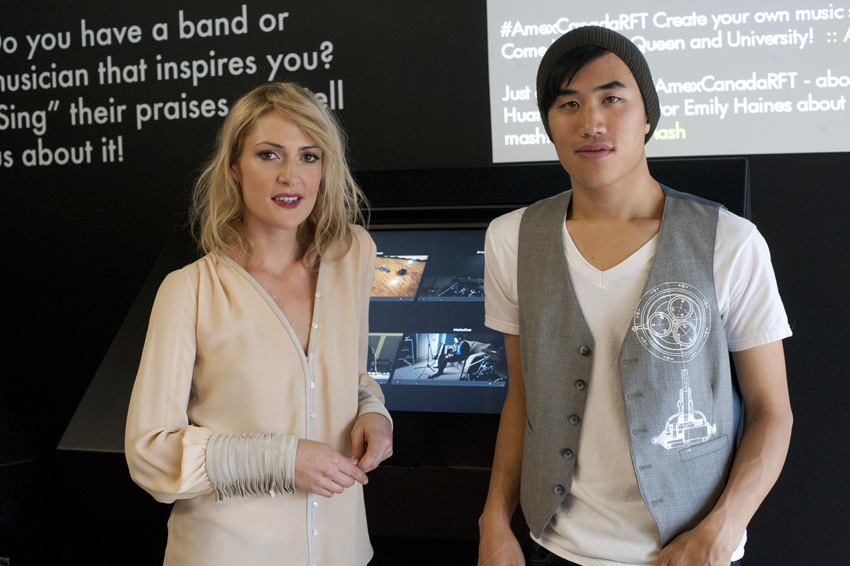 Three inspiring idealists were selected by public vote to work with highly accomplished mentors, watch their ideas come to life and present the ideas at American Express Room For Thought at the Four Seasons Centre for the Performing Arts.  Winning the music category, Andrew Huang was paired with Metric’s Emily Haines (I know, sooooo cool right?) to work together for his project entitled Ghost II. The result is better than we could have ever imagined.

With guidance from Emily, Andrew was able to build a mind blowing installation that allows the public to create a soundscape by clicking on videos of various musicians: haunting vocals, flute, bass guitar, percussion and anything that can make a distinct sound. The result is like a magical Sigur Ros song. (Okay, maybe not just like Sigur Ros, but we definitely built a track that we actually would like to play in our iPod.)

We sat down with Emily to ask her a little about why mentoring is so important and what being a part of American Express Room For Thought has meant to her. As huge Metric fans, we were extremely taken by her honest, humble and enthusiastic responses.

SDTC: What has being a part of this project meant to you?
Emily Haines: It was the perfect time when they asked me, I was so flattered. I’ve built my life in kind of an unusual way with my band; I’ve been on my own path. It is only recently that we’ve been recognized for it. Them asking me, considering me as someone who is accomplished enough to guide someone else is a really nice moment.

SDTC: Why is mentorship so important…for anyone?
EH: Growing up, I had key people who saved me from the teenage despair that everyone goes through and I hope to be that in someone else’s life. Mentoring is not telling someone what to do, but hearing them out and trying to chime in on whatever way you can to encourage them to take their own path.

SDTC: What was it about Andrew’s idea that really hooked you?
EH: I thought it was really cool as a YouTube idea, but you can also see it being a massive installation in a gallery. It’s a totally modular idea that could go really far, even the level of submissions that he got in this interface is a big step from where he started. We have big ideas in creating a massive mixing console where every person could be bringing up a different track from the submissions and controlling different effects: distortion, delays, plug ins. In addition to that fact, you could get submissions from all over the world making a global orchestra. He’s got the right aesthetic and vision to pull that off. He’s really talented; we will see if this ends up being his passion or if it takes him to another place.

SDTC: What has the experience of working with Andrew, as his mentor, been like?
EH: It’s been really natural. The way they structured the whole thing has been really organic. Talking to Andrew has been really easy. He’s open minded but knows what he wants and is open to suggestions. It’s a relatively new sensation for me. When you get something out of an experience it is because there is more happening than just you.

SDTC: Did you ever have a mentor?
EH: I don’t know if they would have called themselves that, but as a kid, there was one teacher, that just saved me. He got me an audition at the Etobicoke School of the Arts and helped me prepare for my audition. He put me on a songwriting path and saw that I was capable of a lot more. I feel like I’ve had those people in my life, come in and out over the years, and I’ve always looked back and said, “Wow, that was really kind of them to take five minutes and care about what I was doing.”

We can’t wait to see how Andrew’s idea grows even bigger. Honestly, it’s the coolest thing and we can really see the potential of it growing to be an international success. It’s an amazing tool for musicians but also incredibly captivating for people like us who simply like to experiment with innovative online projects.

Inspired by both the participants and mentors, we are starting to cook up our own big visions that will change the world. What’s your big idea? Get Started!