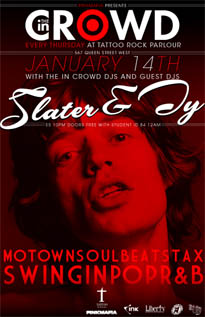 Shimmy, shake, jive, twist and shout with the In Crown and Shadows of Motown for the best mod night Toronto has to offer with special guests DJ’s Slater and Ty. Skinny ties and beehives encouraged. Doors at 10, $5 cover, get in free with student ID before midnight

Expect a little mid-January celebration with Canadian musicians at the intimate El Mocambo to beat the winter blues. Doors at 9.

See tough chicks in fishnets pillow fight. Professionally. It’s like a roller derby with pillows instead of roller skates. Tickets $15 at the door

They promise nothing over 105 BPM’s, so bring a snuggle buddy. No Cover.

The Cribs @ The Pheonix 410 Sherbourne St.

Smiths guitarist Johnny Marr travels with hyped indie band. Enter severe Deja Vous of the Modest Mouse tour of ’07, not that we’re complaining. The Cribs have released their fourth album Ignore The Ignorant and Mr. Marr is down for the ride.

The musical of the movie of the book. Nick Hornby’s High Fidelity made famous in 2000 by John Cusack has wormed its way onto the stage. Did we mention it’s a musical? Worth seeing, even if the only driving force is curiosity. Runs Jan 15th-Jan 30th.

He’s directed over 100 music videos for the likes of Alycia Keys, Usher and Kanye West. His lecture at Ryerson University will include a workshop with live video shoot demos where participants will learn to develop performance skills, creatively direct performers and create the right visual style. Tickets $20, includes after-party access.

It’s a quarterly. It’s a gallery. It’s both and it’s celebrating the launch of its 5th issue at its gallery headquarters.

Escape the horrid winter cold in a warm basement and a hot dance party with the beautiful people who dwell at the Drake. Doors 11pm, $5.

It’s a party about friends. A party about being being co-operative and supportive. About welcoming each others company. About copious amounts of alcohol and a playlist including Hot Chip, The Knife and The Ronettes.

Dirty dance party in the Market. Nights at the boat always call for mad dancing, so lace up those dancin’ shoes.

Order a #BagOfToronto to help support small businesses in your neighbourhood