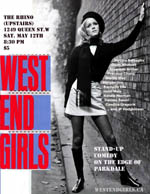 West End Girls, a monthly female comedy show, is back at the Rhino this Saturday, May 12th

West End Girls is a comedy show born of necessity: its performers were frustrated by the lack of stage time available for female comics, and they took to a wee café in Parkdale to change things. Out of these first shows grew a monthly comedy night so popular they had to up stakes to the Rhino, where they sell out the house on the regular. There’s always one token boy as a nod to the usual ratio of comedy programming in the city.

This Saturday, the broads are back with a show headlined by Sandra Battaglini, with Edinburgh Fest’s Dawn Whitwell, as well as Precious Chong, award-winning Marilla Wex and MORE! According to the ladies, their shows have a tendency to make people randy, so bring your favourite make-out buddy and get ready for some suggestive thigh-touching. OOOOH!