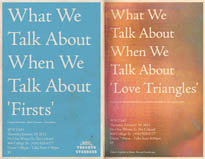 In August, Alicia Merchant, one of the creators of the Raconteurs storytelling series (formerly MothUP Toronto) thought up a new project: a more curated take on the concept of sharing ideas. She pitched her plan for a lecture series to pal and book club leader extraordinaire Peter Merriman, and What We Talk About was born.

A new Toronto lecture series, What We Talk About will bring together a surprise roster of intriguing minds to lecture on a specific topic. After the presentations, the speakers will sit down with Alicia or Peter for a moderated roundtable discussion. The first event, taking place Thursday night at No One Writes to the Colonel on College St., will, appropriately, tackle the concept of firsts. We can’t tell you who the speakers are, but we can tell you this: they’ll be discussing carbon neutrality, the 1974 Bob Clark horror movie Black Christmas, and Judy Blume. One of them works for a non-profit, one has an impressive critical journalism CV, and one used to write for Ready or Not. Seriously.

The night is young, as they say, but Alicia and Peter are excited to watch their brain child evolve organically. “We want the audience to come away learning something,” says Peter. The two met at a MothUP event, and solidified their friendship when Alicia attended a book club Peter ran at Type on David Foster Wallace. When I meet them for coffee at Crafted, they are wearing matching shirts. They claim this is unintentional, but intention is inherent to their mutual creation. The curated nature of the series is a cornerstone of what they are trying to foster: lecturers will be selected not only for their expertise on a subject, but for their potential to interact with their fellow speakers in an interesting manner during the moderated round-table, which will be a combination interview and discussion. “It’s refreshingly undemocratic,” Peter jokes. “The question is, who’s the despot here?” Alicia counters.

The series will continue next month, and installment number two, “What We Talk About When We Talk About Love Triangles,” already has speakers confirmed discussing King David and Krazy Kat. While neither of them are quite sure where this is going, Peter and Alicia are excited to let the new idea breathe, and take on a life of its own as it’s absorbed into the culture of the city. “I’ll be really happy if one of the speakers says, ‘That was fun, I learned something,'” says Peter.

Tickets for What We Talk About When We Talk About Firsts are available at Rotate This, Soundscapes, and at the door on Thursday, January 19th. Tickets are $5, and you can buy in advance for the February installment on Thursday night as well.

What We Talk About When We Talk About Firsts
No One Writes to the Colonel, 460 College St.
Doors at 7 pm, talks begin at 8 pm.
$5

Tags: David Foster Wallace, Lecture Series, No One Writes to the Colonel, Rotate This!, Soundscapes, Toronto Nightlife, Type Books, What We Talk About