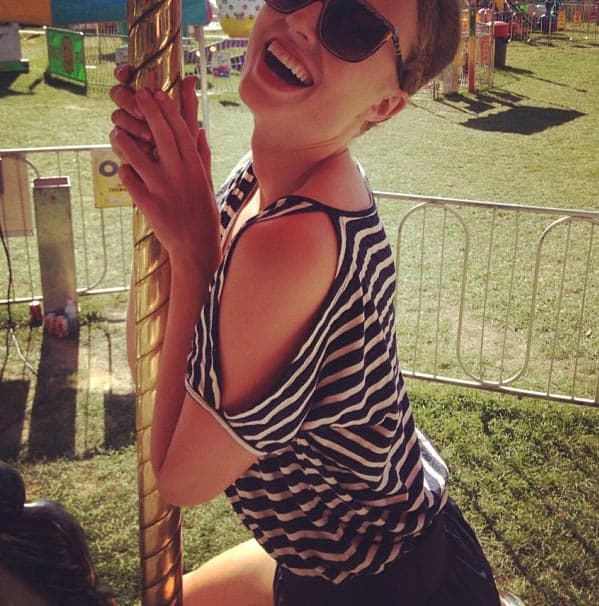 "To actually see the muscles and colors and twists and turns that make up a limb, and then to see them in motion."

Why I Love Your Body

I been looking at yo bodayyy and grrrrrl, you look fiiiiine. Okay, lest I seem the perv, allow me to expand on that. I know this may be coming on a little strong, but I really do mean it. I cannot get enough of bodies lately. Yours, hers, all of yers. It is no coincidence that this fervor has corresponded with another hot-sticky-take-yo-clothes-off-humid summer (thank you, Toranna. I tip my large-brimmed hat to you). When arms and legs started to peek out in April, I knew I was in for it.

After what seemed like a never-ending winter, it was just so nice to see bodies. To actually see the muscles and colors and twists and turns that make up a limb, and then to see them in motion. The endless permutations of gestures and tension and rest that express how we inhabit the world. And now that full-on summer is upon us, and short-shorts, featured-bras and crop-tops have emerged in all their glory (!!!), I find myself bowled over on a daily basis by your beautiful bodies. Not to get all “did it hurt when you fell down from heaven?” (or whatever that incredibly effective and flatteringline is), but in short (and “in shorts”) I been looking at yo bodayyy and grrrrl you look fiiiine.

This personal awakening to everyones’ Total Hottie Bodies (or: THBs??) seems in line with a larger trend that is happening, if not in the mainstream, at least on my Facebook feed (and hopefully yours, but it’s hard to tell with personally-curated media).  Sites like The Nu Project, (which SDTC covers here ) feature “honest nudes of women in their own homes”, and Jade Beall’s  Beautiful Body project emphasizes the beauty of the real body (in contrast with the doctored images we encounter a million times every day). Elsewhere, and seemingly everywhere else, Lena Dunham’s body has become a departure point for discussion. Dunham’s own nudity in all its rawness and realness inspires endless debates and gives exposure(YES PUN) to the issues the mainstream has surrounding representations of the female form.  Elsewhere still, the term “bikini body” is thankfully being taken to task.

What shocks me about my current “body fever” (running at dangerously high temps!) is that it is relatively new to me, a bit of an awakening, actually. I have been chilling on this earth now for a quarter-century, marveling at the “Ideal Beauty” of movie stars and models in magazines, not understanding until lately how experientially thin that is (YES PUN). My concept of beauty was a two-dimensional “thing”, without touch or taste or smell or texture; a processed and packaged product having nothing to do with the skin and sweat and smell of the living, breathing body. And so I was ignoring all the three-dimensional beauty in the world around me: how this wrist lifts a tea cup, how that mouth erupts in laughter, or that knee collides with a soccer ball; the shoulders that undulate with a sigh, a belly in sleep, the thighs at work. And how these gestures can occur in a million different ways, within one person, and between all of us.  It’s kind of a miracle, really (and don’t get me started on growing babies, the orig miracle/ “OM”). Your body, all of our bodies, The Body itself is inherently beautiful because it is full. We are all The Ideal, and the fact that we would everfeel otherwise is such a fucking shame.  And I’ve had too many conversations with amazing women—all paragons in their own right—to know that we often do feel otherwise, and that this is robbing us of really living, using, and loving our own bodies.

Now before I get carried away on a moonbeam to Lalalala Island, it bears mentioning that I get it. It is a difficult and deliberate process to include one’s own body in all of this. As much as I am very into (italics= too much?) your THB, it’s a daily effort to internalize that love and include my own. But I am committed to making that effort. Because—here I go on a moonbeam again—there’s a revolution happening. Whether it’s personal or cultural, I really can’t tell, but I certainly hope for the latter. A wise bud recently pointed out that in a capitalist society like ours, it’s actually an act of rebellion to love yourself exactly as you are, and in my chill life of ordering teas at the bar, I’m due for some rebellion. Soooo…wanna join me for a cool rebellion date with ourselves and each other? BYOBodies??? (I guess this piece could only reasonably conclude with me getting up the nerve to finally ask you out. Plz circle “yes” <3 <3 <3 )

But I’ll leave the actual final word on the matter to this incredible lady, whose wisdom and experience at 80 says it better that I ever could.   Maybe have a tissue and a pogo stick at the ready, to wipe thy eyes then jump for joy? Xo