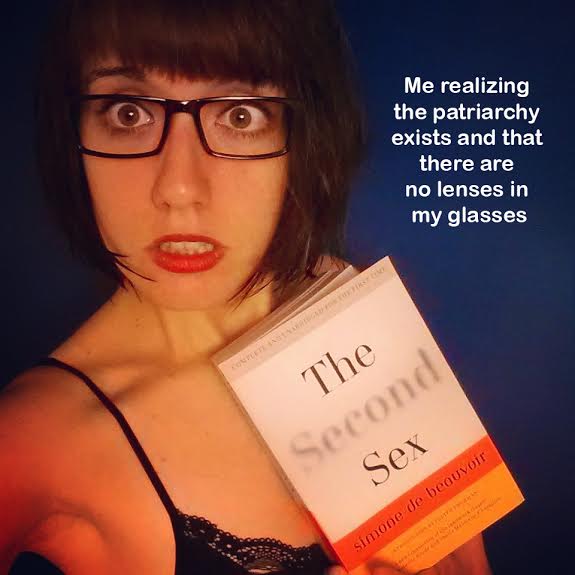 " This would be a lecture about how to handle your first lady-of-the-moon blood holding apparatus and what to do with the contents of the apparatus when emptying it."

When I attended university I majored in theatre with a minor in English, and at the end of the four years I can honestly say that I had acquired a few solid pieces of invaluable information. Information like “Shakespeare is important” and “Seriously though, Shakespeare is super important.”

Was it worth the thousands of dollars in student loans to receive an education that I most likely could have acquired via Wikipedia? I do not have the answer (I do: it wasn’t) but I am incredibly privileged to have been able to attend university at all and truly grateful for the opportunity to worship the Bard’s ultra sexy ruff. One of my biggest post-secondary regrets, though, was not taking any women’s or gender studies classes. I only became interested in the beautiful world of feminism near the end of my post-secondary adventure and it would have been nice to kickstart my obsession with Judith Butler, and bell hooks, and Simone de Beauvoir a tad earlier, ‘cause lord do those women enrich my life today!

It would have also been beneficial to take a couple of courses that taught less traditional “women’s studies” topics so my ignorant young self could have been less ignorant and more non-ignorant. I would be totally psyched to participate in and/or to teach (with my lack of a doctorate but excess of VERVE) any of the below offbeat, unconventional classes:

Intro to Getting a Menstrual Cup Inside You
This would be a lecture about how to handle your first lady-of-the-moon blood holding apparatus and what to do with the contents of the apparatus when emptying it. Should you flush it? Should you water your plants with it? Should you use it to make art? Should you stare at it for an hour in awe? Should you have a long, in-depth conversation with it? Should it replace your best friend? Should you start attending parties and introducing your coworkers to it? Should you get too attached to it and then need to distance yourself from it because you worry you don’t have an identity without it? These questions and more would be answered by your professor, who would in fact be a cup of blood.

“Don’t Peggy Olson Me, Motherfuckers”: Empowered Characters in the TV Workplace
Here we would trace the development of the Mad Men character from meek secretary to rockstar copywriter and in the process get mega motivated to pursue our own careers and find strength within ourselves and, like, destroy sexism in every industry and take over the world. As an added bonus one of the tutorial instructors would be Jon Hamm… in drag. Other TV characters’ journeys that would be discussed in this class: Leslie Knope, Kima Greggs, Willow Rosenberg, Olivia Pope, Lisa Simpson, Roseanne, Daenerys Targaryen, every other awesome character since the beginning of time (FYI this class would never end and would take place in your bed, aka it would be a perpetual slumber party).

Ilana Glazer’s ARC DE TRIOMPHE Theory
In episode 5 of Broad City, which is brilliantly titled “Fattest Asses”, Ilana explains to Abbi what an “Arc De Triomphe” is. Basically it’s when two women receive oral sex from two dudes or two other ladies who lay butt-to-butt while the women receiving the oral pleasure hold hands and form a metaphorical/literal arc, doing “Oprah hands.” In this class you would examine the origins and evolvement of this theory and how it has shaped society as a whole. There would be a practical component as well where you test the validity of it firsthand in a group project/orgy.

Modern Clit
Taught by the same professor as the above course, this one would be a more engrossing exploration of the magical, the legendary, the sometimes unfortunately difficult to locate/interpret/assuage clitoris. What is the difference between a contemporary clit and a 1892 clit, you ask? Well, for starters, the 1892 version was presumed to not exist since back then ghosts were more tangible than female orgasms were. Today the clitoris is widely celebrated by moaning women throughout the land but it’s still incredibly puzzling for a great deal of the population/guys I’ve sexed, get it together guys. The masses need to be educated so this gal can have less awkward conversations when heads are in her crotch.

Issues with the Robin Thicke’s Everything
For this credit you would aggressively, loudly, relentlessly rip apart Robin Thicke for a full calendar year. You would write papers criticizing all of his crap music and all of his infuriating interviews and all of his dumb ass Beetlejuice inspired outfits (there is at least one). You would condemn his disgusting rapey lyrics and mock his bullshit excuses and denounce his generally pervy outlook. You would also contribute to the “talking of the shit” re: his homeboys Terry Richardson, R. Kelly, and Satan. The final assignment would involve gathering Thicke-related paraphernalia, burning it in a large pit of fire, and dancing naked among the ashes while you chant influential tweets like “When did you decide you wanted to be a misogynist? #AskThicke”

Power Queefing 101
The queef is not only a hilarious sound that occurs often and unexpectedly during intercourse but it is also a skill that can be mastered and utilized at any time with practice and focus. There would be one exam for this course and it would be queefing on command, repeatedly, and in unison with your fellow classmates to the rhythm of a Joan Jett song of your choice. If a student would like to take the course but does not possess a vagina, farts can be substituted.

A Seminar in Changing a Tire while Breastfeeding
As someone who has never breastfed or changed a tire, the idea of doing both at the same time fascinates/terrifies me. I don’t think there would be anything more empowering than fixing your own vehicle with a baby hanging from your nip. Note: You have to provide your own car and your own real/fake baby and your own real/fake breasts.

A Tutorial in Watching Orange is the New Black
Exactly what it sounds like. The class watches each and every episode of Orange is the New Black over and over again and then discuss each and every minute of it while holding each other tenderly. Essay topics would include “Why Laverne Cox is the Second Coming” and “Why Laverne Cox is Better than the First Coming (Jesus).”

“All the Women, Independent” Research Study
In this course, you would do whatever the hell you want because you are your own person and you determine your own fate and you make your own decisions. The only requirement would be that you “smash the patriarchy, repeatedly and without mercy” but other than that you are a free bird and would be encouraged to soar, girlfrienddddddddddd.

See you in class!!