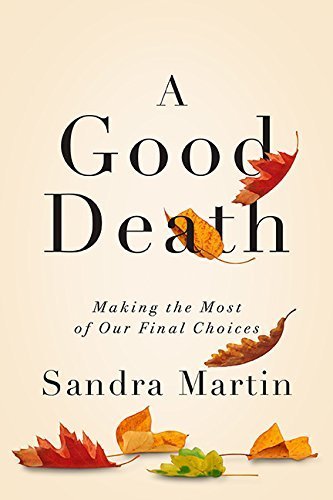 Word on the Street: Sandra Martin’s ‘A Good Death’

Word on the Street Toronto is coming to Harbourfront on September 25th. Since 1990, Word On The Street has proudly hosted the finest talent in Canadian literature. This year’s lineup includes Lisa Moore, Mona Awad, Steve Paikin, André Alexis and many, many others. In this series, we chat with some authors to watch out for.

Sandra Martin’s A Good Death asks the tough question none of us can avoid: How do we want to die?

SDTC: Why did you want to investigate the subject of physician-assisted death?

SM: “Whose body is this?” Sue Rodriguez, the B.C. woman afflicted with ALS, asked nearly twenty-five years ago in her campaign for the right to have a doctor help her end a life that had become intolerable.

That rhetorical question has become one of the biggest social issues of our time, not just in Canada but around the world. The population is aging and life expectancy is soaring. More of us are living longer, but thanks to medical technology we are not always living better, especially in the last decade of our lives. At the same time, we want the right to make choices about most aspects of our lives and we want our choices to be respected. I am a great believer in individual autonomy, but I know both from personal experience and research that your choices are limited unless you take responsibility for your own decision-making.

I wanted to write about courageous people in the struggle for self-determination at end of life and I wanted to ask questions about palliative care and a doctor’s conscience rights in order to understand why they often come into conflict with a patient’s wishes. Along the way I met fascinating people, learned a lot about my own core beliefs and discovered the inner workings of a popular movement and what factors affect its success or failure.

Which country’s model of assisted dying do you think would work here?

Canada has developed its own model based on legal medical research and clinical practice in Europe and the United States, primarily the Netherlands and Oregon. I believe we have the means and the expertise to implement the best assisted-dying regime in the world and I explain why in my book. Opinion polls consistently report very strong support for medical choices at end of life. Unfortunately, the people are ahead of the politicians. That is one of the reasons why my book is about politics as much as it is about legal and medical developments.

Because I believe people’s stories have the power to change lives, I have included many personal narratives in writing about the struggle to legalize assisted dying in Europe (i.e., the Netherlands, Belgium, Switzerland, Germany, England) the United States (i.e., Oregon, Washington California, Vermont), South America, Australia and Canada.

The European model primarily involves euthanasia, in which a doctor gives a qualifying patient an overdose, according to formalized due care criteria. Switzerland is the only country that allows foreigners, who meet certain criteria, to acquire a lethal prescription from a doctor, which they must ingest by themselves. Some people refer to this as “death tourism.”

The US model requires patients to have doctors certify that they are within six months of dying. If they meet the criteria, which varies from one state to another, they will be given a lethal prescription. The patient is responsible for filling the prescription and consuming the drugs. A doctor does not have to be present at the death.

The Canadian model combines the European and American approaches; however, political opposition both in Quebec, which pioneered medical aid in dying in this country, and at the federal level has led to the enactment of the hotly contest Bill C-14. The new law, which was only passed this summer, requires a patient’s “natural” death to be “reasonably foreseeable.” In other words, the law is about dying rather than suffering, which was the basis of the 2015 Supreme Court decision known as Carter. That law is being challenged on constitutional grounds in the British Columbia Supreme Court.

This is a fascinating and ongoing story and I am continuing to follow it.

What did you learn about the subject of physician-assisted death that most surprised you?

Many things surprised me, but the biggest problem I found was how hard it is for many people to understand that the sanctity of life is not an absolute. There are times and situations—however rare—in which death is better than being forced to continue living. Most people can understand physical pain and how it affects patients and families. They can also understand that it is probably wise to stop futile treatment for terminal cancer patients.

But we (and I include doctors, nurses, and family members in this category) often don’t appreciate that not all pain is visible. Mental illness, dementia and neuro-degenerative diseases like ALS, Multiple Sclerosis and Parkinson’s often mean patients suffer for decades. At least with terminal cancer, you know it will be over. I was surprised that many politicians and lawmakers didn’t seem to realize that suffering is a much bigger issue than having a terminal diagnosis. Many of them couldn’t draw a distinction between impetuous suicide and a rational decision that life has become unbearable. The first is often a rash, solitary and desperate act while the second is a conclusion reached by a long-suffering individual after reflection and ongoing discussions with doctors and loved ones.

What did you learn about yourself while writing this book?

Having watched friends and family members die, often in pain and isolation, I now know there are better ways. In researching and writing A Good Death, I learned that I want to die peacefully, surrounded by loved ones. I became empowered by the people I met: brave individuals who taught me a lot about resilience, love, courage and the importance of talking openly about life and death. Birth and death are the two extremes of ours lives. We should honour the process as well as the passage.