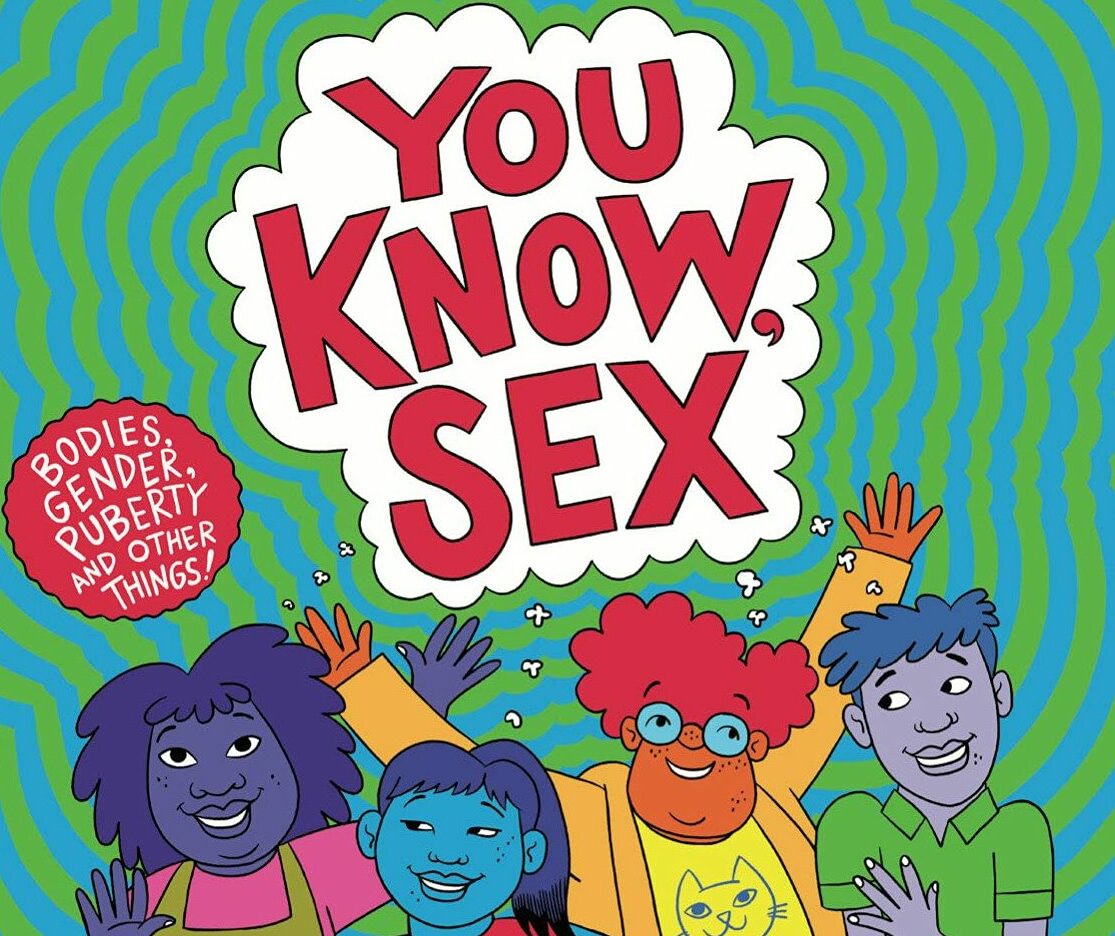 "I wanted a book about puberty that was based on relationships and not medicine.”
Books  Sex & Relationships

My mom literally threw the book at me. I was 13 and came home full of questions about sex after a particularly unhelpful biology lesson where I learned everything about fallopian tubes and fertilization but absolutely nothing about how to deal with the boys who rubbed against me in school hallways, or what to do about the man who liked to sit in his car exposing his penis to me and my friends on our way from school. I had “learned” about sex already from some forbidden books my parents hid in the closet ( Justine by Marquis de Sade was the most exciting find), and from Woody Allen’s Everything You Wanted to Know About Sex but Were Afraid to Ask, so as you can imagine I learned nothing. The book my mom threw at me was some antiquated text she herself grew up with, published in the 1960s with chapters painstakingly outlining the dangers of masturbation, whose descriptive techniques eventually served as an accidental instruction manual.

As a mother to a 12-year-old, I had an opportunity to do better but my son never asked and refused to ask, declaring me “cringe” whenever I’d bring up S. E. X.  Justine and masturbation manual aside, the one lesson I did retain was that, of course, it is that books can when the rest of us can’t. And with Cory Silverberg’s and Fiona Smyth’s beautiful, intelligent and absolutely essential new book You Know, Sex: Bodies, Gender, Puberty, and Other Things the task of explaining not only sex but most of its nuances (gender, relationships, body autonomy, puberty, consent, pleasure, safety, and more) no longer feels like a daunting task. I can simply pass him this incredible book and be there to answer any of his questions–provided my son invites me to any discussion the book might provoke (there’s an exercise component to it where the young readers are encouraged to include the trusted grownups in their lives).

Or not. Maybe he’ll never ask me about the book because as Cory points out laughing, Zoom screens apart, “He might not wanna get near it because you’re into wanting to talk about it.” They add, “But maybe at some point it will disappear into his room. I mean, there are six-year-olds who are talking about crushes and totally into it. But once they’re like 12 and 13 and they’re talking about crushes, it feels totally different. And you could have a kid that isn’t interested in those at all at six or at 13 and not in a bad way, not because they’re having problems, but just like it’s not that interesting to them. With those kids, giving them the book is a good idea, but if they don’t pick it up, it’s not necessarily a bad sign.”

At the time of our talk, it’s been a month and the book hasn’t disappeared, and it hasn’t been talked about.  While I have enjoyed exploring the 432 gorgeously illustrated pages, the target audience here has not yet picked it up. But whatever ends up happening, You Know, Sex is an excellent book to have lying around your house if you have puberty-aged kids. I would go as far as say it should be mandatory to have this book lying around as it’s the kind of book that not only informs its readers but also listens to them and shows them it understands — and not in that phony, preachy way we’re so used to from those clunky Sex Ed atrocities (This is a penis This is a vagina This is sperm This is chlamydia).

Consider its chapter on puberty, for example, where Cory says, “We wanted a book that deals with, you know, voice changes and growth and hair growth and all the classics of puberty but actually in the context of life. Most of which has to do with relationships. I wanted a book about puberty that was based on relationships and not medicine.”

And for those discerning readers for whom the author’s expertise (and that of dozens of social workers, academics and educators who helped) isn’t enough, there’s also an element of hearing it straight from those who had had similar experiences the kids are going through. Cory says, “I came up with this idea of getting other adults to talk about it so for growing pains or breasts, there’s the information. And then there’s a whole page with quotes from actual adults who talk about how they survived.”

Cory shares that the hardest chapter was the one about consent. It’s also the chapter that illustrates perfectly the amount of thinking and incredible nuance that went into creating this book. The chapter is a kind of a story within a story because You Know, Sex teaches not only by telling but also by showing—with the gorgeous (hilarious, and scary too) illustrations by Smyth but also with how those stories are told. Cory says they wanted to start by talking about consent and body autonomy outside of a sexual context, so the chapter includes an example of a kid falling asleep in a classroom.  “Here’s the thing: in a classroom setting kids’ body autonomy isn’t being respected. They are forced to sit. They can go to the bathroom, but they have to ask permission and they can only go for five minutes. So to be real in a room with kids who are stuck sitting and have a teacher say, ‘Your consent matters,’ it’s kind of messed up. I wanted the book to be logical and to make sense. So I didn’t want to ignore the fact that kids were having a hard time. Why are they falling asleep? Because maybe they’re experiencing sexual violence at home and it’s too hard to sit in a class and listen to a teacher, say ‘Your consent matters,’ when in fact in their life, it doesn’t matter? Or are they falling asleep because they don’t have any privacy, or whatever? It’s hard to make the argument that young people’s consent is important and that it matters when there’s so many examples in their lives where that doesn’t seem to be true.”

Essentially, the magic of this book lies in its ability to understand. Cory stresses that the volume could’ve been much larger—we are talking about sex after all, you know?—but their main goal was to speak to the specific group.  “I think they mostly use the ideas and the images and they adapt that to their lives because it’s really written for them. To read on their own, or maybe with a trusted adult or maybe with one friend. But with the book, of course, they have that intimacy of reading, removing all of the defences and the walls they have to put up to survive being in school. They don’t have to have those when they’re reading.”

As for my young reader, at the time of writing this, I’ve noticed the book migrated from its dusty spot on the bookshelf to the reading nook, its pages seemingly untouched, save it for a greasy thumbprint in the corner of the inside cover. But puberty lasts a long time, and the book is here when he’s curious and ready to read it.

Check out You Know, Sex: Bodies, Gender, Puberty, and Other Things by Cory Silverberg and Fiona Smyth published by Seven Stories Press.

Jowita Bydlowska is the author of Drunk Mom, GUY, and her new novel Possessed releases in October 2022 with Dundurn Press.

"I wanted a book about puberty that was based on relationships and not medicine.”