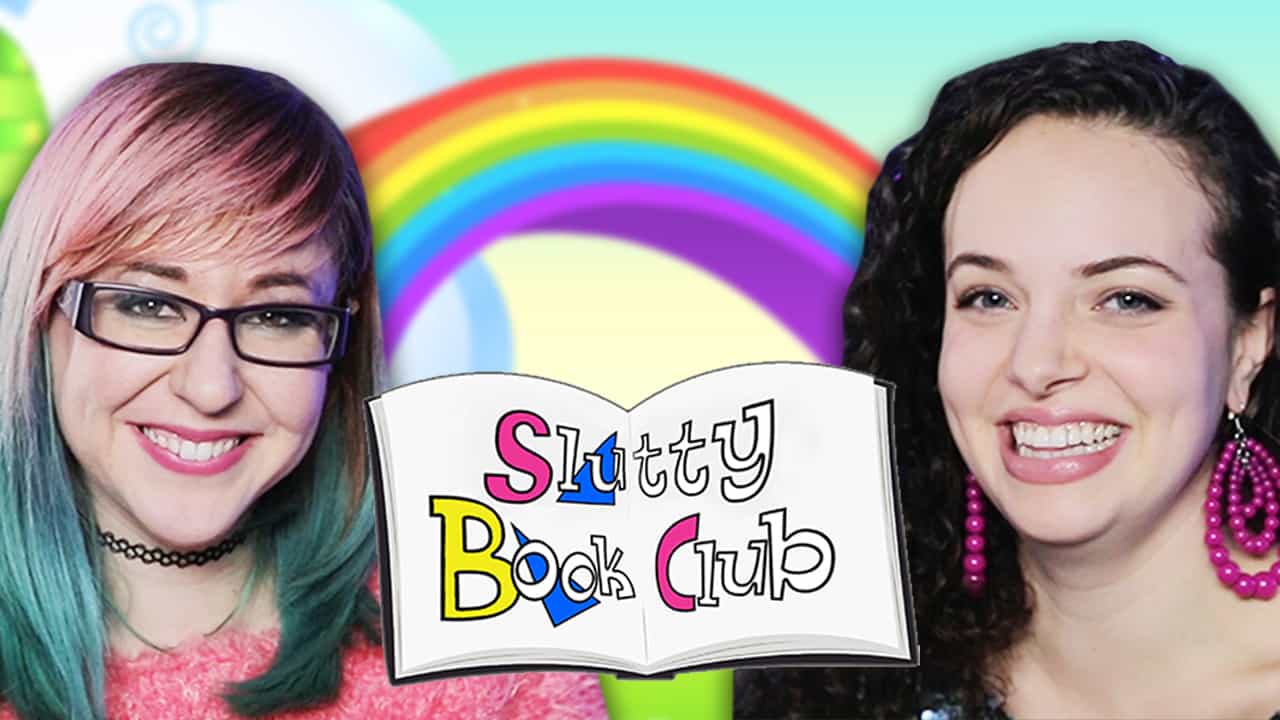 The series, which launched earlier this month, was created by and stars Toronto-based comedians and writers, Nikki Saltz and Sara Starkman, who met at a Comedy Bar stand-up gig last year. (“Sara did a joke about how vajazzling was turning women’s vagina’s into 5th graders’ backpacks, and I was instantly in love,” says Saltz. Starkman concurs: “It was instant neurotic love at first queef. I mean, sight.”)

Nikki: The series has gone through a huge metamorphosis from a scripted show. I’d love to say we came up with the idea for the show, but a lot of the conceptualizing was done by our great leader, Jay Bennett, and the team at Smokebomb Entertainment.

How did the web series come to be?

Nikki: Smokebomb put out a call for female-driven shows that could prove that this type of audience already existed. We did a ton of work learning about metrics, audience and personal brand values – it was like being at school.

Sara: And a lot of anxiety-riddled FaceTime conversations on the toilet.

Nikki: I use the world slutty in a positive way, and have for a long time. I’ll say that I wanna slut it up at the dog park, which just means I’m gonna pet every dog. It’s a re-appropriation thing. I think regardless of whether women like or dislike our love of the word slut, they can at least all relate to being called one by a man. We’re not down with men labelling our bodies or our sexuality. The title is a way of saying, “We decide what slut means, and we decide whether or not we are sluts.” And to clarify, we are. We are total sluts.

Nikki: I generally ask myself the following questions: Will Sara hate it? Is the person who wrote it long dead? Were they a weird man, a gross man, or an amazing woman?

Sara: Do Nikki and I have differing opinions on the theme/author/narrative? Does it give me a twinge in my minge? And can I purchase a copy within six feet of a bespoke chocolate shop?

Let’s talk about some of the blowback (no pun intended) you’ve received for not liking Kim Kardashian’s book. You were accused of slut shaming her – of all things. What kind of criticism did you receive, and why didn’t you like the book?

Nikki: People who didn’t like our Kim K episode were upset that we, as feminists, were suggesting Kim K’s book sucked because she shows her body. We love that she shows her body! I honestly believe that she’s a great example of not buying into the idea that women should be ashamed of our naked bodies or of our sexuality. But the show is still a book show, and her book is the most self-indulgent rubbish I have ever read. She had a real opportunity to put out a book of her naked selfies and talk about what that means in feminist terms and why she isn’t ashamed. We needed that book! Anyway, we hope she puts out a book with actual paragraphs in it. We are open to loving it.

Sara: To me, feminism is about believing in and being an active proponent for equality of the sexes. That doesn’t mean you don’t have opposing opinions or criticisms of material created by a woman just by virtue of her being a woman. Yes, there is a certain level of solidarity between women, especially in this business, but if you’re an asshole or a narcissist, it doesn’t matter what gender you are. Not thinking Kim Kardashian’s book was worthy of the trees chopped down doesn’t mean we don’t believe women should have the same political, social and economic rights that men do. Had Rob Kardashian made Selfish, we would’ve ripped it apart all the same. Let’s be real: the book is just a bunch of iPhone photos of Kim Kardashian’s hot bod and hot face. And don’t get us wrong, she’s sexy AF, but it was too self-indulgent. Hundreds of thousands of selfies? Take a picture of a flower, for fuck’s sake.

What has been a favourite book of yours so far, and why?

Nikki: Frankenstein. I love horror movies and I had never read the original book by Mary Shelley. Afterwards, I almost went out and got a full Frankenstein back piece tattoo. I might still do it. Or maybe I’ll get a vagina piece. The book is just so creepy and amazing and I fucking love that a woman wrote it.

What book do you really want to read but haven’t yet?

Nikki: I have a MASSIVE TBR (to be read) pile. I have a few books by Sam Harris on my list, a ton of classics, and I’m in the middle of the Y: The Last Man series, which I am loving. For the show, I want our next book to be by Charles Dickens. He’s a great writer, but also his female characters are a weak AF, and I want to take that on.

Sara: The Bible. Like, what’s all the fuss about?

Female-driven, female-led web series are kicking ass lately. Why do you think that is? Are we finally coming into our own, are the powers that be (white men) finally giving us some opportunities, or both?

Nikki: I don’t know why it’s only recently that a lot of companies are starting to open their eyes to the fact that women exist in their audiences and are powerful consumers of media. I think it has to do with issues of female representation entering the zeitgeist more. Smokebomb has been a great company to work with on this front. Even when we met for the first time, we were pitching to men and women. It makes a big difference. I think it comes down to making a decision as a young writer to just not fuck with companies run by sexist dudes. Don’t pitch your amazing work there. Go where there are supportive men and powerful feminists making decisions. Let the sad, weak, flickering flame of lame bro shows just die the slow death that they’re destined for.

Was that beautiful? I cried a bit.

Sara: I think it’s definitely a mix of both. Women are being given more opportunities, but at the same time, they’re earning their keep. These opportunities are finally allowing the world to say, “Oh hey, these chicks are fucking hilarious! We want to see more!” The only reason women are continuing to thrive is because of this reality. I mean, half the population is women. We’re tired of being unable to resonate with female characters in the media and tired of hearing stories told from the same white male perspective. Like, we get it. You hate commitment and you love pizza. NEXT!

What other projects do you have cooking?

Nikki: I have a horror production company, Ikki Pictures, with my creative partner, Vikki Blows. Our mandate is to make horror films directed by women. We’re in post on two films shot earlier this year, and are planning one more short before we take a stab at a feature. And then, of course, like every writer I’m developing a boatload of shows on the digital and TV fronts.

Sara: My true love lies in children’s entertainment, so I have a couple of animated shows I’m trying to get off the ground. I’m also marinating and baking a lot of stand-up comedy shows (that are NOT, I repeat, NOT for children) as well as putting finishing touches on a memoir. Delectable!

If you could describe the other in three words, what would you say?