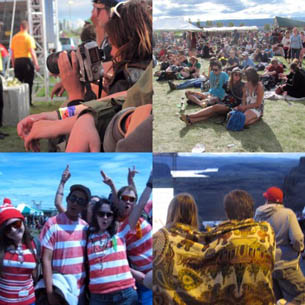 Lace up your leather sandals, dust off your cut offs, and for the love of god, apply your SPF. Ladies and Gentleman, it’s soon to be musical festival season, and whether you’re an old pro or a new recruit, you couldn’t have picked a better summer to dance with strangers in a field. As someone who has (more than once) taken a Greyhound bus across the continent (sacrificing personal hygiene, sanity, and once, luggage to the spirits of intrepid festival-going) I consider myself something of an expert. Below, a round up of some of the best fests happening this summer: who’s playing, who’s going, why you should be, and how drunk you can get.

COACHELLA: April 15-17, 2011. Empire Polo Club, Indio, California.
For the first time in forever, the surreal and seminal festival in the desert features a young guns lineup of headliners, instead of the old guard. This fresh and clean line up (Kings of Leon, Arcade Fire, Kanye West, The Strokes) meant a quick sell out, but if you were lucky enough to get a ticket, you’re going to have the best time ever.
Make sure you bring: A camera to snap a pic of Danny Devito scurrying through the polo field, a gallon bucket of sun screen, a watch, and a water bottle.
Small print bands you’ve gotta see: Cut Copy, Sleigh Bells, Tame Impala, The Rural Alberta Advantage, Jenny and Johnny, Here We Go Magic, Rye Rye, Best Coast
You’re coming home with: A random celebrity sighting, a sunburn, stars in your eyes, one thousand pictures of the sun setting behind the palm trees behind the scaffolding behind an indie buzz band, a comprehensive must-download list.

SASQUATCH: May 27-30, The Gorge Amphitheatre, George, Washington (heh.)
Happy 10 year anniversary, little music festival that could! Sasquatch is an awesome three-day romp in the beautiful Columbia River Gorge. Accessibility from Seattle and Portland mean gangs of good-time youths sneaking vodka onto the grounds in ziploc bags stuffed in their bras. This year’s headliners are the Foo Fighters, Death Cab for Cutie, Modest Mouse, Wilco, and The Flaming Lips.
Make sure you bring: A sweater, it gets chilly at night, some healthy food for your campsite (the dining options at the venue are less than great), a flashlight, and some campground games to help make friends.
Small print bands you’ve gotta see: Gold Panda, Dan Mangan, Basia Bulat, Das Racist, J Mascis, GIVERS, The Young Evils, Talkdemonic, White Arrows, Matt and Kim
You’re coming home with: A feather in your hair, a belly full of free guacomole someone passed around camp on the last day of the fest, a stack of stickers for cool Pacific Northwest bands, and some new friends.

PITCHFORK: July 15-17, Chicago, Illinois
If summer music festival rosters were a high school cafeteria, Pitchfork would be the cool, artsy kid slouching in the back who everyone wants to be friends with. Headliners for this year’s fest are Animal Collective, TV on the Radio, and Fleet Foxes.
Make sure you bring: Your best ‘I’m a blogger’ ‘tude.
Small print bands you’ve gotta see: The lineup is short, but they’re all must-sees. Cut Copy, Deer Hunter, Ariel Pink’s Haunted Graffiti, Destroyer, James Blake, OFWGKTA, Das Racist, Woods, Yuck
You’ll come home with: Serious street cred.

LOLLAPALOOZA: August 5-7, Grant Park, Chicago, Illinois
This year, Lollapalooza celebrates its twentieth anniversary. An institution in musical lore, Lolla began as a TOUR de force (haha), and has since retired to Grant Park for three days of musical greatness. Lollapalooza is a music festival for those who like to rock beside a gorgeous city skyline, and take off to the Art Institute in between sets. As well, like Coachella and Bonnaroo, they ensure that delicious local restaurants are the food vendors of choice. They haven’t released the line up yet, but stayed tuned in April.
Make sure you bring: Your favourite party people, and a hotel booked early. We mean reeeal early. Like, pick up the phone now, you. Also it gets very hot.