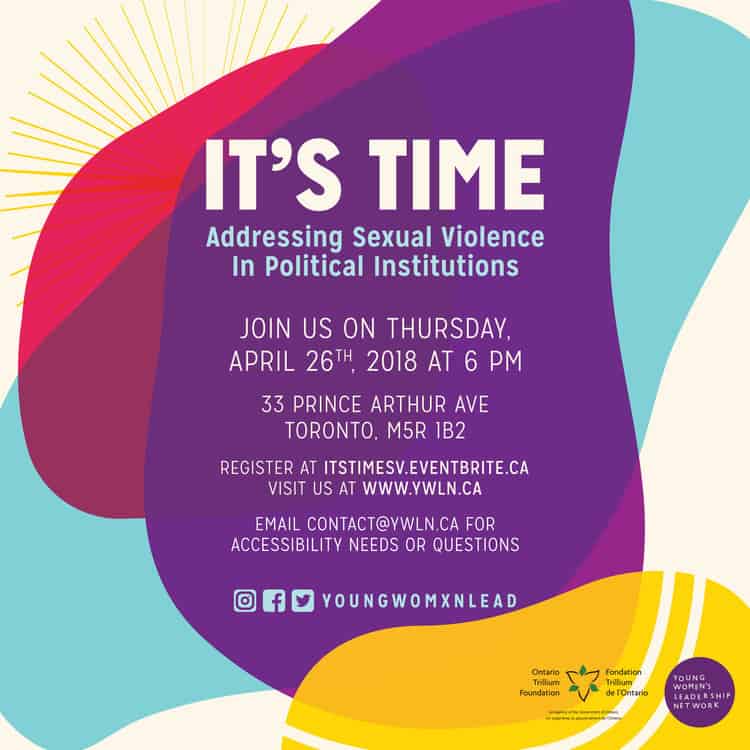 We absolutely need more women to be involved in the political process. But young women at the forefront of political and social justice campaigns can be exposed to gender-based sexual violence that often goes unnoticed. Young Women’s Leadership Network research found that 80% of women who experience sexual violence in politics either leave or decrease their involvement.

In response to this, YWLN is hosting It’s Time: Addressing Sexual Violence in Political Institutions this Thursday.

At the event, they will release their research and resources on addressing sexual violence within political institutions. “We will be hearing from local politicians and political activists on the importance of recognizing that sexual violence impedes on women’s civic empowerment and [how to] actively work toward creating consent culture and adequate support mechanisms for survivors,” says Arezoo Najibzadeh, Executive Director at YWLN.

With a provincial election coming up, it’s time for political institutions to take action. This event will be the first step in bridging the gap between survivors’ needs and support networks and policies available to them within political spaces. “Young women are leaders in civic engagement across the political spectrum, but it’s not enough for us to ‘lean in’ and get involved,” says Najibzadeh. “It is the responsibility of our political institutions that take proactive measures toward fostering their leadership.”