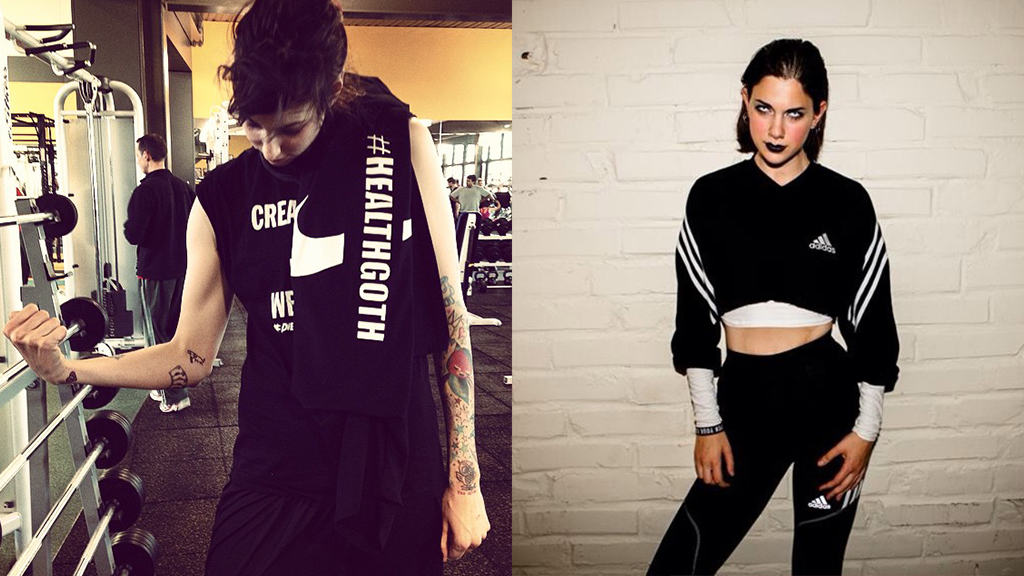 I’m Turning into a Health Goth

This week, I spent three days in a Leslieville juice kitchen studying biological assimilation, vegan food and Kombucha brewing. As a carnivorous, burger-loving woman, I was intimidated. I’m not a vegan, nor am I someone who has ever justified a juice cleanse by any means. Not to mention, a cleanse is like, $300 and I’d honestly rather spend $300 on almond milk, blonde roast coffee and Amazon books.

But then, all of a sudden, something happened; I was enlightened. Like Mel Gibson’s shiny hair in The Passion of the Christ, a bursting beam of glowing light exploded into my consciousness and I finally understood veganism, the benefits of bacteria water and why everyone is raving about cold-pressed juice machines. So without further ado, this is everything I learned this week about health goths, veganism, trendy hippie beverages and 100% organic juice cleanses.

What is a health goth?
You probably already have a friend who is a health goth but doesn’t know it yet. She wears all black, has a resting bitch face and owns a pair of Nike sneakers. Health goth is a style that’s like a celebrity trying to look “normal” doing errands. Nobody actually knows if these young people are working out or pretending to be interested in physical exercise, and that’s why this style is so chic. Health goths are literally everywhere (doing fake exercise-related errands) and I think I’m turning into one.

The 700 kinds of veganism
Before the next generation of knowledgeable twenty-somethings rebranded veganism on Instagram, I had no clue what it really was. To me, identifying as a vegan implied being raised in a small village where hippies with braided hair ate lawn grass and wore H&M’s alternative hemp line, “Hemp & Mahatma Gandhi.” Then, around a year ago, I started following Megan Stulberg (a super talented illustrator) on Instagram and felt totally inspired by her work with Vegan Girlfriend. And just like that, a mélange of healthy dietary options fell from the sky into my meat-fueled consciousness.

Compelled to learn more about healthy eating, I stumbled upon a Pinterest board of trending diets. The gluten-free movement started with Gwyneth Paltrow and Ryan Gosling, who originally promoted gluten-free living as a new healthy diet. Following the Wheat Belly craze, everyone cursed gluten as a slutty evil villain, thus sparking the gluten-free wave of higher prices and misconceptions about grains. Now there’s a variety of veganism, which includes strict vegetarians, people with celiac disease, gluten-free health goths, 24-hour detox vegans, and ethical and environmental vegans. Point being, mainstream health-conscious diets are fucking confusing. Where am I? Is this real? How many types of vegans can there possibly be? Apparently 700. Maybe more.

Everyone is talking about juice
It all started with SunnyD. When I was an innocent little kid, I drank SunnyD like Lil Wayne drank Sizzerp in 2009. It was loaded with Vitamin C, so I thought I was doing my little libido a favour by guzzling a six-pack of vitamin juice. Then, a study was released that condemned juice for being sugar water. Oh shit. Around that same time, big chain juice bars opened with fancy, rebranded juice machines.

So how are juices being made in 2015? Well, there are two juice-making methods in particular. One involves a centrifugal juice extractor, the fast-spinning machine typically found in 7-Elevens. The other is the Kanye West of juice extractors: the cold-pressed juicer. The difference? Centrifugal juicers are so 2009; they were once practical for convenience stores, but they don’t preserve nutrients because heat destroys the enzymes in fruits and vegetables. Cold-pressed juicers preserve these enzymes with a zero-heat extraction process. Now it makes sense why organic, cold-pressed juices are crazy expensive, and rightly so. Anyway, this is only a surface-level explanation of juice nutritional lingo, and I’m not a scientist or nutritionist. I’m just an ex-SunnyD survivor with a curious interest in health trends hitting Toronto, okay?

Embrace your inner hippie and drink Kombucha
As I said before, I spent three days in a juice kitchen with shiny machines like the ones in Willy Wonka and the Chocolate Factory. It was there that I discovered the notorious hippie water, Kombucha. For those who aren’t aware, Kombucha is a mildly alcoholic, fermented drink made with a culture of bacteria. If you know of it already, you’ve likely heard that it’s a go-to hangover cure, with added benefits of gut health and immunity-boosting power. In dieting terms, it makes you poo like a hit of Molly. Because let’s get real, all we really want in life is to live in a spiritually balanced, poo-free body that is clean and glows like a weightless baby angel. Or maybe that’s just me. Whatever.

Most importantly, gone are the days of fermented farts and stinky original blends! Now there is more than one flavour of Kombucha and that’s a very big deal. Hallelujah!

Poo-free shaman life
Stay tuned. Next week, I’m doing my very first 100% organic juice cleanse with raw vegan food. If you don’t hear back from me, assume I fell asleep in the frozen food aisle in the Maple Leaf Gardens Loblaws from extreme fatigue. Alternatively, I may rebrand myself as a spiritual vegan shaman. The future is unknown. But on the bright side, I’ll be poo-free and weightless, with glowing skin. And that’s awesome.

City Shred Toronto Winter Edition Will Bump Up Your Fitness In 2020 Posted on January 6, 2020

5 Mindful Tips To Enjoy An Imperfect Holiday Posted on December 17, 2019