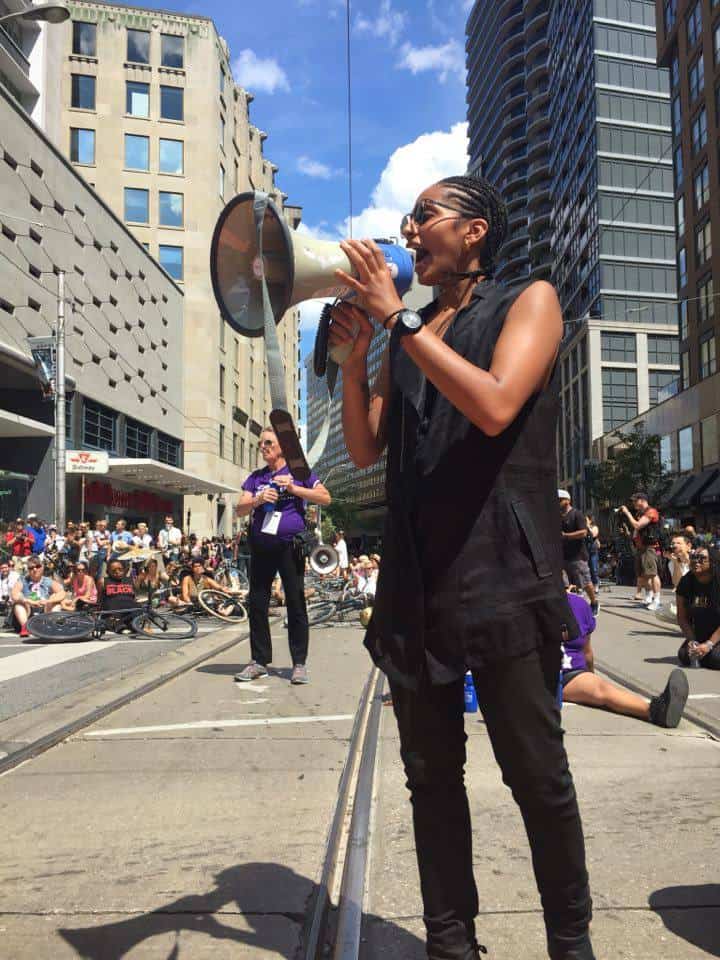 I’m tired. Exhausted. The Internet spaces have been rough for me this week. There’s so much hate. So much senseless hate. In the month, it’s been deaths upon deaths. We’ve been changing our profiles pics, creating new hashtags. I’m not really sure how much more I can handle. 49 gone (#Orlando), 250 (#Bagdad), 41 (#Turkey). An unarmed man shot by police in Baton Rouge (#AltonSterling). Then, less than 24 hours later, another unarmed black man in Minnesota (#‎PhilandoCastile). During a BLM protest, 5 police officers shot by snipers (#Dallas). I can’t watch the videos. Reading the details is enough for me to feel troubled. All these killings happened to primarily people of colour, marginalized people like me.

It’s been difficult, frustrating, disheartening, disappointing and upsetting for me, for all of us.

Last weekend, the Black Lives Matter – Toronto Coalition staged a peaceful 25-minute sit-in protest at the Toronto Pride Parade. This protest has sparked huge debates/fights on my social media space. Every person that refuses to listen or understand from a place of compassion, I have deleted. You want to argue about a group of people fighting to be free, desperate to be heard. It’s not the “place for it,” you say. You use words like “hijack,” “terrorist,” and “bully” because someone wants equality. BLM TO is “holding your parade hostage” because they want to be heard. You threw bottles at them, booed them, and hurled racist insults. You say, “It’s not the time and space to stand up/sit down and fight to have equal space. This is not the way they should be fighting. They should be more polite and respectable in their way of fighting.” Instead of trying to understand BLM TO and their demands, people on my social media are arguing without listening.

I’m not saying that BLM TO should be free from critique; however, when is the right time to protest? When is it convenient to hear the needs of the oppressed? To whom do we address emails about not wanting our people systematically killed, carded or incarcerated? How many personal histories do we need to reveal for our pain to be relevant?

If equality is a mountain, all lives matter is the top. It’s the desired goal. For every socially constructed category that marginalizes you, you take a few steps down. There are barriers to make it difficult for you to climb up. When you’re at the bottom, it’s extremely frustrating to have to keep shouting to be heard. If all lives matter, then you should be fighting and supporting the fight for everyone to be able to stand together. You should not be telling marginalized people that their desire to have the same freedom as you is wrong.

In the last few days, I have deleted a few people from my social media spaces. They’re not my friends anyway, barely acquaintances. They’re not important enough for me to want to correct or tolerate their ignorance. They can choose to be strong and wrong. I don’t need to partake in their condescending debates that undermine my lived experience. If you are not here for equality and freedom for all, we don’t need to be friends. I am not responsible for your comfort, nor is BLM TO. You can sit with the discomfort as I have sat with it since birth. I’m not going to argue with you, engage in your uninformed debates and all that jazz. Google is 24 hours. The library has free books. You can choose to educate yourself or keep reading ignorant articles and shut your eyes/ears to truth and perspective.

None of us are free, until all of us are free. You need to remember this. Because until the rest of us get our freedom, we’ll keep fighting for it. And you, privileged one, won’t get any rest until we get it.

“I have almost reached the regrettable conclusion that the Negro’s great stumbling block in the stride toward freedom is not the White Citizens Councillor or the Ku Klux Klanner but the white moderate who is more devoted to order than to justice; who prefers a negative peace, which is the absence of tension to a positive peace, which is the presence of justice; who constantly says, ‘I agree with you in the goal you seek, but I can’t agree with your methods of direct action’; who paternalistically feels that he can set the timetable for another man’s freedom; who lives by the myth of time; and who constantly advises the Negro to wait until a ‘more convenient season.’ Shallow understanding from people of good will is more frustrating than absolute misunderstanding from people of ill will. Lukewarm acceptance is much more bewildering than outright rejection.” Martin Luther King Jr.