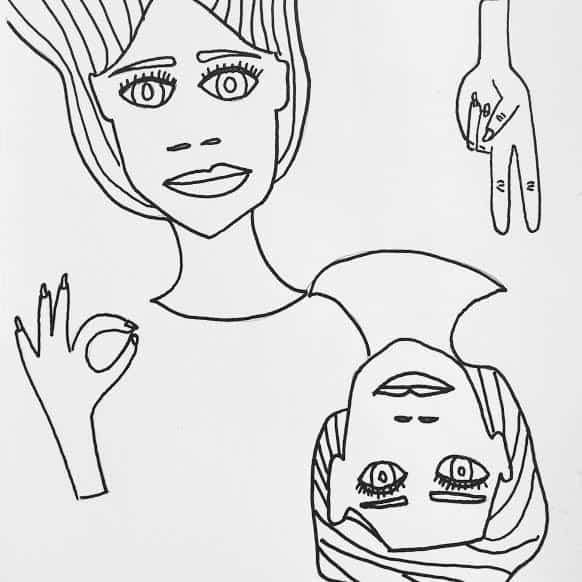 THE COLOUR OF GENDER

When I was a little girl, I wanted to be a black man. In 1996, I watched Space Jam and boldly announced to my parents that I wanted to buzz off my hair so I could be like Michael Jordan. It was a decade before bald was cool and my parents felt reluctant to shave it. Instead, my stylist cut my hair into an ugly mushroom cut and I officially became a boy at the age of six. Acting like a boy re-affirmed that I didn’t care about Black Beauty, glitter or the colour pink. I wore blue, green and red like the animals in Eric Carl’s story books. Growing up in a neighbourhood run by boys in the 90s, my preference in colour defined my gender, and that’s how it was. The neighbourhood was all that mattered when I was a kid.

It wasn’t until I turned seven that I learned what a “tomboy” was. It was like wearing a name tag that explained the complexity of my gender before I even said my name. When I introduced myself to new kids, I mumbled my name because Sarah was a tough sell for a little boy. I didn’t want them to know that I was a girl because they would treat me differently. Boys didn’t hang out with girls. It was fact. And I knew that. But my name called my bluff and I desperately wanted to lie about it, say my name was “Mike” or something. Not because I genuinely wanted to be a boy, but because I wanted to climb fences, play basketball and run around like the boys did. I still played with stuffed animals like every other little kid, but I really didn’t know what girls did in their spare time because my parents were so supportive of me wearing t-shirts with lizards and making mud pies in the backyard. And plus, I had a best friend named Neil and we were inseparable. He didn’t care that I was a girl because we understood one another. We watched Top Gun and burned ants with magnifying glasses in the driveway.

But gender became more complicated after that. Elementary school happened. I switched schools in grade two and left Neil behind to enter into a playground of black and white. My teacher announced to the classroom at the beginning of every school year. “Sarah likes to dress like a boy, but she is a girl.” Kids stared at me as if I genuinely believed I could fly. They didn’t understand why I dressed like something I wasn’t. Why I wore red instead of pink. Blue instead of purple. So I pretended like it wasn’t a big deal. I knew I was different than the other girls in my class because I didn’t grow up like one. My ears weren’t pierced and my hair had always been short, so I didn’t even know how to put my hair in a ponytail or braid it. Basic girl stuff. I had no clue. At times, I wanted to do what the girls were doing, but now everyone saw me as a boy. I was stuck between genders, in a strange divide where there wasn’t a washroom for girl who idolized Michael Jordan. Tomboys were one in 100. Especially in the middle of Alberta.

Things became a little more awkward after that. I was terrified to go to the washroom because girls would look at me funny. They told me to get out because I was a little boy. Adults at school thought I was confused and pointed to the boys’ washroom when they saw me washing my hands in the sink. I waited until everyone had left the washroom then would run in and pee quickly. I didn’t want anyone to see me in there. I didn’t want to pee to begin, with which probably explains why I peed my pants all the time when I was younger. When I was around eight, my mom took me into the women’s washroom during the Edmonton Symphony Orchestra and a lady told my mom sternly that I was too old to be here and should be taken to the men’s washroom. My mom smiled and tried to explain to the woman who looked at me with disgust. Everyone stared at us. It was a scene. I tried not to hear it and held my mom’s hand tighter instead. Strangers could be really cruel to a little girl who dressed like a boy.

And then my body started to change. The boys I hung out with became much stronger than me and I wasn’t interested in picking my nose and burping. I still liked playing sports, but not as much as I used to. I was scared to join any teams because leagues played by gender. I felt estranged from other girls. They didn’t know how to talk or connect with me or vice versa. It was an elementary school crisis. Often times, boys would play fight, push and trip, and it was violent. I tried not to cry to show that I wasn’t like the other girls, that I was tough like them – but I wasn’t really. I was sensitive and fragile. Boys weren’t fun anymore.

Sexuality was another chapter in my elementary school life. Having crushes on boys made things complicated. Adults tried to figure me out. Is she a little girl who likes boy stuff? Is she a girl who wants to be a boy? Is she a gay boy? It made me think about gender and identity in ways that other kids didn’t at my age. From my point of view, other kids had it easier. They had names that complimented their gender and favourite colours. Emily liked the colour yellow and dress-up. Brad liked the colour green and played soccer. I didn’t understand why it was one or the other. Pink versus blue. Glitter versus hockey. Video games versus dress-up. Boy versus girl. Silly really. Was it really too much to ask to like the colour red and want to be Michael Jordan? Like come on.

The summer before grade five, I picked up a Cosmopolitan magazine with my dad at Safeway. Alone in my bedroom filled with MJ posters and McDonald’s drive-thru hockey cards, I flipped through the pages of the magazine and saw an advertisement for Billabong. A woman wore a blue hoodie, red t-shirt and flared jeans with her friends. Wait, that girl isn’t wearing pink! I thought. I could dress in blue and red and be a girl at the same time. It all seemed so obvious now. I could brush my short hair differently and let it grow out. Like a pixie cut. I could buy accessories and finally be the gender I was. I could go to the washroom and nobody would stare at me anymore. I could re-brand myself as a sporty girl; like Little Michael Jordan on the Prairie! It may not be the dark blue I loved, but I could compromise with baby blue. There was a middle ground to gender that seemed tolerable.

A week before grade five started, my parents took me clothing shopping and I arrived to school in September as a girl for the very first time in my entire life. The teacher didn’t have to explain to other kids why I dressed a certain way and nobody stared at me when I went to the washroom. I became friends with the girls at school and caught up on things I didn’t know about. Like make up. Ponytails. Dancing. Black Beauty 2. And friendship bracelets. Everything sort of changed from this point on. Gender was less constraining. I could wear one piece bathing suits. Paint my nails. Sleepover with popcorn fights and sleeping bags. I transitioned into an entirely new gender overnight.

In the end, I finally surrendered to the colours of my gender. I was a little girl who wanted to be a black man and nobody understood why. Michael Jordan was my hero. He was tall and handsome and he was the best basketball player in the history of Looney Tunes. It was only after I started to dress like a girl that everything became much easier for me. Nobody asked me questions. I didn’t mumble my name anymore. I blended in. And it was sort of okay to be a little girl doing little girl things. I look back now on my ten years of boyhood and can’t help but wonder how the colour of gender has shaped me as a person today. Needless to say as a full grown woman, red is my favourite colour and Michael Jordan is still my hero.