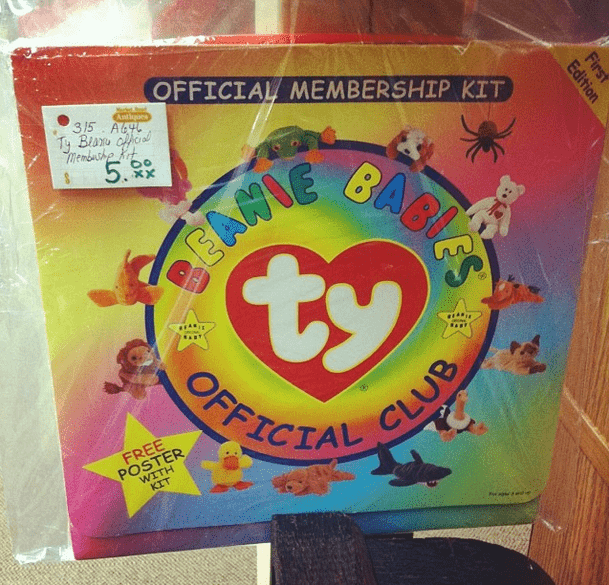 Every week, Today in Nostalgia looks at the trends we once clung to, defended, and were ultimately betrayed by. Memberships to the Beanie Babies Official Club accepted; BYOB too-large jawbreakers. Let’s do this.

Describe, please: Well, it was only a matter of time. You remember. I remember. Hell, even John Lithgow remembers because his character in 3rd Rock From the Sun went Beanie Baby (“Fuzzy Buddy”) happy and Jane Curtain had to intervene. Beanie Babies weren’t just a trend . . . they were a lifestyle.

So what were they exactly? Stuffed animals filled with beans, I think. (I was 12. What do you want?) Made by Ty – and by no one else, and don’t you forget it – they ranged from leopards (worth a small fortune) to bears (worth another small fortune) to birds (worth nothing then, and worth nothing now) to cats (same story). There were hierarchies, and there were conventions. I know this because I attended them zestfully, then asked for a membership to the Beanie Babies Official Club for Valentine’s Day in grade seven because, if you haven’t learned yet, in terms of trends, I took all of them seriously. (And they had my heart.)

Membership to the elementary school-equivalent of The Skulls bestowed upon you a poster, a folder, cards, and a certificate. It also gave you a false sense of entitlement so that when somebody came to school carrying their Beanie Baby with tags removed and/or unprotected (read: their toy was loved), you could scoff at them while sitting alone at lunch and think to yourself, “fool.”

At conventions, you’d show up with $25 of your hard-earned babysitting money, and glued to your Beanie Baby guidebook that helped you understand which Babies were worth either a buy, sell, or trade. Spoiler alert: you bought. You always bought. Everybody bought. And you told yourself you could spot a fake if anybody tried any funny business. After all, you were 12, you had a reference guide, and you were a card-carrying member of the Beanie Babies Official Club (of which only anyone who could afford the $15 kit at Hallmark could enter). The Babysitters could stuff it – this was the club that mattered.

Why they were cool: On a reflective, theoretical level (brace yourselves) they were cool because Beanie Babies were the last toys we could play with before we got “too old.” I mean, sure, we had shelves of these kindly faced stuffed animals situated next to our membership folders, but we didn’t “play” with our Beanie Babies – we “collected” them. They didn’t live on our beds or on the couch (like, you’d obviously rotate between favourites because that many Babies in your bed would kill you); they lived where we could look at and count them, all while convincing ourselves that they would pay for college. (Or, more realistically, for more Beanie Babies.)

But more accurately, Beanie Babies were cool because they gave us (a false sense of) power. While Pogs introduced us to the world of destructive gambling, Beanie Babies were our gateway into the world of investments. We were “investing” with every tiny toy. And because of those investments, we were “elite.” After all, not everyone went to conventions and scored a Canada Day Beanie Baby bear a mere three months after its debut. Some people just went to Hallmark at the mall to score like some average schmuck, and others didn’t have any. (And those people are real investors now.) For a limited time, Beanie Babies guaranteed a type of status now reserved only for people who collect art. And I do not collect art, but I collected Beanie Babies, so I yes I totally get why everybody at gallery parties act so above everyone else.

Odds of a comeback: None. There will never, ever be a Beanie Baby comeback because the people who hyped Beanie Babies to begin with were just as enthusiastic about them as we were. And because of that, there are now more Beanie Babies in the world than people, and I’m almost convinced they’re still breeding. And how can we know for sure? We can’t track them. And for that, I blame everyone who cut those damn tags off.