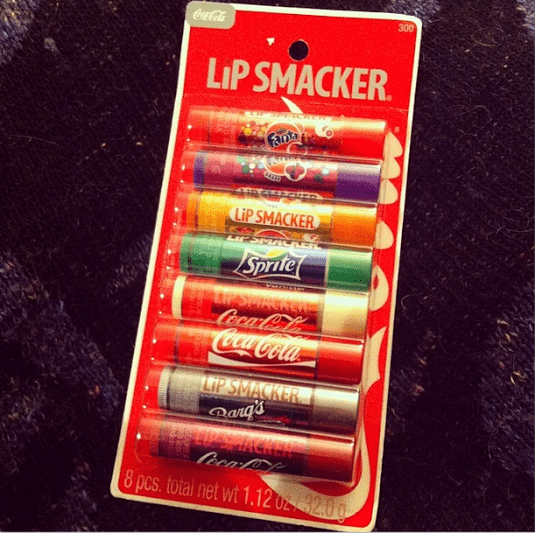 "I have never regretted a beauty decision more than when I jumped the Bonne Bell ship for 'better' lip balm."

Every week, Today in Nostalgia looks at the trends we once clung to, defended, and were ultimately betrayed by. Memberships to the Beanie Babies Official Club accepted; BYO slap bracelets. Let’s do this.

Describe, please: As a 28-year-old woman, I have never regretted a beauty decision more than when I jumped the Bonne Bell ship for “better” lip balm. (Well, that’s a lie. Technically, I regret dying accidental bleach blonde patches into my hair when I was 21, and I also regret most choices I made between 13 and 25, including but not limited to beauty ones, but still. Let me have this.)

Lip Smackers were everything. They were the stepping-stones to adopting full-blown lip colour (the Dr. Pepper tint is and always will be my favourite), they legitimately prevented chapping, and they were cool. Oh my lord, they were so cool. So many flavours, so many colours, and then there were the limited-edition JUMBO Lip Smackers I remember wanting so bad in grade nine, only to lose within the week. Ultimately, they were an affordable beauty product that actually ruled, until we told ourselves we’d outgrown it. We were wrong. So wrong.

Why they were cool: If you were like me, you weren’t allowed to wear makeup at age 11. And hey—that’s valid. I spent all my money on Spice Girls stickers at the time (which Today in Nostalgia will get to, let me make that perfectly clear, this is a promise), so my parents were probably wise to put a cap on every other decision I made. But that said, Lip Smackers were “allowed” because they were technically “balms.” In my parents’ eyes I was basically purchasing a slightly more exciting version of Chap Stick. And if that more exciting version happened to have a little pink or red tint to it, I couldn’t be held responsible for what I didn’t “know.”

It wasn’t like we could test them. For $4 every week (as per one’s allowance), you could treat yourself to a new and improved scent and tint. And treat ourselves we did—all the way into high school when SOME people started wearing MAC. (Not us True Poors, of course, but some people.) Prior to this switch, Lip Smackers gave us all a taste of adulthood, allowing us to emulate cooler, older people putting on lipstick to look awesome and powerful. Ultimately, they were the cosmetic equivalent of our Dads’ Root Beer and bubblegum cigarettes—they let us feel grown-up without making us actually grow up. Which is why they’re so wonderful now: they bring us right back to the ‘90s.

Odds of a comeback: Well, now that we are freethinking adults with actual bank accounts who can buy all the lip balm in the world, let me be the first to say: Lip Smackers never went anywhere. Or more specifically, they hadn’t gone anywhere… until Shoppers Drug Mart elbowed out Bonne Bell and replaced it with our broken hearts. I went a store this weekend to find a pack of soda-flavoured Lip Smackers in the clearance bin for $7 (that would’ve gone for almost $20 in our day), and realized that by not appreciating Lip Smackers when I had the chance, I would now suffer the consequences. (Having to go to a different store, I guess? Hunting out Dr. Pepper Lip Smackers on eBay? The stakes are high.)

Fortunately, we’re grown-ass women now who don’t have anything to prove via cosmetics or anything else. We can wear and use what we want, “fancy” or nostalgic, and bask in the glory of lip balm that both works and brings us joy. As an adult, I know that I’m not wearing Root Beer-flavoured Lip Smackers because I have to. I’m wearing Root Beer-flavoured Lip Smackers because I want to. Yes, no “real” lipstick has managed to supersede my love of Dr. Pepper. So, is it a comeback? Call it “common sense.” As in we get to have it again, and stock up on makeup’s answer to Lisa Frank. Now where’s my Leonardo DiCaprio fan book? It just got 1998 up in here, and those pages are about to get some Dr. Pepper-tinted kisses.