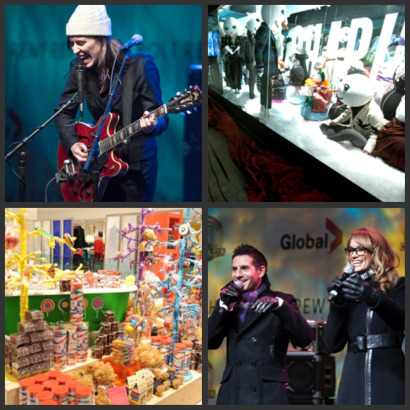 The Holt Renfrew holiday windows are a part of my annual tradition. I moved to the city four years ago and have since attended the unveiling ceremony every year. Maybe I’m just a sucker for the festive season (I’m the girl that gets excited for the red cups at Starbucks), but more than anything it’s the street party meets high fashion, combined with live music, and of course the beautifully executed windows that keep me coming back ever year. Not to mention a reason to shop…

The evening, hosted by Holt Renfrew’s President and CEO, Caryn Lerner and ET Canada’s Rick Campanelli and Kim D’Eon, began with a short performance by Kingston natives, The Abrams Brothers. The trio of fourth-generation musicians put their signature bluegrass twang on a cover of “Viva la Viva” by Coldplay. I really enjoyed their infectious energy. I also enjoyed their wardrobe; the boys were dapper and decked out in head-to-toe Holts goodness.

This season Holts enlisted the vocal stylings of Juno Award-winning songbird Feist (who graciously stepped in last minute for actress and one time Glee singer Kristin Chenowethwho unfortunately couldn’t make it due to illness) to headline the show. Topped in a white toque, Miss Feist warmed up Bloor Street with all her best numbers – from “My Moon My Man” to “Mushaboom” and “Sea Lion” to “I Feel It All.” You’d never know the girl hadn’t played in a year, but then again… talent like this never dies.

There were some serious Feist fans in the crowd but I couldn’t help but notice the lack of Christmas songs in the set list this year. Cue the window unveiling! The red velvet curtains fall and reveal another smashing job-well-done by the visual team. Six windows displayed an array of very stylish penguins in ensembles by Gucci, Lanvin, and Ralph Lauren, snowmen dressed up as Karl Lagerfeld, Coco Chanel, Anna Wintour, Isabella Blow, and Toronto designer Phillip Sparks, and Swan Lake ballerinas in sequins and tulle. Decadent but not overdone.

Guests were then led to the third floor where the hot cocoa and macaroons were being served. Dylan Lauren, founder and CEO of Dylan’s Candy Bar and daughter of Ralph Lauren, was on site for a sweet meet and greet. If you were lucky enough to get a good place in line, she was also autographing giant chocolate bars.

Holt Renfrew kept its doors open to holiday shoppers until 9 pm and a percentage of sales were donated to United Way. Let the cash registers ring! The holiday season has officially begun – you heard it here first.