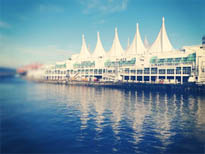 A recent jaunt along the Pacific Northwest left me with some splendid time to explore Vancouver. What to do, what to see? Combined with local tips, online inspiration and straight up glorious a’wanderin, here’s what I ended up doing with 48 hours in Van-City.

1. Grub Ultimately, my lifelong goal is to go to every spot Guy Fieri checks out on his hit Food Network show “Diners, Drive Ins and Dives”. Lucky for me he did an episode in Vancouver so I found my way to 2 featured spots: Save-On-Meats and Meat & Bread. Err, carnivorous favoritism was unintentional (and tasty).

Until recently, Save On Meats (43 West Hastings St.) was a butcher shop, founded in 1957. Then restaurateur Mark Brand took over. Now the spot has added on a diner with an inventive menu, a community garden across the street and supplies tons of meals to neighbourhood enrichment programs for struggling members of the East Side. Not to mention it has own reality show “Gastown Gamble” on OWN Network. I had the infamous Mac N’ Cheese, Fried Chicken and split the Apple Brown Betty with pals.

Meat and Bread (370 Cambie St. and 1033 Pender St.) is bringing well-done homemade charcuterie to an urban food culture that seemed somewhat lacking. If the packed lunchtime rush was any indication, locals are crazy about this spot. I had the staple item Porchetta sandwich with salsa verde and strolled down to the unbelievable ocean and mountain views along the downtown harbour to feast away. Yum!!!

2. Totem Poles It’s a misty afternoon and slightly grey out and I wander into a Totem Pole carving studio on Granville Island. Haida Gwaii artist Clarence Mills and pal Robert Dobie are blasting AC/DC, carving away on Totem Pole projects from small to gigantic, and having a good laugh. Robert (seen carving the large Totem Pole) was working on a commissioned piece for Oregon State University and Clarence was finishing up something for a friend. It was really cool and felt right to honour some of Vancouver’s (and Canada’s) rich Aboriginal culture and admire these beautiful works of art being built.

3. Bike Rides I had un-seasonably awesome sunshine for the bulk of my Vancouver meandering adventure so what better way to spend a sunny day than to rent a bike and explore. By the downtown harbour, I loaned out some wheels from one of several choices, Trevor Linden Fitness Club and the rest, as they say, was pedal to the metal!!! I headed straight for 988-acre oasis Stanley Park and took full advantage of the Oceanside bike trails that take you all the way around and through the park. You cycle past several lookout points to spot and pretend you’re an old-world explorer breaking new ground from the Orient, gorgeous sandy beaches, and a seawall harbour. I kept going till I made my way almost around the whole city and back. “It’s not a huge place,” as one local told me. Back to the bike rental shop that evening where I felt refreshed and glowy from the crisp ocean air.

4. My Vancouverite pals were eager to take me to Gastown’s unique lounge spot Guilt & Company for a night of live tunes and homemade pickles. Its downstairs location gave it this fun grotto-like feel, with exposed rock walls and a Jenga obsession spotted around the bar. The live entertainment ranges weekly from Burlesque, Cabaret, Comedy, Soul & Blues music, singer-songwriters, jam bands, MC Battles and competitions for and hosted by local musicians.

Someday we will meet again for round 2, beautiful Vancouver!