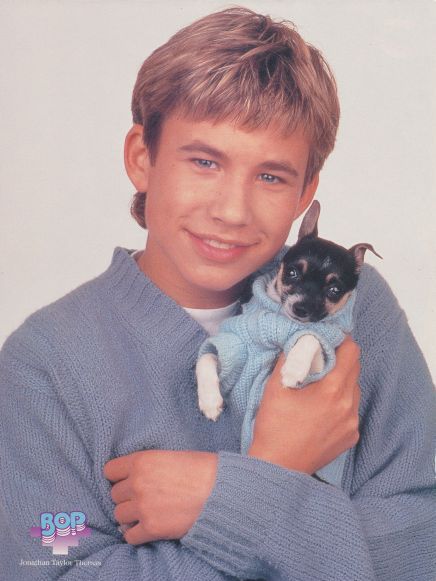 "One of my friends had a crush on Kevin from BSB and we all thought that was so weird because he was 'too much of a man.'"
Events & Culture

I’ve left a long trail of celebrity crushes over the years, but the following are the ones I remember most fondly and who will forever hold a piece of my young, fangirl heart.

At one point in time, every girl was in love with JTT – and really, how could you not be? He was forever on the cover of Bop magazine and our TV screens; his baby blue eyes and lucious blonde locks drawing you in. I don’t need to tell you how great he was in Home Improvement, or how adorable he was in The Lion King, or how rugged he was in Wild America. JTT was the complete package and he most definitely ruled the 90s. (If someone can tell me where he is and what he is doing now, I will be forever grateful. I just want to know that he is still alive somewhere.)

Like JTT, Devon Sawa was a blonde-haired, blue-eyed cutie who stole the hearts of many girls during the 90s. I was so unbelievably jealous that Christina Ricci got to kiss him twice, especially during that slow dance scene in Casper. The line “Can I keep you?” will forever make me weak in the knees. Just ONCE I would like someone to say that to me.

I remember the boy band era fondly. We girls were busy idolizing the Spice Girls and then, suddenly, the boy version arrived to sing sweet nothings to us and make us all giddy. Every girl had her favourite member and when it came to the Backstreet Boys, Nick and Brian had the monopoly when it came to young girls’ hearts (I remember one of my friends had a crush on Kevin and we all thought that was so weird because he was “too much of a man.”) I was a Nick girl myself and liked to think that he was only ever serenading me.

So by now you’ve probably figured out that I had a huge thing for blonde-haired, blue-eyed boys back in the day. Leo was the first crush who’s face was displayed on my bedroom wall and I have very vivid memories of kissing his fake movie poster lips before going to bed. He was perfect in Titanic and while I cried throughout the whole movie, I cried most when his character disappeared into the ocean abyss.

Shawn Hunter of Boy Meets World was my first introduction to the bad boy. Cory was cute and all, but Shawn wore leather jackets and had floppy hair and came from a broken home. He was like this little lost puppy dog that you wanted to cuddle and take home.

During middle school, Ryan Phillipe would greet me everyday from inside my locker. His sultry expression made it seem as though he was so in love with me and his frosted tips were 1000000x better than any 12-year-old boy’s at the time. I was definitely too young to understand most of Cruel Intentions when I saw it but I did understand that Ryan was sooo hot in it.

I will never not have a crush on Johnny Depp because he is never not sexy. He’s one of those men who’s just like, “Oh hey, you thought I was good looking last decade? Well look at me NOW!” My crush developed after I saw Edward Scissorhands, which seems weird but is also a testament to how Mr. Depp can make any character attractive.

Seth Cohen may have had excellent taste in music, but Ryan had that whole Rebel Without A Cause-thing going for him. He had me at that “Whoever you want me to be” line and is probably the only guy who makes a wife beater look good. I’ve never consulted Marissa (R.I.P.) on the matter, but I’m positive that Ryan is a damn good kisser too.

Julian Casablancas (lead singer of The Strokes) is one of the few people who can sing literally anything and make it sound amazing. His voice is the definition of sex and his image is pure rock ‘n’ roll: greasy hair, leather jackets, sunglasses. He’s mysterious; has terrific genes (his mother is a former model and was Miss Denmark in 1965, and his father is the founder of Elite Model Management); and writes beautiful songs. So yeah, he’s perfect.

"One of my friends had a crush on Kevin from BSB and we all thought that was so weird because he was 'too much of a man.'"