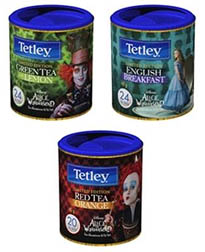 As a film buff with a couple of Literature degrees under her belt, next month’s Tim Burton movie confuses my instincts. But the book-nerd in me acknowledges that Mr. Carroll would probably get a kick out of the psychedelia that the Alice in Wonderland trailers predict. Plus I love seeing an interesting new take on a classic (if it’s successful) and Mr. Burton certainly has a vision. Literally one, and herein lies the rub. His films are not necessarily one-note but as a director, he’s been making the same sort of movie since we wanted our bushes trimmed by Edward Scissorhands. And the stubborn and foolish romantic in me (who nearly considered skipping rent in November at Portobello Market in order to buy an antique globe with the Wonderland characters hovering over Australasia) wonders if the beloved Alice; girl-dreamer extraordinaire, deserves the conveyor belt Burton treatment. I’ll see the movie at some point and cross my fingers for a great retelling.

Then this piqued my attention:

The Alice in Wonderland tea-party has gotten corporate sponsorship! Another addition to the madness surrounding the movie which has included the three largest UK cinema chains boycotting the film’s release because the studio won’t commit to waiting the requisite 17 weeks before a DVD release and Tim Burton turning the lovely Johnny Depp freakin ginger!! That doesn’t mean I don’t kinda want a canister bearing the white rabbit cause I think I just might….Clearly there’s a way of reaching the age bracket that cannot (in good conscience) buy figurines and stickers. This piece of synchronicity is witty so I continued to play that game as I did my weekly shop:

·       Kathy Bates’ mug on Heinz bottles for a rerelease of Fried Green Tomatoes.

Do movies in grocery aisles make being older than 10 just a bit more fun? Is anyone curious about Burton’s take on Carroll? Is anyone uninterested in the film but excited for owning a version of Johnny they can have their morning cuppa alongside? Have I lost any and all hip credibility for having seen Fried Green Tomatoes?

Finish Off Dry January With These Beautiful Mocktails From Pluck Teas