The film tackles the discrimination experienced by Black women when they opt to wear their hair naturally. The film captures the fraught journey of a young Black girl as she wears her afro to school on picture day. Facing unexpected consequences, including contemplative and concerned looks from adults, racist comments from her educators, and micro-aggressions from her fellow students, PICK illuminates a struggle for emancipation in a world that enforces the regulation of Black bodies.

We asked Harris about the film this week.

SDTC: What has your own personal journey with natural hair been like? Was there a turning point for you?

AKH: As a child, I thought to be beautiful you had to have straight, long hair and be white. This message was reiterated many times. At 11, I straightened my hair chemically (called relaxing or perming). It wasn’t until I started making PICK that I began analyzing why I committed to such an extreme process to change myself for 12 years. After a year of PICK pre-production and intense introspection, I did the BIG CHOP (where you cut off your straight “relaxed ends” so you can start fresh with your natural afro) and had my afro back for the first time since I was a child. My natural hair returned and so did my childhood wonder and freedom.

What did making this film bring up for you personally?

PICK helped me find my voice again. I went from having an insecurity that I never spoke about, to explaining it to people all the time. Black women understand the film when I say, simply, “A girl wears her afro to school…” In the predominantly white film spaces I found myself in, it was difficult to “justify the film’s importance.” Eventually, I realized that I don’t have to justify PICK to anyone. I found my voice, but I don’t always have to use it, especially when it will drain me. The film speaks for itself. So I can Be Still. 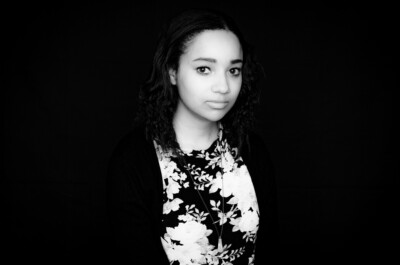 What did making this film teach you about yourself?

PICK taught me that being a highly sensitive and emotional person is my greatest gift. That my mission as a filmmaker is much higher than any gatekeeper’s approval. That there has always been an army of angels simultaneously whispering in my ear and shouting my truth from the rooftops: in every state I am in, I am worthy!

What was it like working with Hazel? What drew you to her in selecting your lead?

I was drawn to Hazel because of her glow; she was carefree. She wore her natural hair so proudly. After meeting her, I realized that I could not direct this film until I had my natural hair back, which is what truly inspired me to do the big chop. Working with Hazel was effortless. Despite the fact that this was her first film, she brought a level of emotional maturity and confidence to the film that is beyond her years.

I hope to share a glimpse of what Black women experience, so that people will empathize with us and be more careful with their words, especially when it comes to the impressionable hearts and minds of children and youth. I hope people will remember that love is all we are!

What do you hope young Black girls get out of seeing this film?

I hope young Black girls will feel seen and heard. I made this film for you. I see you and I love you.