I only make it home twice a year. The flight from Toronto (where I currently live) back to Vancouver is expensive and long, so my time at home is always short and cherished. My parents’ house in Richmond, B.C., the Vancouver suburb where I grew up, is luxurious—A TV! A fridge full of food! A fireplace! A car I can drive around in!—but lately y’all have made it substantially less heavenly.

It’s been a few years since you first came into my life, but things are only getting worse, so I think it’s time we had a little chat. I know that you’re just trying to live your lives, but so are the rest of us…and frankly, you’re getting in the way.

For the past few winters, hundreds of you have decided to inhabit the field that lies just outside my parents’ home. Heck, I don’t really blame you. There’s a lot of grass and a really sweet playground. I grew up swinging from those monkey bars. I get it. 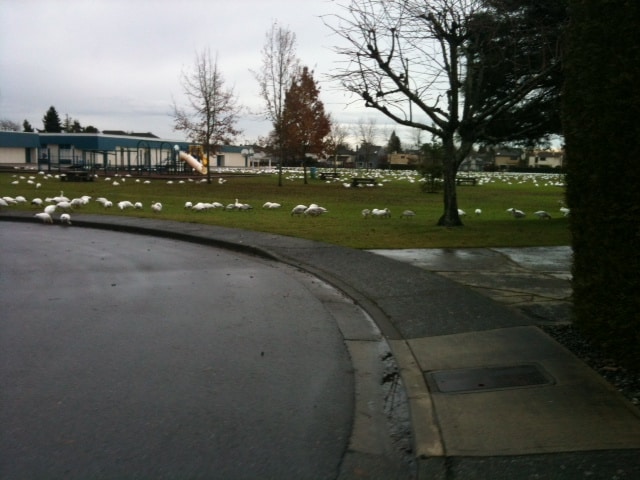 But the thing is, you’re kind of ruining everything. First of all, you peck at the grass until it’s muddy and mucky, searching for any source of food or treasure or whatever. I used to walk across that field to get to my friends’ houses, but now I can’t, because gross. Second, you all squawk as if your lives depended on not being silent. I mean, the least you could do is vocalize in unison! And third, you leave your poo. Everywhere.

It’s bad enough that we can’t let my poor dog Allie go play in the field anymore for fear that we’ll be washing geese poop off of her paws for the next century, but now I don’t even want to walk along the sidewalk that lines the field. Why? Because some of you have recently decided to EXPAND your claimed territory, actually leaving the field and hopping onto THE DRIVEWAYS IN MY CUL-DE-SAC. Um…hello? THAT’S NOT EVEN GRASS. IT’S JUST STRAIGHT PAVEMENT. WHAT ARE YOU EXPECTING TO DIG OUT OF THERE???

Now when I walk outside my parents’ house I find myself playing a sad, disgusting game of hopscotch just to avoid dirtying my shoes. Seriously, guys, what’s going on with you? Are you plotting against us? Am I living the prequel to The Birds?

Here’s the thing, geese: As much as you annoy me, I really don’t want to see you dead. That wouldn’t make me happy. I’d just like you to fly away and, um, never come back. It’s in your best interest, too, you see, because if it was up to my mother, she’d run all of you over with her Kia. (That time you almost died last week? That was her behind the wheel. And if I wasn’t in the car with her I swear she would’ve gone through with it.) Having your carcasses on the driveway is not ideal for anyone, trust.

I’m back in Toronto now, and far away from your incessant and unbearable squawks—that I could hear FROM MY BEDROOM. But I still felt the need to reach out to you, geese, if for nothing else than my mom’s sanity (she never swears, but ask her about you guys and she’s cursing like a fuckin’ sailor). So maybe you could be a little more respectful? Try cleaning up after yourselves? Maybe take some singing lessons so that you sound more like chickadees? Have baths every now and again? I’m just thinking out loud, here. The ball is in your court now. I just pray you don’t poop on it.