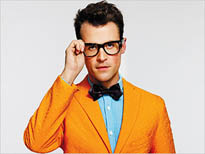 This homegrown style rebel became a recognized TV personality when he teamed up with celebrity stylist Rachel Zoe and injected serious charisma into The Rachel Zoe Project. But it wasn’t long before Brad catapulted into a household name with his own fashion series, It’s a Brad, Brad World. Elle Magazine describes him as the “style icon for (the) new generation” and the New York Times branded him as the “Zelig of fashion week.” Yep, this Canadian dandy has made waves and impressed just about everyone in this cut-throat industry.

Now, at just 34, the dapper gent with the big specs and bowtie has released a memoir titled Born to be Brad, and it is quite the delicious page-turner. Beyond his candid Hollywood fashion tales, Brad shares his battle with cocaine addiction and reveals, with humour and sincerity, his tumultuous years as an awkward kid growing up in Port Perry.

We love how Brad has blazed his own trail and his infectious personality makes him the kind of guy you really want to shoot the shit with over a long intimate dinner. Of course, if Brad wants to raid our closet and help dress us, we’d be open to that too.

If you work downtown, definitely swing by tonight! Brad will be at Brooks Brothers to sign his memoir, Born to be Brad along with doll-like supermodel Heather Marks. And even if you don’t work in the Bay St towers, we think this would be a fun little out of the ordinary thingy to do.

A roundup of New York Fashion Week’s most interesting offerings

Behind the walls of Soho House, the hottest venue at TIFF 2012

Celeb Rundown: Who was seen where on TIFF's opening weekend