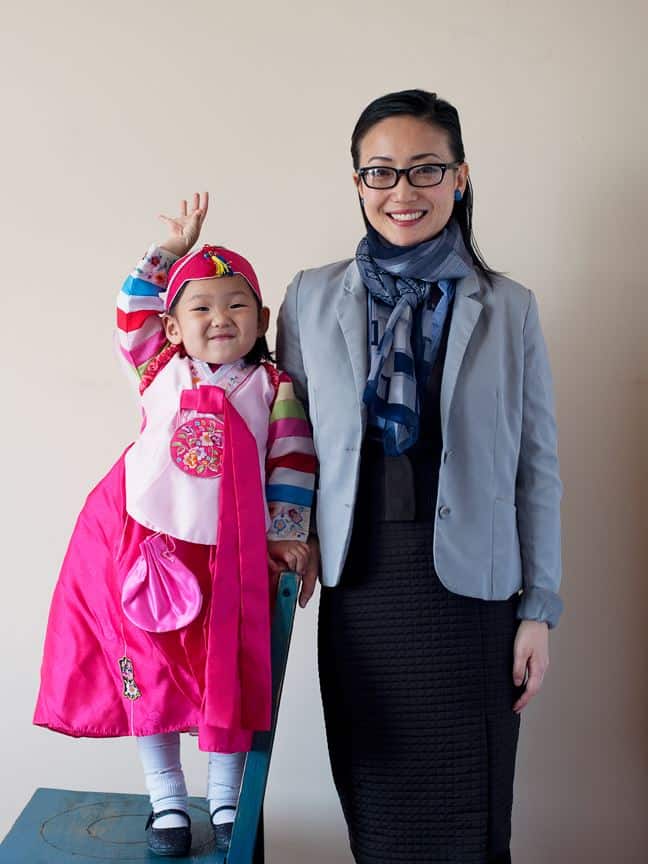 "So how, then, does a smart woman like Helen find herself, once again, relying on food bank donations to survive? It can happen more easily than you may think."
Career

Before she was a Ryerson honours student, Helen Choi was a homeless single mom

In search of a better life and a promising future, Helen Choi’s family immigrated from South Korea in 1988. At age seven, Helen was enrolled in an ESL program at the local elementary school. “I had never seen people with red hair or green eyes,” she says. “I peed my pants because I didn’t know how to ask to go to the washroom in English.” It was a challenging childhood and, like many immigrant families, Helen’s family struggled to put food on the table. “I remember my first Christmas in Canada, I got so many toys,” says Helen. “Now looking back as an adult, I see that it was all charitable donations.”

Times were tough, and they got worse once Helen’s parents separated: “My mom became a single parent on welfare; we found ourselves in even more poverty.” Beyond financial strain, Helen explains that she became so assimilated with Canadian culture that, as a teenager, the intergenerational and cultural gap between her and her mother widened. This led to huge conflict, and at the young age of 15, Helen left home. She dealt with every fear you’d imagine a teenage girl would experience on the streets. “When it comes to women’s issues, I went through it all,” she says. “Let’s leave it at that.”

It’s hard to imagine how one integrates back into regular society after living on the streets, but Helen is a real life reminder of just how resilient the human spirit is. It often takes hitting a dismal bottom in order for major change to occur, and that’s what happened to Helen. “I reached a point in my life where I was a black sheep in my family,” says Helen. “I had no friends and I was in an abusive relationship. I hit a rocky point.” Helen decided that going back to school was the most important thing she could do to feel empowered and get back on her feet. At 19, she enrolled in grade 10: “It was a very humbling experience.”

Against all odds, Helen graduated with high honours and got a student loan to attend and complete a BA in political science at Ottawa’s Carleton University. Even more impressive, she managed to beat out 1,000 applicants to do an internship exchange at Yonsei University in South Korea. So how, then, does a smart woman like Helen find herself, once again, relying on food bank donations to survive? It can happen more easily than you may think. And it can happen to anyone.

Graduating in 2008 at the height of the economic recession, Helen found herself educated and jobless. She was engaged to be married and unexpectedly got pregnant. While with child, Helen was layed off and had to work four part-time jobs in order to qualify for EI. Shortly after she gave birth, Helen’s relationship severed,  and her ex refused to pay child support. It was a scary and desperate situation that worsened when her apartment building became infested with bed bugs.

“I couldn’t stay at my own apartment because fumigation chemicals were toxic to the baby,” Helen says. “No one wanted to help me out because of the bed bugs, and women’s shelters wouldn’t accept us, also because of bed bugs.” Helen found herself in constant transit, carting around an air mattress with a three-month-old baby strapped to her chest. “I was so poor, I had $3 in my bank account. I couldn’t buy diapers.” During that time, it was a fight to find shelter each night. But beyond the logistical struggle, Helen’s character and choices were judged regularly. “People made me feel so bad about my decision to keep my daughter,” she says. “I experienced a lot of victim blaming, people telling me I should have given her up for adoption or aborted her.”

There were many who made Helen’s journey more difficult, but there were also kind souls that Helen describes as “radical angels,” or people who put themselves at risk to help her with her with laundry and provide her with shelter. (To offer a woman and child a safe place to sleep hardly seems like the work of angels, but it’s very easy to pull the “not my problem” excuse.) One person, who received Helen’s mass email for help, passed along her story to a reporter at the Toronto Star who was covering the bed bug epidemic in Toronto at that time. “That newspaper article helped me to immediately get help from welfare,” she says. “I got the immediate emergency support I needed.” And that’s when things began to change again.

Helen qualified for a community startup grant from welfare, which allowed her to pay for first and last month’s rent in a one bedroom apartment in Parkdale. “I was determined to overcome the situation I was in,” says Helen. “You can either listen to victim blaming or you can refuse to listen to toxic stereotyping.” She discovered that by volunteering several hours a week at a food bank, she could qualify for a $100 honourarium each month; although that doesn’t sound like much, Helen refers to that little extra cash as a big deal: “As a single mom, when rent is $800 and EI is $900, that extra $100 is a lifeline.”

But for Helen, volunteering wasn’t just a lifeline; she enjoyed it and found it to be her calling. She investigated how she could go back to school, found out that welfare would help pay for her education, and decided to enroll in a volunteer and fundraising program at Humber College  “I discovered that you could get a certificate in volunteer management that welfare paid for, and part of the requirement was a volunteer placement,” she says. “My placement of choice was the Parkdale Food Bank at King and Dunn. It is one of the largest independent food banks in Toronto, with up to 3,000 users a month.”

Helen went from being a dedicated volunteer to a member of the Parkdale Food Bank board of directors. The program at Humber reinforced the fact that Helen had discovered a line of work she was passionate about and, upon completion, she ambitiously enrolled in the Fundraising Management post-graduate certificate at Ryerson University’s Chang School of Continuing Education. “I’m a firm believer that education really sharpens you when you’re looking for a job, especially if you’re poor, if you’re in the margins. Or in a period of malaise.” Helen chose Ryerson’s Chang School for a number of reasons, but primarily because it was the only school that offered long distance learning through online education. “I needed that flexibility,” Helen says. “I can’t go to classes because of childcare and mobility reasons.” Ryerson also offered Helen the financial aid she needed, and she has found the continuing education student union to be most helpful with free legal services and employment counseling.

Just a few years ago, Helen was reliant on the food bank and was couch surfing with her baby girl. Now, she’s an honours student in a management program and works as the Volunteer Resource Coordinator at the Yonge Street Mission. She continues to volunteer her time giving back to the community. “Volunteering transforms you,” she says. “You learn from other community members, other volunteers, and those less fortunate that you. People say it’s a feel-good thing; it’s transformational.”

Life doesn’t always deal you what you want: challenges unexpectedly arise, and as much as we try to steer our journey, life sometimes has a way of steering itself. Helen describes her set of circumstances as “lucky.” To me, she’s a warrior and an absolute inspiration. Her story is a reminder to be grateful and not take things for granted. We aren’t immune to unforeseen hardships, and desperate times can hit even the most blessed individuals. You and I may not have experienced the hardships that Helen has overcome, but she reminds us that at our core, we are all the same: “I’m another woman living in this city, in this imperfect world.”

"So how, then, does a smart woman like Helen find herself, once again, relying on food bank donations to survive? It can happen more easily than you may think."