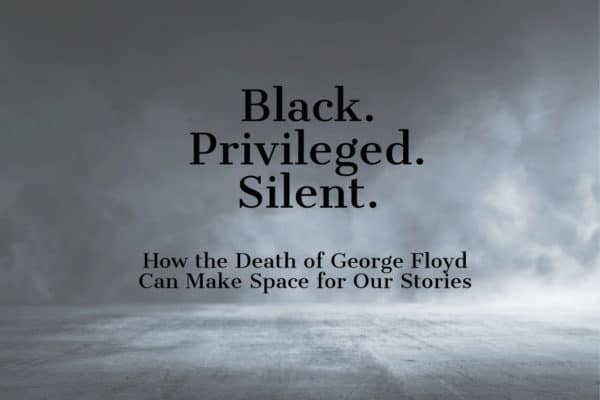 This piece was first published on June 3rd, 2020 at www.skinnerpsychotherapy.com.

George Floyd was murdered a week ago.

I don’t even know what day it was really – the days have all run together. I just know that since that day the newsreel has provided 24 hour coverage of the protests, violent and non-violent, since. These protests aren’t just in Minnesota. They are global. US. Canada. UK and who knows where else.

I am a black woman and I’ve been quiet. I’ve hunkered down in my psychological bubble and waiting for the wind to blow all this past me. But it’s not passing. Instead, I feel like I am in the centre of a tornado, with the violent winds of change whirling about, pulling at me, tempting me to surrender as I do my best to remain in the eye and avoid being swept away.

A legacy of the internal struggle between a part of me that wants to be bold and proud and another part that just wants to be accepted. Or at least, that’s what I thought the other part wanted. Until a man I never knew was murdered in a city I’ve never been.

George Floyd’s murder made me realize that internal opponent of my pride as a black woman does not want acceptance so much as it wants to feel safe. In this world, with my brown skin, to be accepted by those with power people means being safe. It has always meant being safe. The kind of safe that George Floyd didn’t get to be.

I’ve wanted change without having to risk any sense of safety. I am sure my story isn’t unique but it feels so inflamed by recent events that I wonder if I am alone in this feeling. I am educated. I am privileged. The “good” black professional who works hard to make the world feel comfortable, sometimes at the expense of the best parts of her. Always speaking so carefully so the world will hear only her reason, and not be made uncomfortable by her pain. Internalized racism, unacknowledged. How many others are there? How many others know the turmoil of wanting to fight injustice head-on but terrified to lose the tiny niche of psychological safety cultivated through years of sacrifice and cultural disconnection? In an attempt to play some meaningful role, we use our compliance in an attempt to usher those with power to a place of understanding – perhaps without knowing how close we come to being complicit the very injustice we hope to extinguish.

We don’t talk enough about inter-generational trauma in black people.

We don’t talk about how it has the power to bind people together so tightly that an attack on one can hardly be distinguished from an attack on all. We don’t see share how this trauma bond is propagated by its ability to devour its victims in an toxic internal storm of shame, anger, and fear. After this storm engulfs an individual, it consumes a family, then a community and, as we see now… a nation. When we judge behaviour without context we lessen our chances of finding true resolution. You can’t talk about today without understanding the impact of yesterday. The murder of George Floyd and the outrage that has ensued can only truly be understood through a trauma-informed lens that connects the powder-keg of historical injustices with the burning embers that litter society today.

As I scan through discussions in my professional networks, I see a hesitation parallel to my own. Like a game of double-dutch, waiting, wondering if now is the time to jump into the discussion. I see business owners weighing the costs of sharing their voices or remaining silent, the possibility of their livelihoods being impacted. Politicians biting their tongues – almost embarrassingly so – as they try to find a politically appropriate response that won’t inflame international relations. The same debate – stay quiet and wait for the storm to blow over or speak and pray like hell the tornado doesn’t turn your way.

I can’t make the decision to speak or stay silent for anyone. I can only extend a compassionate invitation to those who wish to engage in the hopes of creating positive change. Whatever your privilege. Whatever your profession. Let not knowing what to say be OK until you figure it out. Listen more than you talk. Create and hold space for the stories that are being drowned out by judgement and bias. Ask more than you tell.

There are those of us, with brown skin, who have suffered the inter-generational trauma that the world needs to understand. Those who mourn in silence for fear of losing safe ground. I acknowledge your fear, as I now acknowledge my own and I invite you, in whatever way you can… to tell your story. Tell it however carefully you want until it finally rolls off your tongue like a song. The world can’t fix what it doesn’t understand and it will never understand a story that has never been told.

So let’s tell our stories.

I can’t change anything for George Floyd’s family. I can’t change American politics or race relations. What I can do, is start a new conversation, one that has room for reason and for pain. I make no attempts to offer solutions for a political system I am not apart of, but if my story can contribute to the greater global good, then I will no longer be afraid to tell it.

And the storm can take me where it may.

Bonnie J. Skinner is a Registered Psychotherapist and the Owner of B. Skinner Coaching and Therapy. Additional publications by Bonnie can be found at www.skinnerpsychotherapy.com/blog.