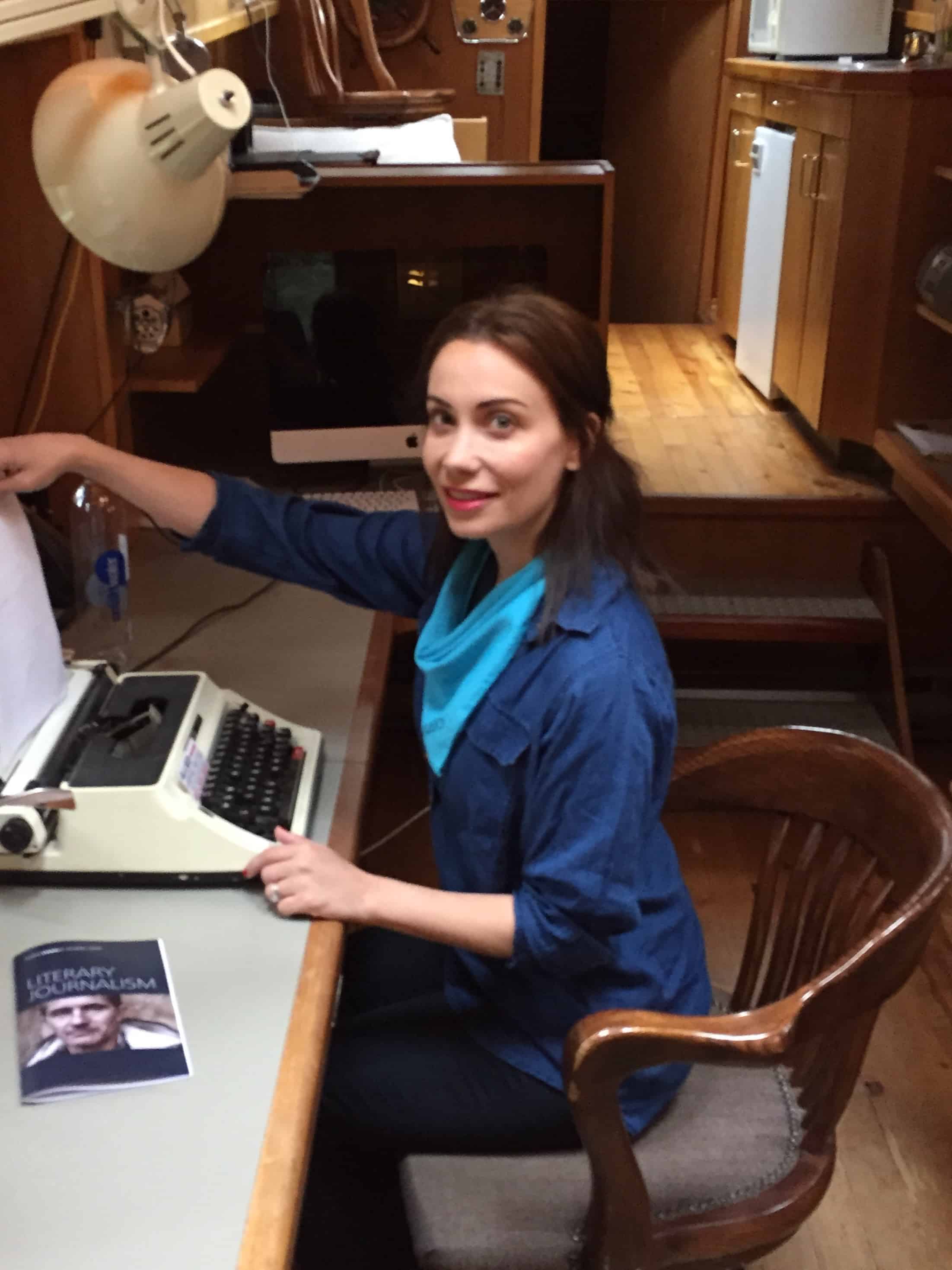 The media landscape is shifting. Layoffs, cutbacks and uncertainty about the future have cast a shadow over much of the industry. In this series, we talk to notable women working in journalism to find out how survive (and thrive) in the current climate. For this installment, we chatted with Alexandra Kimball, freelance writer.

AK: Oof. OK, you asked! I did a BA in Creative Writing at York, and then a Masters in English literature at U of T. After that I worked in admin in publishing for a year, all the while trying to get published as a freelancer, or move to an editorial role, but nothing was happening, so I decided to go to grad school for English. I went to Western University for that, and that took about 4 years. My thesis was about Oscar Wilde and newspapers.

I actually thought, during my PhD, that I would graduate from my doctoral program and either just become a tenure track professor or go on to immediately work for a magazine or something. So I was still pitching article ideas to magazines, and I did wind up publishing a few things while I was still in school. But this was pretty naïve, as when I graduated from the PhD I couldn’t find any sort of job at all – let alone one in academia or journalism – for around half a year.

Eventually in 2008 I found work as an editor and copywriter for a marketing company, and after that, as a copywriter for a non-profit. This all paid pretty poorly so I used to copywrite on evenings and weekends too. And the whole time I was pitching to magazines regularly but not really getting anywhere. No one knew who I was and I had like 3 clips from magazines in London, Ontario.

In 2010, I sort of hit a breaking point. I realized I wasn’t going to get anywhere with my existing clips, so I made a website and started assigning myself stories. It was a fashion blog, which everyone seemed to have at the time. I wrote reviews, essays, all sorts of things and put them on the website. Basically, I was creating my own clips, and then when I pitched, editors could see what I could do, which I felt was much stronger than what I had done.

In Spring 2010, it worked! I had a longish story accepted by The Walrus and with that on my CV, I was able to get stories placed in national publications. This allowed me to drop extra jobs 2 and 3. In 2012, I inherited money unexpectedly, so was able to pay off my student loans and drop job 1 as well. Concentrating on freelancing, I had some great steady work that paid about the same as my marketing job, and after a few months, editors were assigning me stories, which was awesome. I’ve been a working journalist ever since, which was really my goal from the beginning.

Network. Know editors and keep up relationships with them. Read constantly, and publish everything you can, even if you think it’s weak. Perfectionism is the enemy of writing.

It’s tempting to think that the fluidity of media is a new, post-Internet thing, but this industry has been a place of rapid change from the beginning. That said, what we’ve seen in the past 5 years is a weakening of the “old boys club” nature of media. Many magazines have shut down their unpaid internship programs, which allows journalists from non-traditional backgrounds to enter the field. There’s also been a fantastic pressure from the margins to diversify journalism – women, working class journalists, and journalists of colour are more visible now, publishing their own stuff on social media, Tumblr, etc. They are consistently calling out prestige media for their elitism and shitty coverage of certain issues. This critique was always in place, but now with social media, it’s much more visible, and I think it is affecting old, prestige media. I’m seeing perspectives and voices in places like The Times that would have never made it 5 years ago.

Another thing I’ve noticed that isn’t so great is that in-house jobs in publishing and media are becoming much more scarce. The in-house jobs I have seen are generally contracted positions, not salaried ones. So what’s been good for freelancers has not been so good for in-house editors and writers.

Writing – and by that I mean writing what I want to write, in my own style – has always been the only thing I imagined myself doing. Frankly, I am deeply unhappy doing anything else for a job. I’m much more successful as a journalist than I was at anything else, including academia.

The number one challenge is the same as the challenges in being a writer at any point…money. Many big publications still don’t pay much, and you can wait a year for a cheque. Number two is trolls. Pre-Internet, if a reader wanted to abuse a writer, they would have to write a letter, and it wouldn’t get published. Now trolls can not only make sure you see their response, but they can saturate the entire blogosphere with it.

What do you enjoy most about being a writer?

I love the writing process itself…that’s where my major thinking happens. Often I’ll change my mind about a topic as I’m writing, and getting to that deeper layer of insight is really satisfying.

I’m excited about all the new voices and talent coming into play now. I think that’s exactly the kind of shake-up we need. And there are so many new projects and publications I just adore, like The New Inquiry, Intern Magazine, and Partisan.

What I’m afraid of is the diminishing of paid positions and in-house staff. I’m concerned that the era of the professional journalist is closing. But this industry is always changing, so who knows how that will resolve.

Write well. I’m sorry if that sounds harsh, but it’s true: if you are a mediocre writer, and you’re not, like, the publisher’s daughter or something, no one will publish you (and they shouldn’t). You don’t need to be perfect, but you do need skill.

To improve your writing, read. Read everything and anything. I’m always shocked when I hear about someone who wants to be a writer but doesn’t read newspapers and books and magazines and blogs. I think because this industry has become increasingly glamourized (magazine writer is the go-to job for any rom-com heroine) it can attract people who see it as a way to have social status or even fame. Or some people just want a “cool job.” But the writers who are really meant to be writing, I think, are natural readers and writers.

I spent July 2015 developing one story in the Literary Journalism program at the Banff Centre for the Arts in the mountains in Alberta. It was a writer’s dream: the centre totally sets you up to write and think and do nothing else for a whole month. No cooking, no laundry, no worrying about other assignments…just writing and editing and spending time with other journalists all doing the same thing. I really can’t stress how amazing that experience was; I’m not sure how I’ll be able to top that!

I enjoy trying to get to know a source before jumping into a formal interview. Not only because it makes the source more relaxed, but because knowing something about that person’s character and idiosyncrasies generally helps me understand more of the background of the piece and direct my questions better.

I think the key to pitching is to think about it from the editor’s perspective. Editors are overworked and overwhelmed, so when they get a pitch from a freelancer they will want to be able to get in and out of the pitch quickly, so keep it short and friendly.

I’ve noticed that younger writers who have been in school recently tend to write these overly formal, undergraduate essay-style pitches. That’s not good. The editor will want a sense of your actual writing style. So write the pitch in the style that you imagine the story in.

I actually ignore all of this. I imagine I’m assigned certain stories because editors anticipate lots of reads and traffic, but I don’t really think of traffic once I start researching and writing. Readers can sniff out inauthenticity pretty easily; if you are always writing with the profit margin in mind, your reader will be able to tell and you’ll lose credibility (and ironically, traffic).

Alexandra Kimball is a freelance journalist and essayist living in Toronto, where she was also born and raised. She is a former editor at Chatelaine. Her writing has appeared in major publications across Canada, including The Globe and Mail, The Walrus, Toronto Life, Hazlitt, and Flare. Follow her on Twitter.

Young Creatives: Get A Boost On Your Future Career This Sunday At WAVECON