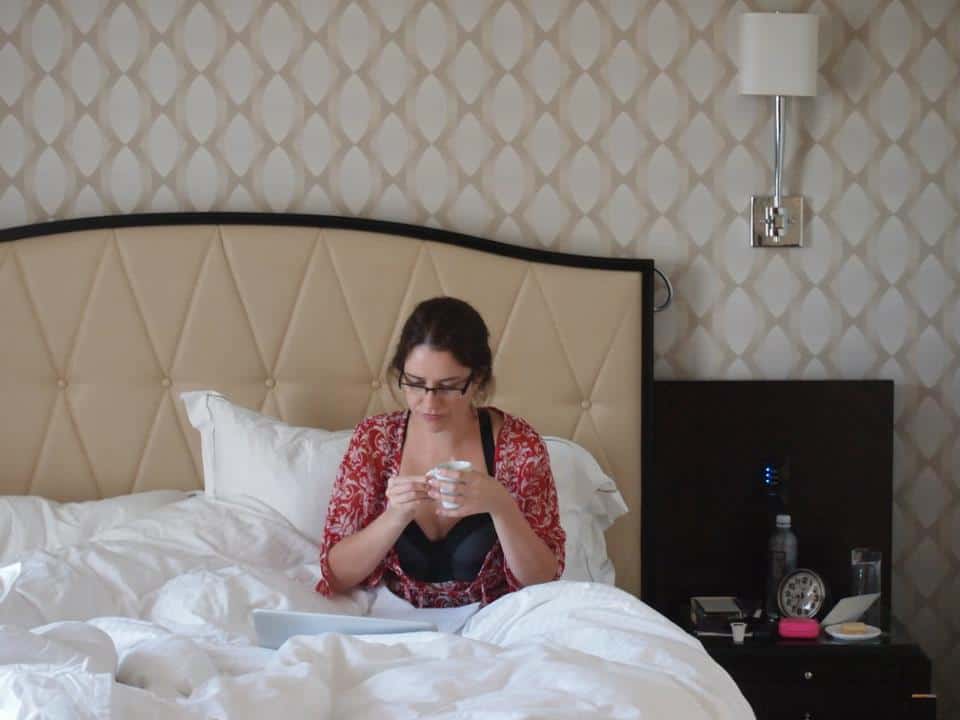 The media landscape is shifting. Layoffs, cutbacks and uncertainty about the future have cast a shadow over much of the industry. In our new series, “Bylined: Women in Journalism,” we talk to notable women working in journalism to find out how to survive (and thrive) in the current climate. For this installment, we chatted with Rosemary Counter, freelance writer, reviewer & editor.

RC: I took English and Women’s Studies at U of T, then I took a certificate in Book Publishing at Ryerson. When I wasn’t loving publishing just a few months in, I went back to Ryerson for two more classes: The Art of Pitching and How To Write a Feature. Then I just pitched and wrote over and over again, trying to get bigger and better clips.

One teacher said, “Quote the sexy stuff,” which I think about as I write a lot; she means only quote someone who’s saying something better than you’d say it. Someone told me to always be kind to the intern; she’ll be the editor tomorrow and maybe the boss in ten years. She’ll remember if you were snooty too. And nobody gave this to me, I just took it, but Melanie Griffith in Working Girl: “Wise up and don’t take the whole thing so seriously.” At the end of the day, it’s just a job and there’s lots more.

Freelance feature room in magazines is becoming rarer and shorter. At the same time, there are many more freelancers fighting for that spot. It’s not a great combo.

I consider myself a writer more than a journalist, but journalism could at least pay me to use my writing skills. I can’t believe I’m about to say I chose journalism for the money! Ridiculous, but true.

I work at home, all alone, so I think the hardest part is always the isolation factor. I make big efforts to call a friend, take a walk, etc., in hopes I won’t go too stir crazy. I need to get out and about to find new ideas too; otherwise, I end up writing essays about not leaving my apartment. It ran in Elle, true story.

That’s easy: Having no boss and getting to always choose what I’m going to work on next. If I finish something research or thematically heavy, I’ll pitch a humour essay. If I’m sick of my house, I’ll take a travel assignment. I also love finding ideas in odd places; I recently was watching Jeopardy! with my dad and he complimented Alex Trebek’s suits. I wondered who dressed Alex and how, so I found out, interviewed him, and sold the piece to Vanity Fair. My dad was impressed just a bit.

Um yes, always. I worry that print magazines will go extinct and we’ll all be floating around the web hoping someone will find us (and pay us). I like to think that people will still pay for good content, but lots of people expect their journalism for free and lots of other people are willing to write it for free. Scary times on both fronts.

In my case, pitch pitch pitch. Don’t be worried about punching out of your weight class (who cares if someone thinks your idea is dumb or ignores you?). And don’t let rejection kill you. Remember, it’s not personal. Never cry over a pitch.

At the moment I’m mostly enjoying this old awful dating story that became a New York Times – Modern Love and then their premiere podcast in January. I also loved going to Indigo and creeping people people as they browsed my book. Not healthy, per se, but super fun.

I try to be super sweet, make the interview more like a conversation if you can, and save any aggressive questions for the very end. And you know that momentary awkward silence after someone’s finished talking and they’re waiting for you? Don’t fill that. That’s when people say, “Because…” and better explain whatever they were saying before. Actually listen and follow-up with questions. Don’t even think about reading questions off a list.

Ohmigosh, so many things. A great pitch is succinct, timely and irresistible. It’s something that only you can write. It arrives to the right editor at the right time and they love you for it. I actually teach a whole seven-week course on this at Ryerson’s Continuing Education, which I imagined and created and, yup, pitched.

I hardly even understand this question so I’m just gonna say no. I just try to do what I’m doing and if people read it, great. If they like it, even better.

Check out Rosemary’s work featured in The New Yorker and Maclean’s.