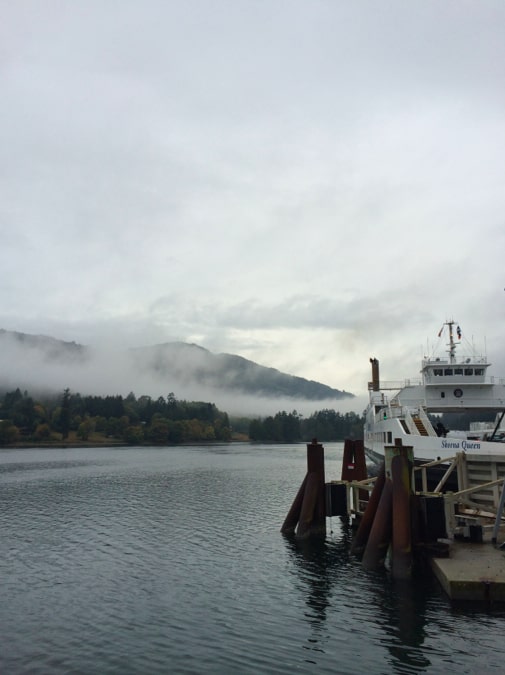 Looking down the harbour from my sleepy, seaside village on the south end of Salt Spring Island. The view’s OK, I guess.

I’m a nester. Within 48 hours of getting the key to my dorm room at journalism school in Halifax, I had made curtains, created a frame feature wall and cultivated a mini-jungle of potted palm trees. I get endless enjoyment from creating spaces that make people feel at ease and provide me with a retreat from the outside world (I’m a Scorpio—I like my shell). A major part of the Toronto-to-Salt-Spring-Island puzzle was the promise of a more permanent home we could (kind of) call our own.

As the idea of moving began floating around, the possibility of renting my grandmother’s old cottage kept coming up. For 20 years, my very English granny had lived in a small mock-Tudor house, with four huge, productive apple trees in the yard, at the centre of the tiny seaside village on the south end of Salt Spring Island.

Every day after school, I’d make my way to Apple Tree Cottage where Gran would feed me freshly made Scotch pancakes slathered with homemade (garden-grown) raspberry jam and let me watch Punky Brewster and Saved by the Bell. On sunny days, she’d send me outside to pull up dandelions for a penny a piece in her perfectly imperfect English country garden.

When she passed away nine years ago, just shy of 102 (I held her hand as she died, but that’s a story for another day), her house went to my dad and his sister. Unwilling to let a piece of family history go just yet, my parents bought the cottage and rented it out to cover the mortgage. And there it sat, waiting: for them to retire and move in; for one of my brothers to bring their young family to the island; for them to sell it; or for me to come home.

I had been dreaming about the latter possibility since about 2011 (and for many years before that, if I’m being honest; but it wasn’t until a few years ago that it became a realistic option). I’d sporadically turn to my husband while we were watching Netflix in our 11th-storey, one-bedroom apartment in midtown Toronto and say, “You know what would be awesome… tearing out the corner bench seat and turning that into the dining area.” 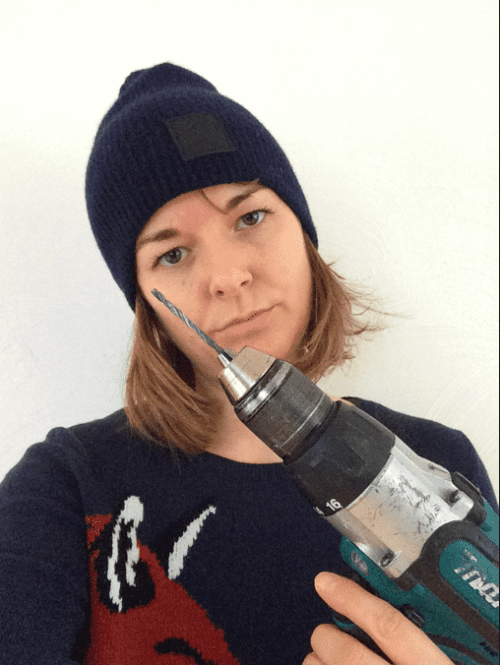 Getting to know my way around a drill…while wearing cashmere.

No preamble, no pretext, but he knew exactly what I was talking about and where…because I talked about it all the frigging time. I’d lie awake at night arranging make-believe furniture in my head trying to come up with the perfect configuration for Granny’s cottage. (As I said before, I’m a nester.)

When we landed at my parents’ house on Salt Spring late this past summer, bewildered and homeless, getting into Gran’s was a top priority. The house had a new wood laminate floor and some fresh paint here and there, but beyond that— after nearly a decade of renters coming and going almost annually—the property needed a lot of love before we could move in. On the day we got the keys from the previous tenant, we met our new soon-to-be neighbour who said, “I’m so glad you’re moving in next door…because it’s part of the family, I know you’re really going to care for it.” 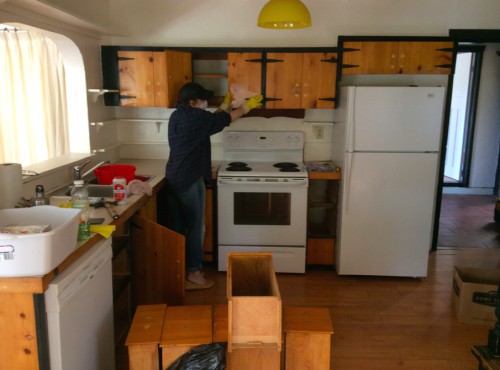 Scrubbing away a decade of thick, black grime from the kitchen cupboards.

After a disorientating first two weeks sleeping in my old bedroom at my parents’ place (with a spouse in tow!), buying two cars, ordering a new couch and bed (my first time not getting such items off of Craigslist… or the side of the road), and getting my husband ready to start his daily four-hour commute to school on unfamiliar roads and a ferry, we began working on changing that little house with an overgrown orchard back into Apple Tree Cottage. 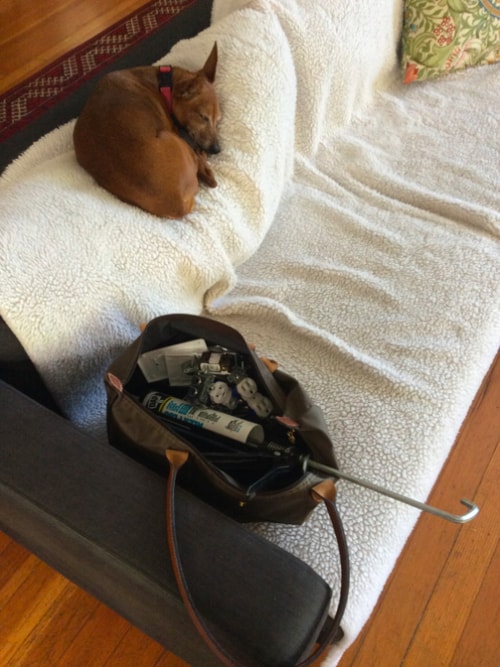 When I was a fashion editor my bag would have been filled with lipstick, perfume, press kits and Apple products, now it’s bursting with silicon caulking and electrical outlets.

Mom cleaned up the yard and volunteered herself for rat patrol. Yep, that’s one of the fun little facts about living out here — in the city, all the vermin set up shop in the sewage and subway systems; in wide-open spaces of the country, they’ve got nowhere to hide (except in your garden shed, unfinished basement and cozy wall insulation). 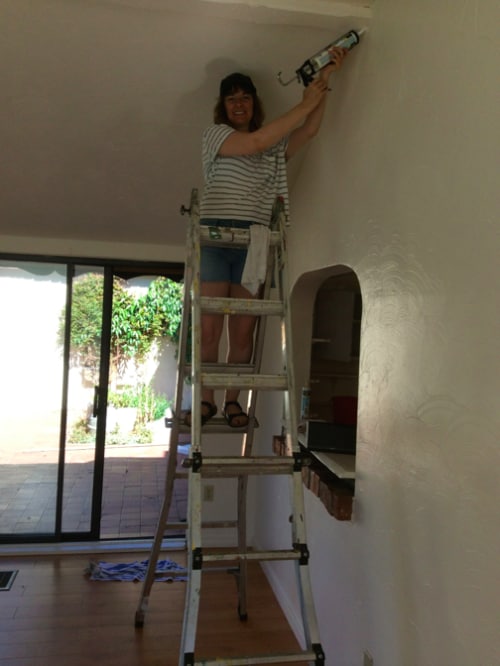 Ruining hundreds of spiders lives by filling in their homes with white caulking.

Every day for three weeks, she’d set a trap in our tool shed, and every day she’d bag a rat. “At least they’re big, healthy looking ones, not those skinny, diseased city ones.” (Not helping, Mom.) We made a pact not to mention her rodent-hunting successes to my husband for fear he’d decide I sold him a pack of rat-omission lies and hightail it back to the city.

Since he was gone each day before sun-up and my dad was travelling a lot for work, the bulk of the initial renovations rested on my shoulders, which is exactly where I wanted them to be. I had a vision—one that I’d been mulling over for a long time—but it was also the acute focus of working with my hands day in and day out that kept my mind from running away with me…

What are we doing here? Why is everyone moving so slowly? Is that man walking through the village really wearing a cape and carrying a staff? How is this ever going to work? How long does Dad actually have? How can we make that time count? Will he see my future children? Can I even have kids? How is Mom going to keep going afterwards? How are we going to make enough money to stay here? Will my husband like it? Will I? 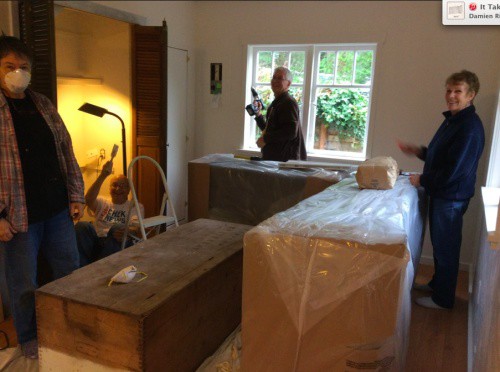 If you’re operating an electric sander or a power drill and you want to keep your fingers, you have no choice but to be very present. It was the type of practical meditation that my pragmatic personality needed in order to get me through the first stages of culture shock at island life and reality of living with a loved one dealing with cancer.

I washed walls, scrubbed windows, sanded doors, painted baseboards, demolished shelves, plastered holes, assembled Ikea cupboards, and went through two dozen tubes of white caulking trying to seal up all the cracks, spider caves and draft tunnels that peppered the 70-year-old cottage. I could almost feel the house thanking me as each layer of inattention was scraped away.

Because I’m trying to get pregnant, I really wanted to stay away from anything too toxic. My parents’ cleaning lady (fondly referred to as their “house engineer”) painted the high vaulted-ceiling’d bedroom and the old kitchen cabinets. She also ripped out the three layers of molting yellow carpeting in the attic and painted the floor a soft grey. A finishing carpenter with a long goatee and various heavy-metal T-shirts (plus a solid work ethic and heart of gold) replaced the kitchen counter top (which had completely rotted through) and made some high storage cupboards in the bedroom.

On a weekend visit up from Seattle, my aunt and uncle (an aero-draftsman) installed a whole new set of perfectly measured white accordion blinds and fitted the resin handles for the kitchen cabinets. My other aunt brushed down the decks and steps with bleach to get rid of the moss and slippery slime…and would bring me over cups of mid-afternoon tea (she has a holiday cottage across the street). 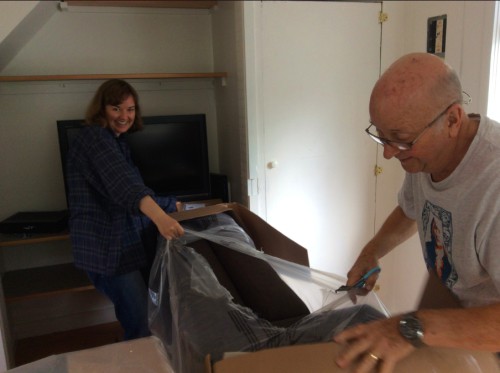 Dad and I unleashing the new EQ3 corner couch for the TV nook.

My jaw acne disappeared, my hives began to calm down and I dropped five pounds.

But what really made this whole process so worthwhile was the three weeks Dad basically took off from doing paid architectural work to come do unpaid work with me. Each night we’d go through a list of the next day’s projects and take note of what we needed from his workshop or the hardware store to complete them.

I’d do all the painting prep work, and then he’d do the topcoats. I worked the breaker board, as he replaced all the cracked electrical outlets with childproof ones. He’d go into the soggy basement (a.k.a. the rat kingdom) to drill holes through the floor joists for new wiring, and I’d pull them up into the house. When the en-suite sink began leaking, we took it apart to figure out what was wrong, and then got the parts to fix it ourselves. And when it began leaking from a different spot, we mended that too. 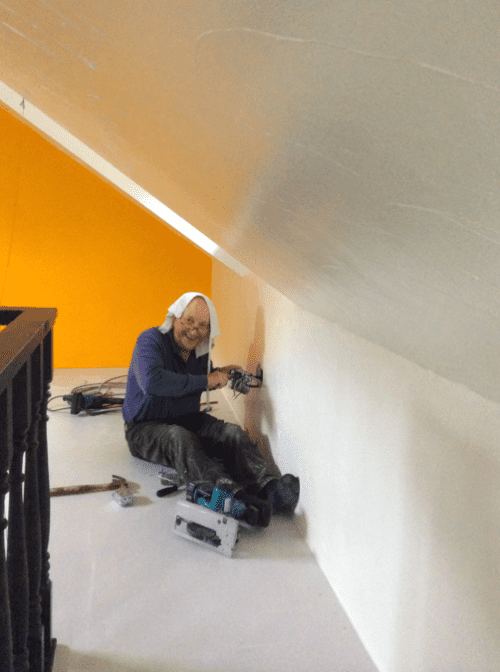 Dad putting in new electrical outlets upstairs in the newly christened “office”. He has a towel on his head to soak up the sweat from his hormone-therapy induced hot flashes.

It was grueling and it was grimy but, with so much other uncertainty in our lives, it gave us a tangible goal to work towards together—turning a tired rental house into a family home once again. And I, surrounded by so much love, had finally landed in my new nest. 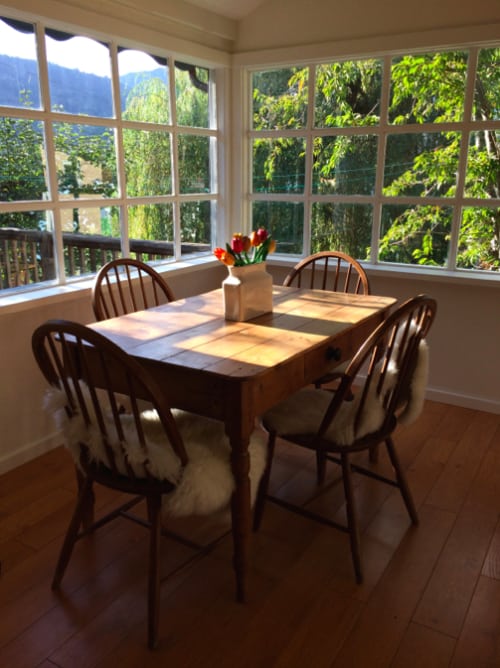