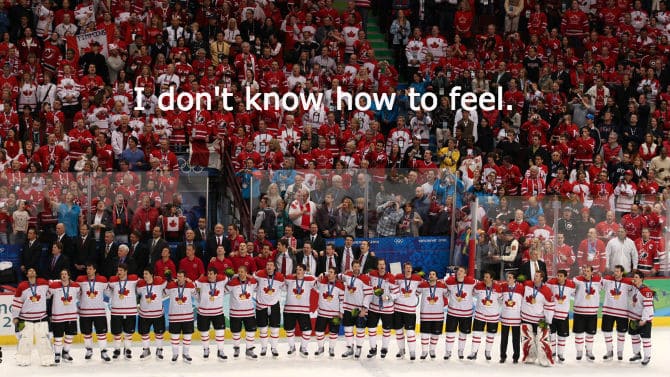 Figuring out my feelings on Sochi amidst global and personal politics

I do not care about hockey. I never have. At its best, I think it’s like watching exciting knitting—the players zooming back and forth across the screen, scoring, not scoring, falling, trying again. I hate the fighting in hockey. I think its ludicrous that behaviour that would have you clapped in irons on the street is totally acceptable and even encouraged in men’s hockey in this country. I think we have some serious issues to talk about in terms of its professional liability, with head injuries, both physical and psychological that plague players in an overly-macho tough guy culture.

All this aside, I found myself hurrying up the steps of the Oxley today at just before 2 pm. I wanted to catch the end of the men’s semi-final Olympic game. I followed the sounds of cheering and groaning up the stairs to the narrow sports room above the bar. There, business people crammed in together to watch the last 2 minutes of what was undeniably a nail-biting game. The barman ushered me to the back of the room, where a gent gave up his seat for me because he “couldn’t watch.”  We screamed together, we groaned together, people jumped up and fist pumped the bar when we won. Through all this, beer was served, and outside, the traffic lights kept ticking over on their automatic timers, green, yellow, red.

I was happy to be there, happy to have something to care about in common with this group of strangers. Happy to have the rules of normal life suspended for a few minutes, where we can all have a beer at 1:30 pm and scream and cheer out loud about something as seemingly silly as a hockey game.

Because I do have very divided feelings about this. At the beginning of these Olympic Games, I made a conscious decision not to watch. I am a supporter of gay rights, and I think Russia’s policies are barbaric and the Olympic committee’s refusal to re-locate the games was a slap in the face to everything the incredibly brave Russian gay community has fought for, and gay men and women the world over who face discrimination and persecution every day. My tiny drop in the bucket of protest would be denying broadcast networks the opportunity to count me as a viewer for their sponsors, to conscientiously object.  Yet here I am, circumventing this rule with a pint and the Oxley’s TV, getting really into a cornerstone event of the Russian-hosted Olympic games.

I also have severe discomfort about the attention hockey games are getting when people are literally fighting for their lives in places like the Ukraine and Venezuela. This morning, I read about the tentative resolution the Ukrainian government has reached, and viewed incredible photographs of people taking terrible risks, including death, to defend their political beliefs.

In the face of this immense human suffering, how can we drink beer and cheer for a game? A playwright of my acquaintance wrote on her Facebook page that it was akin to watching the 1936 Olympics hosted by Hitler. At the time, I thought about how right she was. Remembering the context of those Olympic Games, weren’t Jesse Owens’ multiple gold medals all the sweeter for have triumphed in the face of a regime that thought he was racially inferior? Wasn’t the international community right to celebrate his win, right to be there and report it and share it with a wide audience? His sporting achievement went far beyond merely being a personal one.

I am here in the bar, writing in the warm glow of the better part of a pint of bitter and the knowledge that Canada’s men’s team won a big game today. I don’t know the answer to my own questions. I think the best I can manage right now is that life is always an incredible jumble of sweet and sour, joy and sorrow. Canada celebrates a hockey victory, and in another nation, people are living in makeshift camps in a public square, risking death to fight an unjust regime. As a little girl, I used to think about how every day it was someone’s birthday, someone else’s deathday,  someone’s wedding day, someone else’s laundry day. Every day, the whole world over encompasses a multitude of events, happenings, personal stories. This knowledge does not absolve us of the serious responsibility we have to bear witness to each other’s suffering, to speak out against injustice, to put our money where our mouth is and to fight the good fight.  It should galvanize us to live more fully, to know that every time we cheer, someone else is weeping, that for every new friend we make, someone else has just lost someone dear to them. How are you going to square that for yourself? For me, it’s an ongoing struggle.