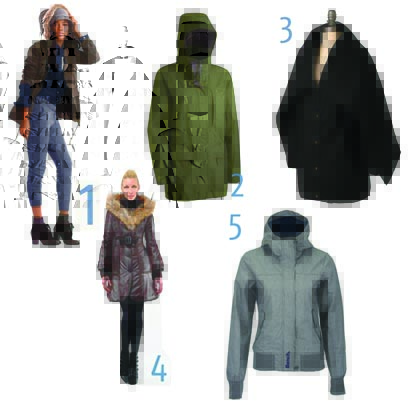 The problem with a surprising majority of fall coats is that they lack that fundamental, oft-forgotten hood element – you remember, the one that covers our precious heads from the rain?

Now, the problem with November showers is that, unlike the proverbial May ones, they do not lead to flowers, only to more rain. And then snow. Unless of course you’re reading this in Vancouver, in which case they only lead to an eternity of more rain. In such conditions, those on-trend canvas trenches, tweeds and denim jackets don’t really bode well in the sadistic wrath of the weather gods.

Thus, after a frizzy, drowned-rat of a week I’ve had it with my stupidly impractical (though painfully adorable) trench. And in case you feel the same, here are five rain and trend-friendly fall jacket ideas.

1. Utility Parka, Joe Fresh, $49. Try something like this if you’re into that almost perpetually on-trend military look. It’s a great alternative to canvas, but a mid-point if you’re not serious enough to step into Gore-Tex territory.

2. Monsoon Jacket 2, MEC, $ 195. But if you are ready to cross over into the valley of Gore-Tex, right this way, two layers of it of rain annihilating protection. It’s called the Monsoon Jacket, so we’ll let the name do the talking, though it’s worth pointing out that it doesn’t stray far from army chic.

3. Rain Delay Coat, Modcloth.com, $155. This one loses points for being made of (organic) cotton canvas. Call me a hypocrite, but first, please notice that long cape that exists purely to be pulled over your head when the heavens open. Pull the toggle strings for ultimate snugness and then try complaining.

4. Candice coat, Mackage, $620. It’s a little closer to a winter jacket but hell, if you’re going to spend your rent on a coat, you’re going to want to wear it as long as you bloody well can.

5. Smartie Jacket, Bench, $145. For something a little sportier, try this bad boy. Brands like Bench that cater to more of a surf/skate clientele tend to be weather friendlier for their adventurous customer, but keep the shapes and silhouettes current.