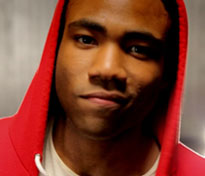 Donald Glover has been blowing up recently with his role on Community and successful music career.  His latest comedy and music tour has been selling out, and with good reason.  I had the pleasure of seeing him perform at the Commodore and he met all my expectations.

The show was somewhat awkwardly timed at 8:30, and there was another show after his performance.  It made for an early Friday night, but one that was still full of partying.  The crowd was random but good-natured, and super pumped to be there.

Glover started out with a short comedy set, complete with well-constructed videos featuring guest bits by celebrity friends.  He didn’t rely on cheap, crude humour to get a rise from the audience.  The jokes were funny, thoughtful, and a little outrageous.

Instead of an intermission between sets, Glover played a video conversation between himself and “future Donald” that was centered around whether or it he should continue his music career.  It was funny, if a bit long, and a clever way to give himself a rest while keeping the momentum of the show.

When he came back out and began to rap the crowd really starting getting riled.  His sense of rhythm and timing was amazing.  Glover’s also an exceptional performer.  He was clearly giving it his all on stage and the crowd was eating it up.

Donald Glover is a seriously good performer, and I was happy that I got the chance to see him.  If his tour is stopping somewhere near, I suggest you grab a ticket.  You won’t be disappointed.